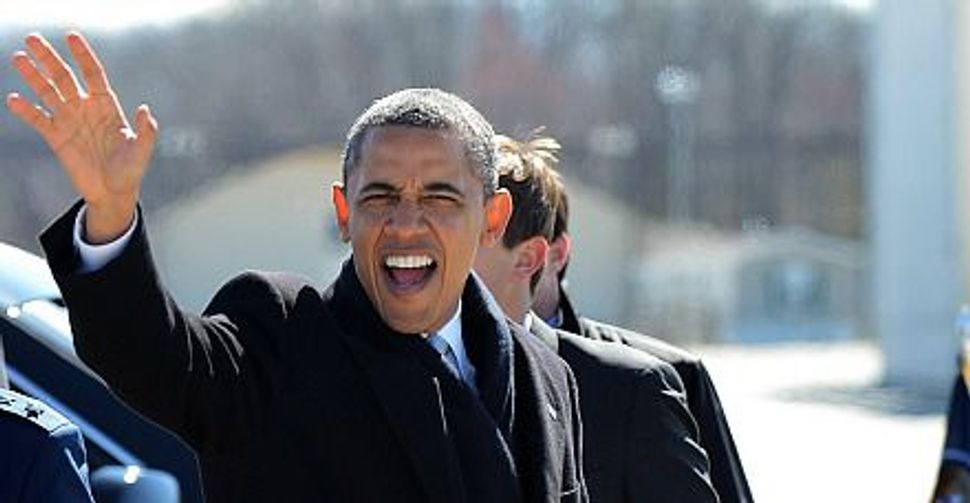 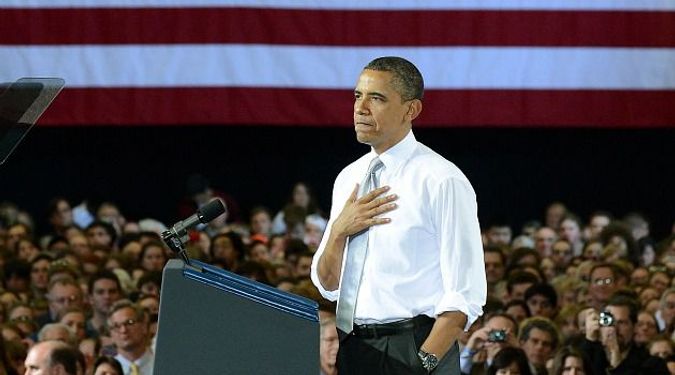 Riding High: President Obama has opened up a big lead among Jewish voters. Some 62% of Jews told pollsters they will vote to re-elect him, the same support he had at this juncture four years ago. He later wound up with 78% of the Jewish vote. Image by getty images

With the battle over the Jewish vote in full swing, a new poll suggests that Democrats have little reason for concern: Jews are firmly in President Obama’s corner.

And the reason, the poll suggests, has nothing to do with Obama’s views on Israel or Iran. It is all about the economy and social justice.

The reason for Democrats’ strong showing in the poll, which was released April 3, lies in deeply rooted views of American Jews on social issues, including traditional liberal stances on improving the economy and reducing the gap between rich and poor.

“Whoever wants to appeal to Jewish voters has to go through social values,” said Robert Jones, CEO of the Public Religion Research Institute, the not-for-profit, nonpartisan organization that conducted the survey. “Our poll shows that you cannot appeal to these voters through the single issue of Israel.”

RELATED: Jim Gerstein says Obama’s only problem with Jewish voters is that there aren’t more of them. Michael Bloomfield and Mark Mellman say predicting the Jewish vote is getting more complicated. Amy Cohen and Anna Greenberg write that Obama’s effort to hold onto Jewish support is part of a larger task of keeping his coalition intact.

For Democrats, the main takeaway from the poll was Obama’s tight hold on Jewish voters, virtually identical to his standing in the community in a poll taken in June 2008.

“This is where I’d expect him to be, so I think he’s in a strong position” said Democratic pollster Jim Gerstein, who predicted that Obama will add to his lead once the GOP chooses its candidate.

Not so, argued Matthew Brooks, executive director of the Republican Jewish Coalition. He said that Obama should be at or near the 78% of the Jewish vote that he won in the 2008 election.

“This shows Obama has a real Jewish problem,” Brooks said.

The survey showed that 62% of Jewish voters planned to support Obama in the November election, compared with 30% who said they will vote for one of the four Republican candidates.

One of the new poll’s most pronounced findings was the very small number of Jewish voters who had lost their faith in Obama. According to the poll, just 7% of Jews who voted for Obama in 2008 now prefer a Republican candidate.

While much of the political debate within the Jewish community has centered in recent months on the issue of Israel and on Obama’s relations with the Jewish state, the poll suggested that the issue was overblown. It backed up previous poll data showing that Jewish voters did not view Israel as a deciding factor when voting for president.

A majority of 51% pointed to the economy as the issue most important to their vote, followed by gaps between rich and poor (15%), health care (10%) and the federal deficit (7%). Only 4% of Jewish voters said Israel was the most important issue for them when deciding who should get their vote. Even when asked to name their second-most-important issue, Jewish voters gave the issue of Israel only marginal importance.

The data would suggest that the Republicans’ focus on attacking both Obama’s record on Israel and his troubled relations with Israeli Prime Minister Benjamin Netanyahu was having little, if any, traction.

Even conservative pundits concede that Jewish voters are swayed more by domestic issues, and the voters may be particularly sensitive to GOP candidates’ conservative rhetoric.

“Concerns about Obama and Israel have been trumped by the right-wing language of Republican candidates,” said Frank Luntz, a Fox News contributor and Republican pollster. “The Jewish community is looking at the fight over abortions and contraceptives and religion, and they don’t like it.”

PRRI’s poll supports this explanation. Jewish voters, the survey found, are as liberal and socially progressive as any slice of the American electorate.

Nearly half of all surveyed point ed to a commitment to social justice as the most important quality. Support for Israel came in a distant second, with 20% of Jews viewing it as an important quality, followed by religious observance and cultural heritage.

Jews strongly believe that the government should play a greater role in reducing gaps between rich and poor, and an overwhelming majority of them support the “Buffett Rule,” which calls for increasing taxes for the rich. Most Jews (52%) state they’ll agree to pay more taxes to fund programs that help the poor.

Jewish voters checked all other boxes when it came to defining liberal political positions. They strongly supported abortion rights (93%), same-sex marriage (81%) and environmental regulation (69%). They said the Supreme Court should not overturn health care laws.

Despite strong support for Obama, some Jewish voters were critical of his first-term performance, possibly because they felt he has not achieved enough of their liberal objectives.

Half of the Jews identifying as Democrats expressed satisfaction with Obama’s achievements, but 31% of Democratic Jews said they were disappointed, while 13% said they were worried and 2% said they were angry. Luntz told the Forward that his own polling data suggested that Jewish support for Obama does not have the intensity it had in 2008.

Of the 30% of American Jews who said they’ll vote for a Republican candidate, the clear choice was Mitt Romney, with 17%. Rick Santorum, Newt Gingrich and Ron Paul all trailed far behind.

Brooks pointed to the 30% figure as a “fabulous” number for Republicans, who have not seen such numbers since Ronald Reagan’s run against Jimmy Carter in 1980.

The poll also included nuggets of information about Jews’ views on the Middle East conflict. A slim majority of 54% of Jews thought relations between the United States and Israel were as good as they were in the past, but a significant minority of 37% said relations have worsened in recent years. This feeling was stronger among Republicans, older Jews and those affiliated with synagogues.

When it came to Obama’s handling of the Middle East conflict, only 20% agreed both with his policies and the way they’ve been executed; 15% liked the policies but not the way Obama carried them out, and 28% disagreed with Obama’s policies on the issue. More than one-third of American Jews do not have an opinion on Obama’s policy toward the Israeli-Arab conflict.

A solid 53% of Jews backed the establishment of a Palestinian state.

On Iran, nearly six in 10 American Jews supported action against Iran’s nuclear sites if economic sanctions failed. Republican Jews felt stronger about this issue than Jews who voted Democratic. At the same time, Jews did not rank Iran as Israel’s greatest problem. Nine out of 10 respondents pointed to the Israeli-Palestinian conflict as a major source of concern, compared to 83% who cited Iran.

The poll included 1,004 self-identifying Jews, including those who stated they are Jews by religion or by ethnicity, or that they are culturally Jewish. The poll’s margin of error is 5%.