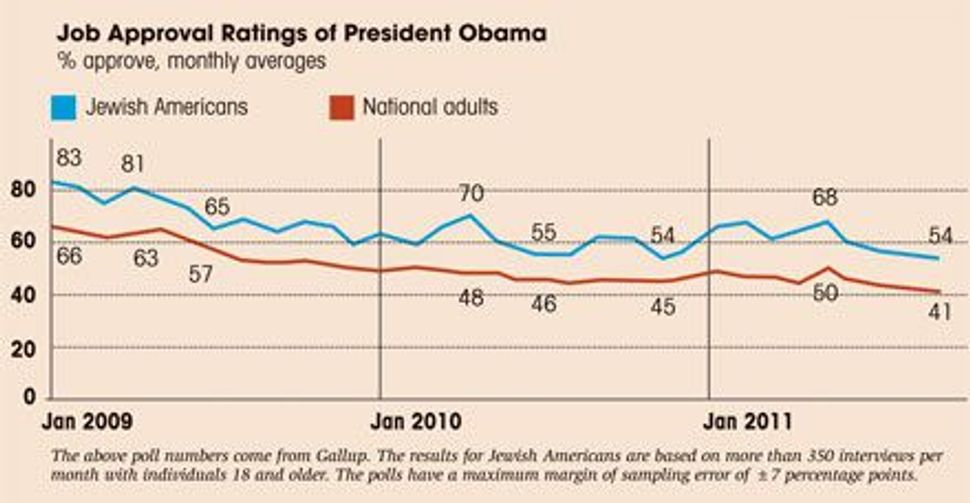 As the 2012 election approaches and Republican presidential candidates continue to attack President Obama on his Middle East policies, we can expect to hear increasing chatter and anecdotes about a “Jewish problem for Obama and Democrats.” These claims may capture headlines, but they ignore the data that demonstrate how Obama’s only problem with Jewish voters is that there are not more of them.

Michael Bloomfield and Mark Mellman say predicting the Jewish vote is getting more complicated. Amy Cohen and Anna Greenberg write that Obama’s effort to hold onto Jewish support is part of a larger task of keeping his coalition intact.

National surveys conducted by Gallup International show that American Jews have approved of Obama’s job performance throughout his presidency by an average of 14 percentage points more than the rest of the American electorate. This gap undercuts a frequently made, but factually erroneous, claim that Obama has a policy toward Israel that alienates Jewish voters, leading Gallup to conclude that its results “call into question attempts to link a decline in Obama’s approval among Jews to his statements or policies on [Israel] matters important to Jewish policymakers and lobbyists.” 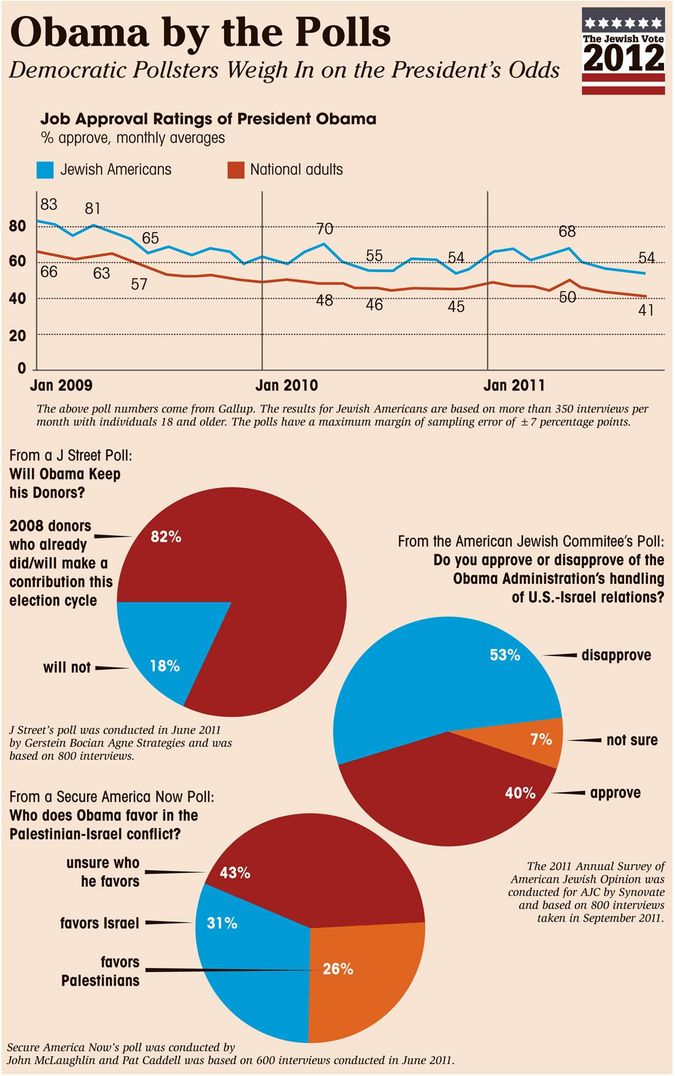 To put Obama’s Jewish support in proper perspective, consider that Gallup’s latest release of Jewish data, in mid-September, revealed a 54% job approval — slightly higher than the 48% approval among Hispanic voters, who, like Jews, constitute a base Democratic constituency (but unlike Jews, constitute nearly 10% of the electorate and can make a serious difference in swing states).

When looking at the 2012 election, the president’s job approval is only one piece of the puzzle. In fact, a president’s job approval always measures lower than his eventual share of the vote. In the case of Jewish voters and a Democratic president, this phenomenon is even more dramatic, because a core dynamic that drives the Jewish vote is the intense opposition that Jews express toward political conservatives and toward the Republican Party. Whether it is Glenn Beck and the Tea Party movement or George W. Bush and Mitt Romney, surveys that my polling firm has conducted show that Jews fundamentally distrust the individuals and institutions that define the various wings of the Republican Party.

While the antipathy toward Republicans is one central component of the Jewish vote, another key factor is the very positive feelings that Jews express toward Obama and Democratic policies. The president’s signature accomplishments of his first term — ending the war in Iraq, the Osama bin Laden operation and health care reform — directly address three issues that Jewish voters identified as determinants of their vote in 2008.

Of course, the single most important issue for Jews in 2008 and today is the economy. The problems in the economy should have some impact on Obama’s support among American Jews, but this is likely to be mitigated by the progressive ideological leanings of American Jews whose perspective is more Warren Buffett than Herman Cain.

Our latest poll of American Jews simulated an election between Obama and Romney, and perhaps presents the clearest picture of where the Jewish vote may be headed. The initial vote shows Obama leading 63–24. When we allocated the undecided voters by party identification — a common practice among political pollsters when trying to map out the outcome of a race — the vote was 70–27, and far better than the dead heat reported in a recent ABC News/Washington Post poll among American adults. Clearly, Obama has a lot of challenges on the road to re-election, but getting the Jewish vote is not one of them.