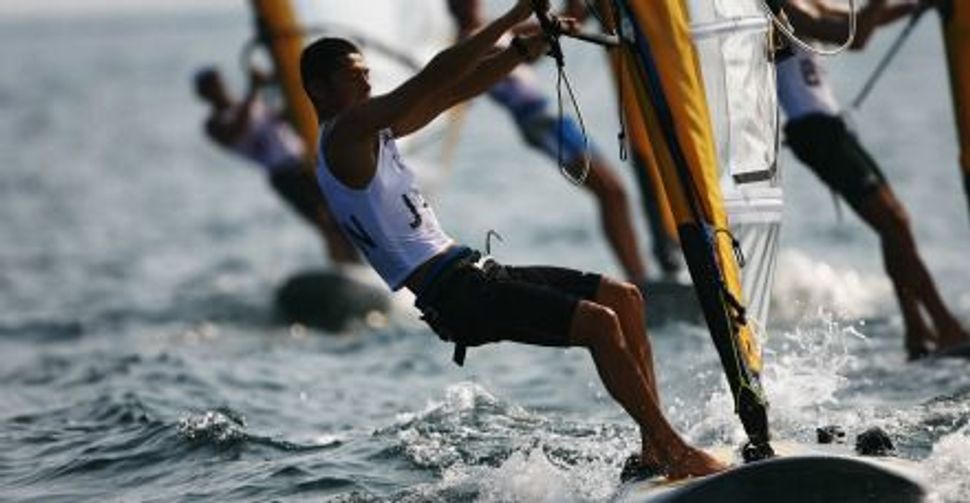 Israelis and their Summer Olympics athletes are eyeing the upcoming London Games with excitement and sadness.

The athletes are hoping that for the sixth straight summer Games, at least one of them will come home with a medal. Yet they are well aware that the International Olympics Committee has again spurned the campaign to have a moment of silence for their counterparts slain 40 years ago at the Munich Games.

The London Games, which begin July 27, will have 38 Israeli Olympians participating in 18 events. Their top medal hopefuls are in judo, sailing and gymnastics. This year’s delegation features two bronze medalists – windsurfer Shahar Tzuberi, from Beijing in 2008, and judoka Ariel Ze’evi, from Athens in 2004.

“I’m very calm, but there’s still time” before the Olympics, said Ze’evi, who at 35 is the team’s oldest member. “We don’t prepare for failure.”

The Israeli squad, which is scheduled to arrive at the Olympics complex on July 10, also is preparing for some somber moments in London. Team members will be participating in a public memorial ceremony on Aug. 6 for the 11 Israelis killed at the 1972 Munich Olympics.

The IOC has resisted calls for a minute of silence for the victims despite an online petition with nearly 90,000 signatures and the urging of the U.S. Senate, as well as Australian, Canadian, British and German lawmakers.

Israeli delegation head Efraim Zinger said the IOC is “obligated” to remember the Munich 11 as “athletes and Olympians.”

Other than the day after the murders, the IOC has never held a formal moment of silence for the slain Israelis. IOC officials have participated in Jewish community events surrounding various Olympic Games since the tragedy.

The London Games also mark the 60th year since Israel’s first Olympic appearance, in Helsinki, Finland. It took another 40 years for an Israeli to win a medal, but since 1992 the delegation has taken home at least one medal, including three each in judo and windsurfing, and one in kayaking.

This year, the team hopes to add a fourth sport to the list. Zinger also would like to see an Israeli woman stand on the podium for the first time since the country’s first-ever medal in ‘92, when judoka Yael Arad took the silver. Nearly half of this year’s delegation is female.

“Because of the work we did in the past few years, all of our athletes are better,” Zinger said, noting particularly the gymnastics team as a potential medal winner. He said he was hopeful for at least one more medal in judo or sailing.

Another hope for Israel’s first female medalist in 20 years comes in what may be Israel’s best Olympic sport – judo. Alice Schlesinger, 24, did not medal in Beijing but has since won three bronzes – in the 2009 world championships, and in the 2009 and 2012 European championships.

Schlesinger says she hopes to “go home in peace” from London. “Like everyone else I want a medal, but I want to enjoy it,” she said.

Typically, the Israeli team has a strong international flavor. Several of the athletes were born in the Soviet Union, and two were born and raised in the United States – pole vaulter Jillian Schwartz and 400-meter sprinter Donald Sanford. Schwartz connected with Israel after competing here in 2009, while Sanford, who is not Jewish, married an Israeli and lives part of the year on her family’s kibbutz. Both are now Israeli citizens.

For his part, Sanford seems to have settled in well with his new Israeli family.

“Her ima, her abba and her savta live 400 meters from where we live,” said Sanford, using the Hebrew words for his wife’s mother, father and grandmother. “We see them every day.”