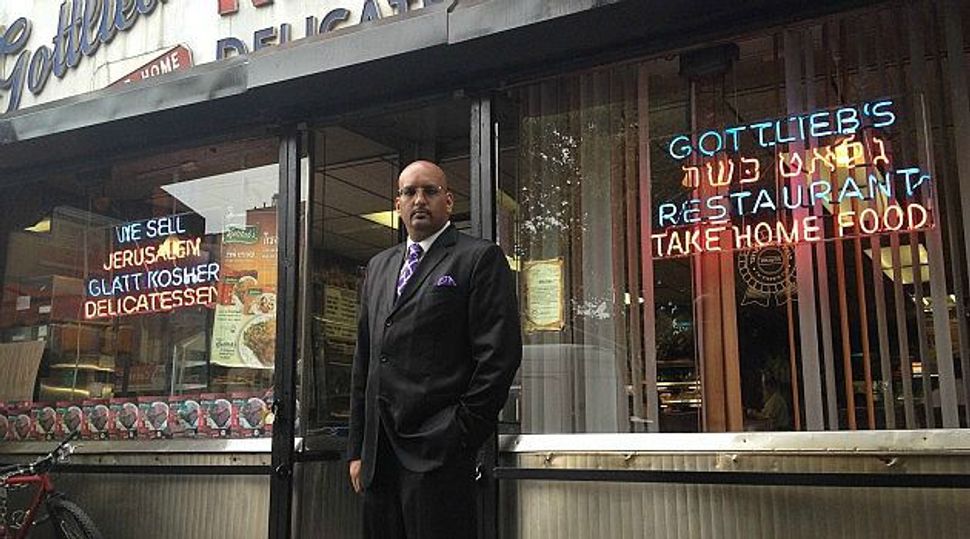 George, 33, has no heavy-hitting political backers, no name recognition and, so far, very little campaign money. He is the son of Indian immigrants in a city where no South Asian has ever won citywide or boroughwide office.

Yet Hynes’s 22-year reign as district attorney appears more vulnerable than it has in years. The veteran DA, who faces the voters in 2013, has taken a series of high-profile hits, mostly involving the ultra-Orthodox community.

The most serious blow came in May, when Hynes was bombarded with criticism over his special handling of ultra-Orthodox sex abuse cases, particularly his refusal to release the names of those accused or even convicted of abuse.

“How do you know what he’s done if he’s not being forthright with the names?” said George, who has spent eight years as a prosecutor in Manhattan. “I think we can stem the [ultra-Orthodox sex abuse] problem very easily by just disclosing the names. The victims will have the courage to come forward, and it sends a message to pedophiles [that] this type of behavior won’t be tolerated.”

George was sitting in Gottlieb’s, a kosher restaurant in Williamsburg, eating french fries out of a cardboard box. With his dark, South Indian complexion, tidy goatee and purple silk tie, he struck an incongruous figure among the white shirts and straggly beards of ultra-Orthodox men, most of them from the Satmar branch of Hasidism.

As George continued his critique of Hynes, two Hasidic men approached the table.

“We recognized your face,” George said they told him, “and we wanted to wish you good luck.”

Williamsburg is at the center of the latest sex abuse scandal to rock the ultra-Orthodox community. In May, more than 1,000 men gathered for a fundraiser for Nechemya Weberman, an unlicensed therapist accused of abusing a young female patient over several years. The event highlighted critics’ claims that the ultra-Orthodox community rallies around alleged perpetrators while shunning victims.

The following month, Hynes ordered the arrests of four ultra-Orthodox men on charges that they tried to coerce the victim to recant. The most serious charges were leveled against Abraham Rubin, a businessman accused of offering the victim and her boyfriend $500,000 to withdraw her accusation and flee to Israel.

Hynes has long been accused of going soft on Brooklyn’s various ultra-Orthodox communities to secure the support of their bloc-voting constituents.

“In New York, electoral politics is a retail business and candidates have to garner one vote at a time,” said David Pollock, associate executive director of the Jewish Community Relations Council of New York. “The Orthodox community is one of the few places where candidates can attract votes wholesale because people can rely on endorsement by key leaders [that] can really influence votes.”

But Hynes’s apparent crackdown on ultra-Orthodox abusers, along with tough talk in which he accused the community of being worse than organized crime in its intimidation of victims, has alienated some sections of the community.

A political operative in Williamsburg, who did not wish to be named because it could damage his career, said the arrests, particularly of Rubin, an “admired leader,” severely damaged Hynes’s popularity among Williamsburg Jews. “It certainly seemed as if he was playing politics with the indictment and trying to cover a flank,” the operative said, “that he had not been hard enough on the Hasidim.”

Whether George’s even tougher stance — to name those accused or convicted of abuse — will push ultra-Orthodox voters back into Hynes’s camp remains to be seen. George thinks not. “This is not an Orthodox issue,” he said, “this is a crime issue.”

George grew up on a predominantly Italian-American block in the Sheepshead Bay section of Brooklyn. Neighborhood kids used to call him “Gandhi” because of his Indian heritage.

After public school, college at New York University and a law degree from Hofstra, George got a job working in the Manhattan DA’s office. He has spent the majority of eight years working in the special narcotics unit, and is unknown to most Brooklyn voters.

By contrast, Hynes has been in office for more than two decades. He won election soon after his headline-grabbing role as special prosecutor in the racial attack of the Howard Beach section of Queens, in which four white youths were convicted of chasing a black man to his death on the Belt Parkway.

Even with name recognition, George, who is running as a Democrat, would have a steep hill to climb. The post of district attorney in New York City is often seen as a job for life. Hynes has held his position since 1989, one year less than Bronx DA Robert Johnson. Robert Morgenthau resigned as Manhattan DA in 2009, after 34 years in office.

Hynes won his post after his predecessor, Elizabeth Holtzman, resigned. His position has not always seemed impenetrable. In 2005, several candidates challenged him for the Democratic primary. Hynes edged out his closest challenger, John Sampson, getting 42% of the vote to Sampson’s 37%. During the last election, in 2009, Hynes ran unopposed.

In an email, George appeared unfazed by the battle ahead. “I have received some significant pledges from people within the Orthodox community, other parts of Brooklyn and of course the Indian community that I think it will be significant,” he said. “I am a career prosecutor, not a career politician.”

During the past five years, 87% of indictments in Brooklyn have resulted in convictions or guilty pleas, according to the New York State Division of Criminal Justice Services. That’s the same as the Bronx DA’s office and only a few points off the Queens DA’s office, which had the most successes with a 92% strike rate during the same period.

Nevertheless, Hynes’s recent failures have attracted a lot of publicity.

In April, Darrell Dula, a 25-year-old black man, was released after a year in jail, following revelations that a Hasidic woman recanted her original claim that she was raped and pimped out by Dula and three friends. The woman’s statement was never passed to the men’s defense attorneys.

One week later, Hynes’s much heralded 2010 conviction of ultra-Orthodox travel agent Baruch Lebovits on sex abuse charges was reversed by an appeals court because of prosecutorial misconduct during the trial.

And then there’s Hynes’s refusal to name those accused or convicted of abusing ultra-Orthodox children.

Such cases make up one-tenth of 1% of some 27,000 arrests that Hynes’s office deals with each year. Yet George says it is the only topic journalists want to talk about.

George is happy to discuss the sex abuse scandal. But he really wants to make violent crime the focus of his campaign.

Although crime has fallen sharply since Hynes took office, recent statistics reveal that almost 40% of murders in New York are committed in Brooklyn. The majority of those murders are concentrated in low-income, largely black communities.

Referring to some of the borough’s toughest neighborhoods, George said, “People in East New York, Brownsville, and [Bedford-Stuyvesant] send their kids to school and don’t know if they will come back.”