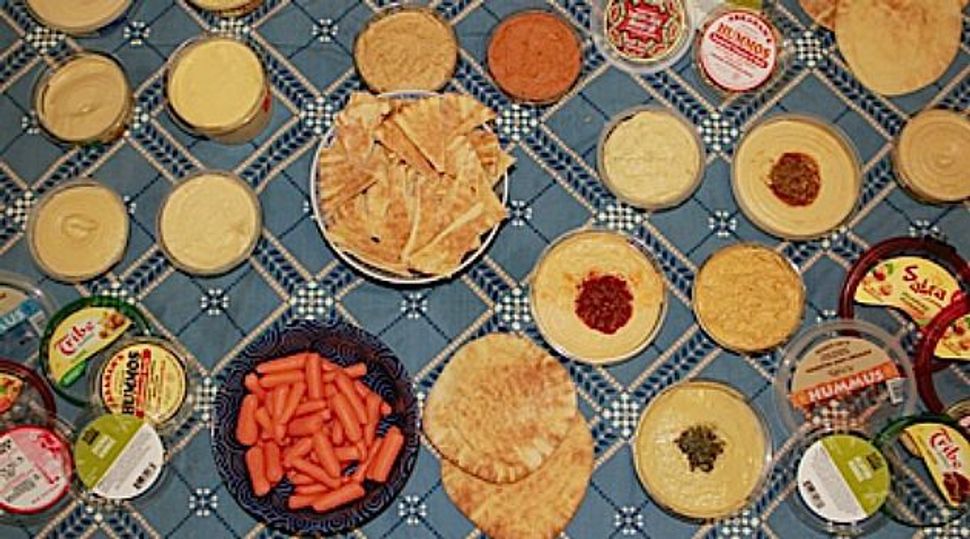 Hummus-palooza: The chick pea spread used to be exiled in the foreign food aisle. No more. Image by hannah rubin

‘In the 1980s, when I would mention that I sold hummus, people thought it was something for gardening, something to help with the roses,” said Abraham’s Natural Foods founder and owner, Louis Fellman “Nobody knew what it was.”

Cut to 2008, when Adam Sandler brought his slapstick love of hummus to the film “You Don’t Mess With the Zohan.” Laughing at the Israeli hairstylist who used hummus to put out a fire and to brush his teeth, Americans were falling in love with the chickpea dip.

To judge by the proliferation of availability and flavors, the hummus-ization of the United States is largely complete. What started out as a niche Mediterranean dish has morphed over the past two decades into mainstream American fare.

According to Fellman, ShopRite, a popular supermarket in the northeast, didn’t even know what hummus was in 1985. Its 240 store locations now carry as many as 12 different brands, says the company’s website.

And the latest trend for this now ubiquitous chickpea dish is a variety of colors and tastes. No longer are chickpeas, sesame seeds, olive oil and lemon the only ingredients whirled together to make the timeless dish.

Welcome to the world of flavored hummus, where ingredients like horseradish, edamame and guacamole rule the supermarket shelves, alongside exotic seasonings like chipotle and buffalo sauce.

Sabra boasts of 19 different flavors, with more on the way. Tribe follows with a close 16. Trader Joe’s, which sells an extensive line of TJ’s brand hummus, offers three different versions of the original flavor, plus a hummus ground with edamame, and a special three-layer hummus dip with cilantro jalapeño hummus and spicy hummus layered over the original.

According to Fellman, who has been making and selling hummus since 1985, the question he used to ask, “Do you like hummus?” has morphed into, “Which hummus do you like?”

Though many hummus aficionados have regular local suppliers and generally ignore the mass-produced Israeli-style hummus on supermarket shelves, its proliferation is undeniable. Even a recent innocent trip to the corner deli left this writer dumbfounded by the breadth of options — including various renditions of classic hummus from across the Middle East. Yorgo’s makes a creamy Lebanese version, Sabra makes it Israeli-style with a nutty-flavor and Athenos makes a tangy Greek-styled hummus.

From this plethora of options, and the puzzle of which hummus to buy, The Great Hummus Taste Test was born. The Forward gathered together a diverse panel of tasters from the staff of the Forward and Hazon, who tasted their way through 32 different varieties of Israeli-style hummus. We spread out the testing over a week, and tasted for specific categories on different days, in order to give ourselves (and our palates) enough time to process all the zesty and intriguing flavors.

The categories we tested for were best-packaged original, best spicy, best sundried tomato and best New York freshly made. And then, in the name of research and as a nod to the inventive flavors available, we tried 12 of the most unusual flavors we could find to see if they were worth taking home.

Arguments broke out among our tasters over whether sundried tomato belonged alongside chickpeas and sesame seeds. An Israeli staffer almost broke down, shouting that the flavors were an abomination. Noses twitched as all the fresh hummus was unwrapped; mouths watered as the pita was sliced.

After a week of noshing (and a couple of stomach aches), we present you with the five best (and one worst!) varietiesof Israeli-style hummus currently on the market.