Hummus Colonization: Now at Your Supermarket! 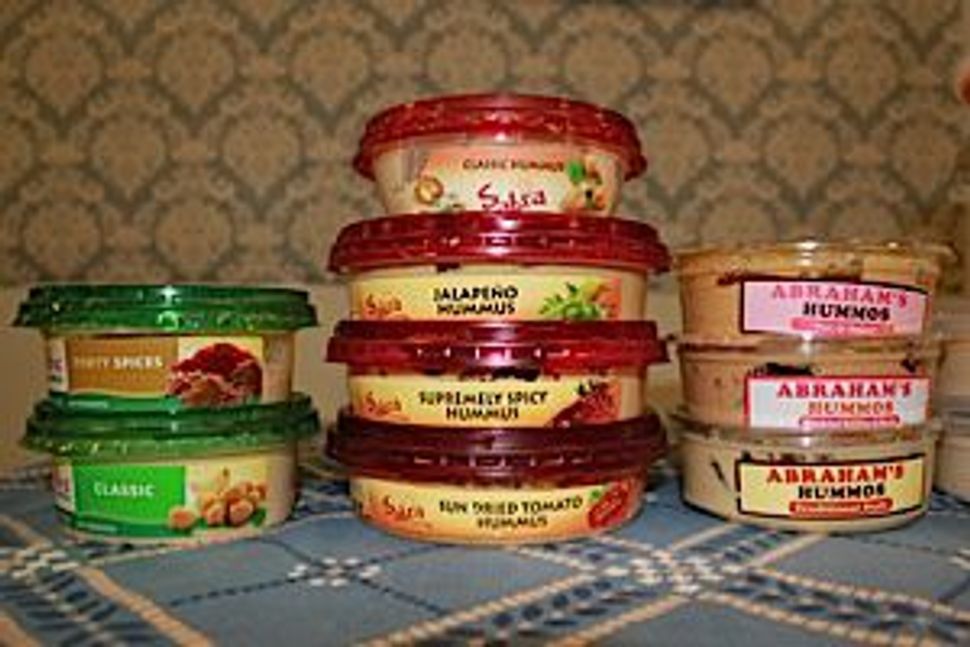 And so, Hummus Week at the Forward comes to a close. One week, fifteen tasters, and thirty-two different hummuses.

On our score sheet for our Wacky Flavor Day, we included what might have seemed like a straightforward question: “does it taste like hummus?” However, many testers understandably asked for clarification about the terms defining just exactly what hummus is. Just tasting all the various Israeli-style hummuses made in New York restaurant kitchens proved to me how diverse the flavors of chickpeas, sesame seeds, lemon, olive oil and garlic can be. Of course, this is all not to mention regional and national differences in hummus — for this project, we focused strictly on Israeli-style hummus.

Syria to Lebanon, Greece to Egypt — each Middle Eastern country not only uses their own individual hummus recipe, but also claims absolute ownership over the chickpea treat. In fact, the Lebanese Industrialists Association has consistently petitioned the Lebanese Ministry of Economy and Trade to request protected status from the European Commission over hummus, and to declare it a uniquely Lebanese food, a trademark comparable to Italian “parmigiano reggiano” or French champagne.

We may never know the precise origins of hummus or the identity of its primordial progenitor. However, we do know that this spread is in many corners of the earth and in a variety of blends, each with subtle yet important differences. Sometimes it is rich with garlic that tickles your tongue and throat with each dab. Other times the chickpeas are not fully blended, and each lick results in chickpea skins mulling around your mouth with delectable and melting chewiness.

Yet, despite this exciting and desirable diversity in hummus, the various flavors sitting on our American grocery store shelves don’t feel like the latest moment in a history of personalized foods. And that hunch was validated last week, as I tasted an entire table full of “wacky” flavored hummuses that all tasted, well, pretty bad. I love the idea of putting olives in hummus, or seasoning something with an extra kick. But none of the store-bought varieties that we tried lived up their creative namesakes. Or tasted like much of anything. Just what exactly is “buffalo-style” hummus trying to do anyways?

Sabra, a company that is jointly owned by PepsiCo and Strauss foods (An Israeli food magnate that has been under fire recently for its controversial involvement in Israel’s occupied territories), prides itself on its Mediterranean flavors, worldly chefs, and adventurous palate. “Adventure awaits,” its website teases. But, exactly what adventure is that?

Cultural commodification is practically America Inc.’s middle name — but at what point does it become problematic for items to be brought overseas, warped to fit the “tastes” of the American consumer, and then branded as “exotic” and “authentic”?

This latest flavored trend feels like one aspect of a larger marketing move that has hit almost every national retail brand around. Have you noticed, as you stroll through the salsa aisle, how many different flavors and spice-levels stare up at you? Newman’s Own offers everything from sweet fruity flavors of peach, mango, and pineapple, to their four different nuanced spice levels (coming in, with various other flavors, at a total of eleven different salsa varieties). Wholly Guacamole serves up both classic and organic guacamole if you like it plain, or spicy and pico de gallo if you like it with a kick. And, if you’d rather it be portioned for you, they have additional packaging for the 100-calorie pack varieties. That means that their brand gets six horizontal slots across the front of the guacamole display case, even though they are really only peddling two distinct flavors.

The new supermarket war is one of shelf space — the amount of display time that a brand receives is in direct proportion to how many varieties they offer.

Speaking with Abraham’s Natural Foods founder and owner, Louis Fellman, on the phone last week confirmed my suspicions. Fellman, who has been making and selling hummus since 1985 explains that the multiple flavors that he sells are more about business than taste. “The hummus market is tight. You have to do everything you can to stay afloat. If you didn’t have 10 flavors, then no one would see your product on the shelf,” Fellman says. Though his traditional flavor outsells all other varieties by a four to one ratio, Fellman claims he would be out of business if he produced only the traditional. And so he makes eight.

The various varieties of products available to us enforce the idea that we, as consumers, have unlimited choice in the food that we select. Eleven different salsas, five guacamoles, 19 hummuses — and I am free to choose whichever that I want! The entire world, served up to me by own local grocery store.

The reality is that most items that we stroll by have been selected for us by the same few food providers. And, though we are looking at 11 different varieties of salsa, they are all made by the same company. And that marinara sauce sitting next to it? Probably the same company too. The ability to choose the salsa we want effaces the reality that we aren’t really given much of a choice when it comes to choosing food.

Hummus Colonization: Now at Your Supermarket!