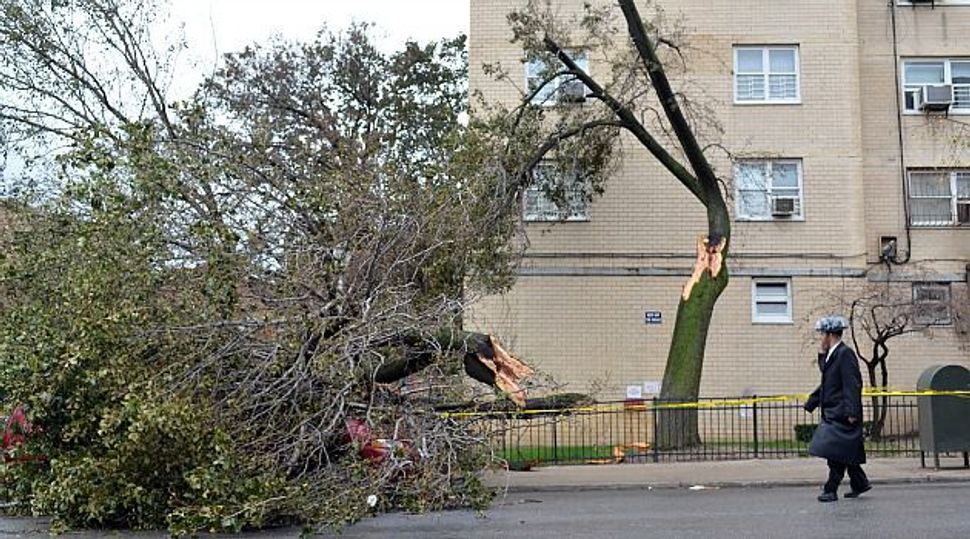 The heavily Hasidic Jewish neighborhood of Brooklyn escaped major damage from Sandy, suffering only minor flooding and downed trees from the superstorm that caused devastation elsewhere.

Ultra-Orthodox schools opened as usual Tuesday and a few cafes and shops had their doors open as the neighborhood struggled to return to normalcy after the massive storm hit the day before.

“God is watching us, that’s it,” said a man behind the counter at a cafe on Bedford Ave., who gave his last name as Klein. “(There’s) nothing major.”

Some store awnings were torn up by the winds hours earlier and trees blocked some sidestreets. But power appeared to be mostly on in the neighborhood and there was no signs of severe damage.

M. Sims said he drove from Williamsburg to Boro Park for a Breslov Hasidic wedding at the height of the storm Monday evening. The nuptuals went on as planned and he drove back without incident through the near-empty streets.

“It was awesome,” he remarked.

Williamsburg is a low-lying area just a few blocks from the East River. Some parts of it are in the city’s Zone A, where officials ordered mandatory evacuations.

Still, the storm surge appeared to be nothing like as serious as the 14-foot wall of water that inundated lower Manhattan and Brooklyn’s Red Hook, both of which border directly onto New York Harbor.

At the height of the storm, the street in front of a Satmar Hasidic synagogue on Kent Ave. was seriously flooded, neighbor Joel Glick said. But the water did not get into the shul he said.

The car-less streets also struck Moshe Klein as the most obvious outward sign that a major catastrophe had taken place. He praised the Shomrim security for dealing with many downed trees in Boro Park. Thee were precious few vehicles on the road from Boro Park to Williamsburg Tuesday morning.