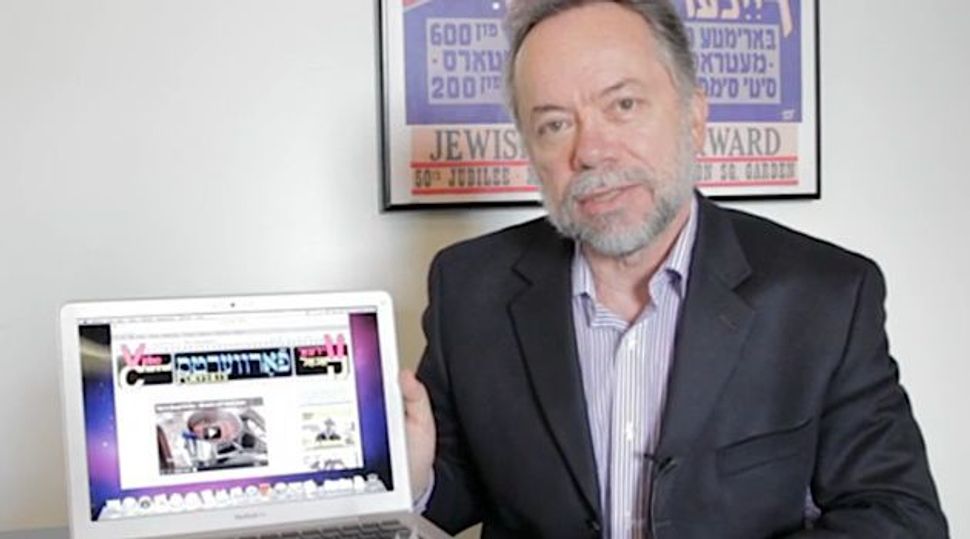 The weekly Yiddish Forward is cutting back to a biweekly print schedule amid declining circulation and growing financial pressure.

The Yiddish Forward will increase its focus on its website, which will be updated daily with news and multimedia content starting February 4.

Now the last of the Yiddish-language secular newspapers, the Yiddish Forward has published continuously since 1897. Forward officials say they hope the move online will allow the paper to reach a wider audience.

“Much of the print audience is an elderly readership that we feel obliged to keep serving,” said Samuel Norich, president of the Forward Association, which owns the Yiddish news outlet as well as the separately produced and independently staffed English-language Forward. “The growth, we expect, will be on the digital side,” said Norich, who is also publisher of both news organizations.

Known as the Forverts, the Yiddish-language newspaper was once a dominant New York City daily, read widely on Manhattan’s Lower East Side and around the country. In the 1920s, the paper had a daily circulation of 250,000 copies and a nationwide readership of more than a million.

That changed as the Yiddish-speaking secular Jewish community gradually assimilated. Today the Forward Association says the Forverts has a print circulation of 2,100 copies and 6,000 readers. The Forward Association’s Yiddish editorial division lost more than $1 million in 2011 alone, according to a publicly filed financial report.

“It was evident that our Yiddish readership in print was declining,” Norich said. “Some people felt that we were spending too much for what was, in fact, a shrinking readership.”

The Forverts will switch to its new biweekly printing schedule on February 4. The paper’s website, which now updates weekly, will post new content daily. In the transition, the Forward Association’s Yiddish editorial operation will shift from eight full time staff positions to seven, according to Norich. There will be no changes to the staff or publication schedule of the English-language Forward, whose daily website attracts a million page views a month.

“It’s a return to a daily newspaper,” said Boris Sandler, editor of the Forverts, speaking in Yiddish through a translator. “We’re also opening a path to younger readers, and we will adapt to their tastes and interests.”

Part of the planned appeal to younger readers will consist of an effort to market the paper to Hasidic Yiddish speakers. Yiddish-speaking Hasidic communities are growing rapidly, but Hasidic Jews read their own ultra-Orthodox Yiddish newspapers. The Forverts, which has secular and socialist roots and a Zionist orientation, has traditionally been shunned in Hasidic communities.

“There have always been outliers within the Haredi world who have recognized the distinction of the Forverts and have read it, sometimes underneath their Haredi newspaper so that nobody should see,” Norich said.

Among other things, the new Forverts website will include a blog written pseudonymously by Hasidic writers in Hasidic Yiddish, which is slightly different from the standard Yiddish employed by Forverts writers.

“These two sides were always separate, antagonistic — and the Forward helped to antagonize,” Sandler said. This new effort to bring Hasidic readers to the Forverts website could begin to change that, he said. “I welcome the brave Hasidic writers who have entered into the treyf kitchen,” he said, using the Yiddish word for “nonkosher.”

Except for its shift to biweekly status, the print edition of the Yiddish paper, meanwhile, will remain largely the same. The 16-page print product includes original Yiddish-language news, columns on Yiddish culture and ideas, and some articles translated from the English Forward and the JTA. There’s also a Yiddish-language word search puzzle.

The Forward Association has undertaken the cuts to the print edition after years of consideration.

“We were intentionally slow in making changes,” Norich said. “But we see an opportunity to grow the audience on the digital side, and we finally decided to focus our resources there.”

The Forverts was profitable until the 1940s, amassing large real estate holdings and a New York City radio station. The Forward Association has subsisted for decades off the sale of those assets. With the sale of the radio station in 2003, however, the association ran out of things to sell, and its leadership began to seek a new business model.

“We were spending too much of our investment income in order to maintain the principal intact,” Norich said. “We knew then that we would have to find other sources of earned and donated income in order to keep publishing the Forward newspapers.”

The association ceased publishing its Russian-language newspaper in 2004 and applied for 501(c)(3) status, which allowed it to begin accepting tax-exempt donations in 2010.

“Change is really hard, particularly for a Yiddish publication,” said Adam Whiteman, a former member of the Forward Association board who served as the organization’s treasurer. “There aren’t too many of them around.”

Norich said that ceasing print publication of the Yiddish paper was never seriously contemplated. But the Forward Association board did consider cutting printing to once a month before deciding on the less drastic shift to a biweekly schedule.

The print edition’s readers are largely elderly, Norich said. More than half of them came to the United States in the immediate aftermath of the Holocaust.

Some board members argued strongly for maintaining the paper as a service to these older readers. “It’s been a heated topic of discussion,” Whiteman said. “On the one hand there’s the economy. On the other, there’s the emotional issue of a readership who is going to miss it every week if they don’t have access to some form of Internet.”