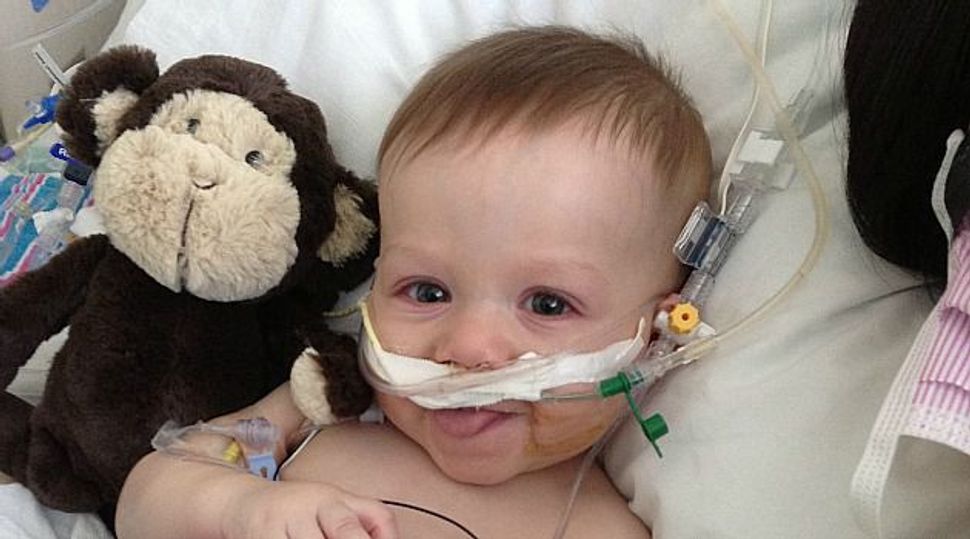 Battle for Life: Little Idan Zablocki suffers from an immune-deficiency disorder that affects 1 in 500,000 people. It can be a death sentence but his family is fighting back with the help of the community. Image by courtesy of Zablocki family

Any Jewish mother thinks her baby boy is special. But Amanda Zablocki’s son is one in a million — and in one of the most heart-wrenching ways imaginable.

Idan Zablocki is 1 year old. Three months ago he was diagnosed with a genetic disorder called Hyper IgM syndrome, a rare immune deficiency that actually affects two out of every 1 million people.

“It’s similar to what you know as the ‘Bubble Boy syndrome,’” explained the boy’s father, 33-year-old Akiva Zablocki. “Hyper IgM is like one level down from that. “ Idan cannot drink tap water. Bath time means pouring out bottled water into the tub. Guests must take off their shoes, wash their hands, and sometimes even wear masks and a clean change of clothes.

Though his parents can still touch him and hug him, they also must take precautions. His father, who has the sniffles, has been wearing a mask for the past week in order “not to risk anything.”

“We’re kind of living in our own bubble to make sure we’re not taking anything from the outside and bringing it to him,” said Amanda Zablocki, 28. “Sometimes I hear someone sneeze on the train and I actually change train cars.”

Idan was born healthy, but roughly eight and a half months later he started breathing abnormally quickly as he was recovering from a cold. A couple of weeks later it happened again. In the end his respiration rate got so high that his parents rushed him to the hospital.

“He was diagnosed with a very rare form of pneumonia, caused by a fungus that’s extremely common,” his mother explained. ”It’s almost like getting sick from dust. People who get sick from that are people who have very compromised immune systems.”

Because he has almost no ability to produce antibodies, Idan cannot come into contact with germs. He has an extended family and cousins his own age in Israel and the United States, but he has never met them, as an ordinary cold could be a death sentence.

The Zablockis are no strangers to medical hardship. Eight years ago, Akiva Zablocki was diagnosed with a brain stem tumor that doctors deemed inoperable. Refusing to give up hope, he looked for a doctor who would operate.

A brain surgeon in Arizona proved to be the answer and saved his life, removing the tumor entirely. Though he sometimes has to wear an eye patch, he has regained his quality of life.

His son’s condition “makes my brain surgery look like a paper cut.,” Akiva Zablocki said .”But [he] is strong, and I think he’ll overcome it.”

People with Hyper IgM have three options: They can do nothing, which condemns them to death in their mid-20s from cancers and opportunistic infections; they can use intravenous immunoglobulin, the blood plasma replacement therapy that Idan currently undergoes once a week, or they can have a bone marrow transplant.

After consulting with doctors and medical professionals in England, Canada, Israel and all over the United States, the Zablockis have finally made their decision: They are making Seattle their temporary home as Idan undergoes treatment at Seattle Children’s Hospital, where both bone marrow transplants and Hyper IgM were discovered. He is lucky: Four potential donors have already been identified.

The Zablockis chose Seattle because doctors there use a drug called Treosulfan as part of the chemotherapy that will wipe out their son’s original immune system. Though still not FDA approved for general use, it is being used in clinical trials. The drug is believed to reduce the three fatal complications of bone marrow transplants: complications from chemotherapy, infections and graft-versus-host disease.

“We want to choose the [option] that gives him the best chance of long-term survival with the least complications,” his mother explained. “With a bone marrow transplant, there’s a chance for a complete cure. It takes one to two years to fully recover, but if it’s successful, then he’s a perfectly normal child and he grows just as any other person does.”

But all this comes at a cost. The hospital estimates the medical bill will be between $600,000 and $1,000,000. Akiva Zablocki, who takes care of Idan full time, doesn’t work. His wife is a lawyer, but she will have to take six months of unpaid leave in order to be with her son.

To alleviate some of the costs not covered by their insurance, the Zablockis have launched an online fundraising campaign, and what started as a couple of Facebook posts and emails to friends has turned into a strong network of support: They have raised $124,507 toward their $250,000 goal, with 117 days left to go.

“The response has been amazing,” Akiva Zablocki, said. “Overall, we don’t know the majority of the people donating to the campaign. We sent it to a few friends on Facebook and email, and a lot of people have been sharing it, sending out emails to their congregations. It was very scary for us; we didn’t know how we were going to deal with this.”

“People are praying for Idan,” his wife added. “People we’ve never met. It’s been a very powerful experience.” The Zablockis acknowledged the efforts by Jewish communities in New York and abroad, saying they have been an incredible asset.

“One of the things that has been extremely touching for us has been the large volume of emails from the Jewish community offering to bring us meals, to help, to baby-sit,” Amanda Zablocki said.

“Just the overwhelming response of ‘We’re with you,’ ‘We’re there,’ ‘What do you need?’ We’re trying to draw strength from where we can, and we’re definitely drawing strength from the Jewish community, from New York and all over the world.”

As for little Idan? Well, his name says it all. “Idan means ‘era’ [in Hebrew], like ‘time,’” his mother said. “It’s from the Bible. We were opening up a new era with Idan. For me, the association between era and time, time being so precious and yet so powerful, there’s something very meaningful in that. Idan is very strong, but he’s very precious.”