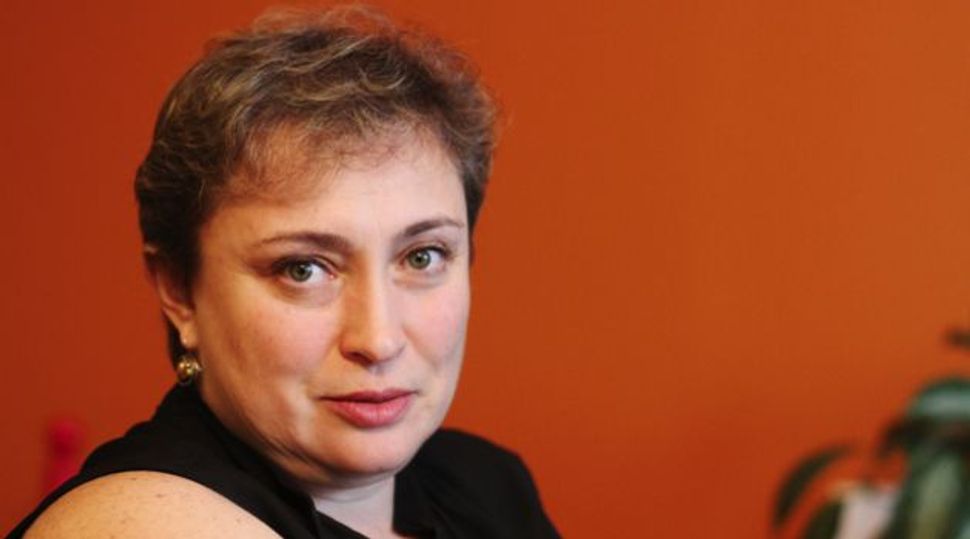 A Ukrainian immigrant who arrived stateside in 1990 with her husband, children and mother, Yelena Goltsman was deeply closeted when she joined Manhattan’s gay and lesbian synagogue, Congregation Beit Simchat Torah in 1995.

Today, the media executive leads RUSA LGBT, a New York-based support group for Russian-speaking gay, lesbian, bisexual and transgender people. She has also become one of the most prominent voices calling for a boycott of the 2014 Winter Olympics to protest Russia’s new anti-gay laws, such as the regulation against “homosexual propaganda” among minors.

Goltsman now lives in Brooklyn with her wife; the two married in a Jewish ceremony in 2011. “My adult children are married now, and they and their spouses are very supportive of our marriage and of LGBT causes in general,” she said. The Forward’s Michael Kaminer spoke to Goltsman about the situation in Russia from her office.

Yelena Goltsman: We are in absolute agreement with Stephen. It’s impossible not to make a comparison. Everything is slipping back into a familiar Soviet Union mentality with punishing laws. And you know it happens one little step at a time. Then you see a whole group of citizens who do not have the same rights as other groups of citizens. We know what happened in Germany; we do not want that to happen in Russia. There’s a major difference: In Germany, the world decided to stay aside, watch it happen and appease a dictator. What we see now is that the whole world is up in arms. Not enough so, but it’s a start. People are talking, people are protesting. There’s an outcry for human rights for all people in Russia. I see it as a major difference.

Partnering with the LGBT activist group Queer Nation, your organization held a “vodka dump” and continues to urge a boycott of Russian products. Will a boycott change the laws?

A lot of gestures happening now are somewhat symbolic, like the vodka dump. The dump by itself cannot make a dent in people’s opinions, in Putin’s opinions, in the law. But it shows our outrage around laws like this, in the 21st century, in the civilized world, in a country just like ours in many ways.

The more we keep up the pressure, the more people here can make better decisions about how they want to go about being tourists in Russia. We get a lot of requests asking if it’s safe to go. Why would you even consider going, and giving your money to a government that infringes on the civil rights of its citizens?

What are the chances the Winter Olympics will get moved to Vancouver, British Columbia, as your group has demanded?

I believe it can happen with enough will behind it. If there was, God forbid, a natural disaster near Sochi, the International Olympic Committee would find a way to relocate the games. Right now, we see a human disaster unfolding before our eyes. If there’s enough will, we can have it in Vancouver, where everyone would be safe. At the same time, I don’t see this will coming from the IOC. There’s not enough pressure from any level of government pushing them to do the right thing, take the high ground, make a point. But even if it’s not possible, it’s important for us to keep up the pressure, and keep our eye on the ball, because of what happened in Germany. We just can’t allow that to happen now.

The founder of Occupy Pedophilia, a Russian anti-gay group, told the Financial Times that “we are Nazis. Everyone knows we are Nazis.” Why do you think there hasn’t been more outrage in Russia about them?

Given the chance, do you think most Russian LGBT people would just leave Russia, or do you think they’d be happy if they stayed in the country with the laws repealed?

It’s not that easy. Number one, you have to have proper documentation to emigrate seeking asylum. And think about what it’s like to have to approach your family and leave the country you love and want to live in. If I still lived there? I’d pick up and go. Do people want to leave their country? No. But right now, it’s just dangerous. The next law to take effect will take adoptive and even natural-born children from LGBT families. It’s a very quick slide down. My children could be taken away from me because I’m gay? I’d want to leave to make sure I’m safe and my kids are safe.

When you got the idea for RUSA LGBT, you weren’t even out. How did that evolve?

Rabbi Sharon Kleinbaum at CBST always encouraged me to reach out to Russian-speaking people here. When I needed support, there was nothing. That’s how I ended up at CBST. But I couldn’t do it, because I wasn’t out. It took me many years; finally, in 2008, I was ready. I said, “Rabbi, I will create the group and see what happens. But it won’t be a Jewish group. It will be for all Russian-speaking Americans that need support.” A lot of émigrés now aren’t Jewish. And at the Gay Pride Parade this year, we had 150 people marching with us.