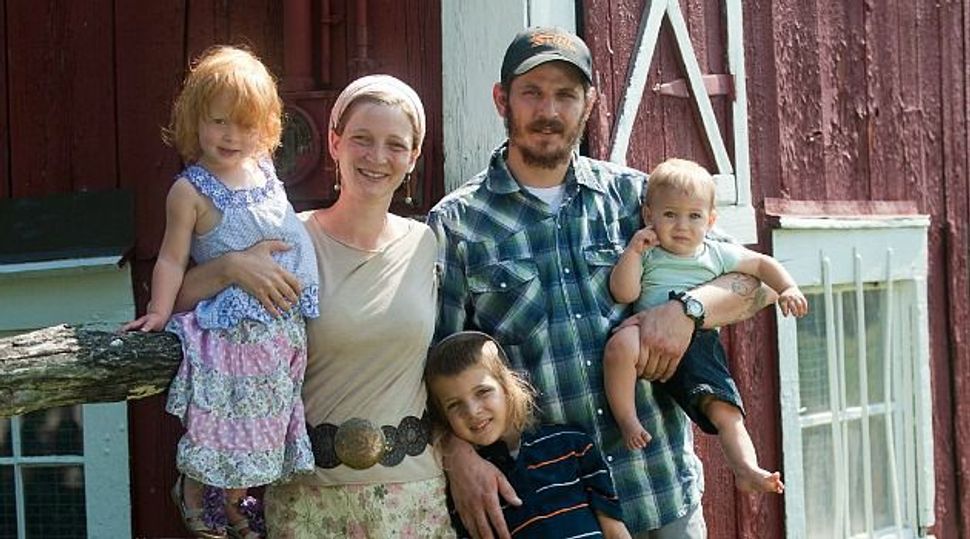 Let?s Get Together: Tova Kinderlehrer and her husband, Micah, are hoping to draw 10 Jewish families to their farm in rural Pennsylvania.

(JTA) — For most of the seven years Tova Kinderlehrer lived with her young family in Pittsburgh, she wished she were somewhere else.

Her son wasn’t doing well in school, her husband’s construction career had stalled and Kinderlehrer, though part of a “massive” urban community, felt isolated. She dreamed of escape.

In 2011, Kinderlehrer and her husband, Micah, bought a 38-acre property in Conneautville, Pa., they named Farm Schmarm. Along with their three children, they care for 16 hens, five turkeys and four roosters. Eventually they hope to use the land to raise kosher meat.

But the price of life in the country has been the loss of an observant Jewish community. So the Kinderlehrers are hoping to create their own, building the infrastructure they hope will eventually support an intentional community of at least 10 Jewish families.

“Right now it’s impossible to be a frum Jew outside the city,” Kinderlehrer told JTA. “We never wanted to settle there, but felt like we had no other option.”

Intentional communities are residential collectives designed to incorporate a high level of social interconnectedness, often organized around a particular cause or spiritual orientation. Examples include Israeli kibbutzim, communes, eco-villages and co-housing arrangements, in which residents typically agree to live together and share certain tasks like child care or food preparation.

A number of Jewish versions have sprung up across the country in recent years — including AVODAH, an anti-poverty nonprofit whose participants live in communal apartments in four cities, and the Adamah fellowship in Connecticut, where fellows learn sustainable agriculture and share housing at the Isabella Freedman Jewish Retreat Center.

But those communities generally are temporary and aimed at younger people. For families and individuals looking to live in such a community long term, the options are few and far between.

In an effort to make that vision a reality, Pearlstone has partnered with the Jewish environmental group Hazon and Isabella Freedman to organize the inaugural Jewish Intentional Communities Conference, which was held last week at the Pearlstone retreat center in suburban Baltimore. Organizers hope the conference will encourage the formation of a network of individuals already living in a Jewish intentional community or hoping to create one.

“Our hope is that this conference will bring many of these people together, and that by doing so we’ll really kindle that spark,” said Nigel Savage, the founder and executive director of Hazon.

The far-flung participants in the nascent Jewish intentional community movement embrace diverse approaches to community life. Some are hoping to bring communitarian principles to urban settings, but many aim to pursue intentional lifestyles in rural, agrarian environments.

“I feel there’s an agricultural aspect to Judaism that feels like it hasn’t been celebrated fully here in America,” said Stacey Oshkello, who with her husband, Craig, are planning a community in rural Vermont called Living Tree Alliance.

The Oskhellos already live in an intentional community, Cold Pond Community Land Trust, in Acworth, N.H. But while Oshkello says she has gained much from the experience, she feels a persistent lack of Jewish experience in her current living situation.

The community they hope to build will join an ecological agenda that includes animal-powered farming and herbal medicines with intensive Jewish life — “intertwined,” their website says, “like the strands of a challah.”

Steve Welzer and Delane Lipka, who are building an intentional community called Mount Eden Ecovillage on 180 acres in Warren County, N.J., already are in contact with five young Jewish families considering a move there.

“These families are looking to get back to a communitarian way of living,” Welzer told JTA. “With like-minded other people, they have a real sense of commonality and community. I think that’s what people are lacking in our world today, and it all comes back to roots, community and sense of place.”

Though diverse, the models of intentional community being explored throughout the country are broadly united in a view that something essential is absent from conventional expressions of Judaism in America. Conference organizers hope to harness a transformational impulse toward more spiritually informed and ecologically sensitive living taking root across the United States.

“Jews used to pray for rain,” Kinderlehrer said. “Now they just go to the supermarket.”

For Kinderlehrer, agrarian Judaism resonates with her spiritual orientation. She marvels that contemporary Orthodox Jewish communities eat Shabbat meals off Styrofoam plates and supplement their diets with margarine and marshmallows. She longs for a Judaism that exists in concert with the land.

“It’s hard to connect to Hashem in a paved world,” she said. “But we want to live in harmony with the land and let parents bring that idea to their children. Because the foundation of being human is being part of something larger than yourself.”