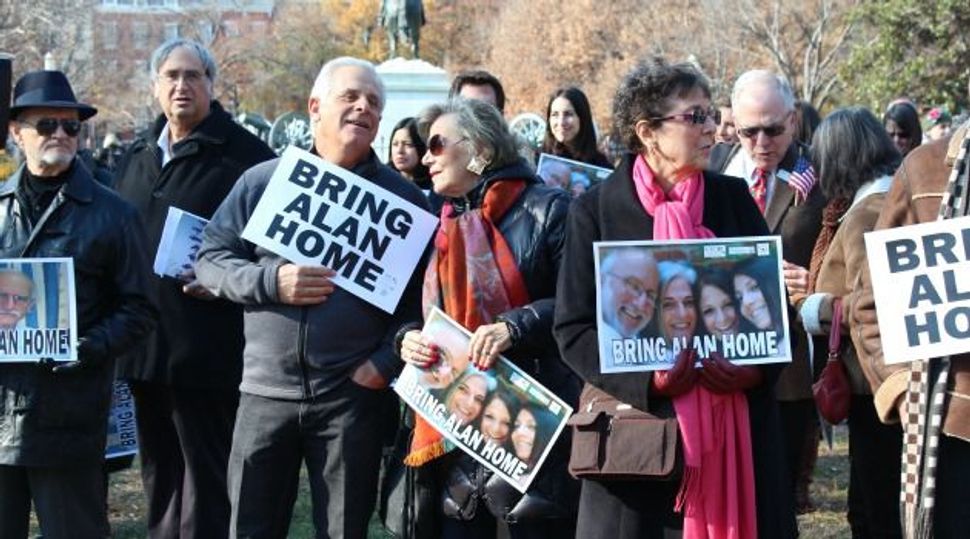 Marking Four Years of Imprisonment: At a December 3 demonstration across the street from the White House, activists call for the release of Alan Gross. Image by Nathan Guttman

The chants of “Free Alan Gross!” were unlikely to reach the ears of President Barack Obama in the Oval Office. But the gathering of several dozen activists outside the White House — on the fourth anniversary of the arrest of the Jewish American contractor in Cuba — highlighted a tactical shift in the movement for his release.

Once focused angrily on Cuban leader Fidel Castro, family members, supporters and Jewish activists today point to President Obama and his administration as the ones who have failed Alan Gross, leaving him to molder in a Cuban prison.

“It is up to our government to secure his release,” said Gross’s wife, Judy Gross at the December 3 protest. Standing across the road from the White House, Judy Gross listed the family milestones her husband had missed in his four-year imprisonment. “Imagine how he felt a few months ago when he couldn’t walk his daughter down the aisle,” she told the crowd made up of local politicians, supporters and members of the Washington Jewish community. “President Obama, imagine it was one of your daughters.”

Alan Gross himself, in a letter sent from his prison cell last week, made clear he was disappointed with his government’s treatment of his case. “Mr. President, please, please assure my family and me you will do whatever is necessary to get me out of this hell,” Gross wrote in a letter that was read aloud by his wife. “I’m fired up and ready to go, please do whatever it takes to keep this fire from being extinguished.”

In the past, the gatherings marking the anniversaries of Gross’s arrest were somber, but this year’s carried a tone of frustration. The lack of national interest in the Gross case, a failure to mobilize the public on the issue, and mainly, a sense that the Obama administration is ignoring possible openings from Havana, have all fueled the growing anger at the U.S. government.

“The U.S. has said it will not sit down if there are preconditions, but now the Cubans are not asking for any preconditions and our government still won’t sit down with them,” said Scott Gilbert, an attorney representing the Gross family.

Gilbert, joined by Judy Gross, visited Havana four times this year. In May he met with Cuban Foreign Minister Bruno Rodriguez, who Gilbert said discussed an offer that struck the Gross family and supporters as novel: Cuba is no longer tying a possible Gross release to America’s setting free a group of five Cuban intelligence operatives arrested in 1998 in Miami. One of the members of the group, known as the Cuban Five, was allowed to return to Cuba earlier this year.

Rodriguez, said Gilbert, made clear in the meeting that he is willing to come to the U.S. to negotiate Alan Gross’s release. But the foreign minister struck a more cautious and possibly contradictory tone in an interview with Agence France-Presse later that month, in which he stated Cuba’s “readiness to open serious, respectful talks,” while noting these talks would also have to take into account “reciprocal humanitarian concerns in the case of the other Cuban citizens still detained in the United States.” Though this does point to preconditions, it is still a much softer statement than those issued in the past, which did explicitly mention the Cuban Five.

Judy Gross called the administration’s insistence on “unconditional” negotiations with Cuba, a “death sentence for Alan.”

The Obama administration would not directly address a possible change in the Cuban demands, but rejected claims that it is not sufficiently active in its efforts to release Gross. “Securing Alan Gross’ immediate release remains a top priority of the United States,” said State Department deputy spokeswoman Marie Harf. White House spokesman Jay Carney, in his daily press briefing, said President Obama “has himself personally engaged foreign leaders and other international figures to use their influence with Cuba to promote Mr. Gross’s releases.”

Activists have also seen another glimmer of hope fade, when John Kerry took over the helm of the U.S. Department of State. As a senator, Kerry reportedly met with Cuban officials in an attempt to negotiate a deal for the release of Gross, but after taking office he did not take on the issue and Gross’s case has not reached the department’s top echelons. Speaking to reporters in Brussels on December 3, Kerry said that American diplomats are actively engaged in trying to bring about the release of captive Americans, but that “these things are often best resolved in quiet diplomacy, under the radar screen.”

Gross, 64, was arrested by Cuban authorities on December 3, 2009, days before the conclusion of his fourth government-backed mission to the island. A veteran contractor of the United States Agency for International Development, Gross focused his work on providing members of the Cuban Jewish community with Internet connections, which would enable them to bypass the strict limitations imposed by the government on access to the web. In February 2011, he was charged with “acts against the independence and territorial integrity of the state,” and was sentenced to 15 years in prison. The program Alan Gross worked on was funded by the 1996 Helms-Burton Act that called for active American involvement in bringing about political change in Cuba.

In prison, Gross has suffered significant weight loss and other illnesses. Back at home, in the Maryland suburbs of Washington, his daughter and mother have been struggling with cancer.

The Jewish community of Washington has been leading the charge for the release of Gross and the local Jewish Community Relations Council has organized vigils outside the Cuban interest office. “We are deliberately having today’s event outside the White House,” said Ron Halber, executive director of the JCRC of Greater Washington. “It marks a shift in tone. We are calling on the president to make this a national priority.”

On the national level, however, Jewish organizations were slow to follow. While the Conference of Presidents of Major American Jewish Organizations and most national groups expressed support for the release of Gross, the issue has rarely been raised in meetings with the administration.

In the past year, Alan and Judy Gross turned to the courts for support, filing lawsuits against the USAID and against Development Alternatives Inc., the contracting company that hired Gross to carry out the job in Cuba. In the lawsuits the couple claimed that both employers failed to properly present the dangers Gross faced in Cuba. The suit argued that their negligence had led to his arrest and to the loss of the family’s main source of income.

On May 16, DAI settled the case outside the court, providing the Gross family with an “undisclosed monetary amount” according to the company’s press release. According to the settlement, neither side admits any fault for the arrest and imprisonment of Gross.

The suit against the USAID was dismissed by the U.S.District Court for the District of Columbia, based on the principle that the federal government is not liable for events that happened outside the U.S. “The Court is in no way condoning what happened to Gross or implying he is to blame,” the May 28 ruling stated, noting that “sympathy with his plight, however, is not a basis on which to circumvent” the precedents of government immunity to these claims. The Gross’s lawyers appealed the ruling to the U.S. Court of Appeals in the District of Columbia and are awaiting a hearing.

Judy Gross is now focusing, however, on public advocacy aimed at her own government. “Was Alan naïve?” she asked, “in hindsight — yes.” But, she added, “it is up to our government to secure his release.”