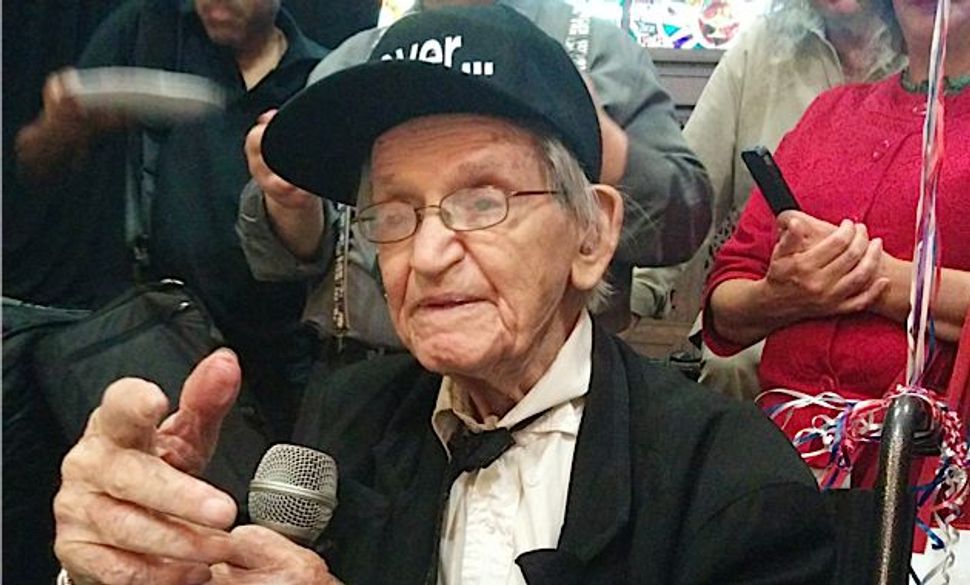 It is the view of “Professor” Irwin Corey — the self-described “World’s Foremost Authority” on practically anything — that if a man lives to be 100, he has the right to recite a limerick about farting at his birthday party, even if it’s inside a synagogue.

So that’s what happened July 29, when Corey, frail but still freylekh, greeted scores of well-wishers at The Actors Temple, in Manhattan. That is, after all, the synagogue where Jack Benny, Milton Berle, Henny Youngman and two of the Three Stooges davened.

Because the Forward has a long, proud commitment to verse, we present the limerick here in its entirety:

There was a young girl from Sparta
Who was a magnificent farter
She could fart anything
From “God Save the King”
To Beethoven’s Moonlight Sonata.

The Professor, as he has come to be known during a decades-long showbiz career, wore his signature black tails, string tie and high-top black basketball sneakers. Fans and friends, many of them north of 90 themselves, snapped photos with their cell phones as he struggled to unwrap gifts.

At first, Corey, an avid left-winger and so-called “9/11 truther” who believes that the 2001 attack on the World Trade Center was an inside job, wore a baseball cap bearing such slogans as “9/11 was a psy-op” and “Uncle Sam is a big bully.” But he eventually replaced the cap when he was given a black one with the single word “However” embroidered on it. “However” has been Corey’s longtime catchword in his act of “double-talk and nonsensical observations,” as Manhattan Borough President Gale Brewer described his shtick in a July 29 proclamation.

Throughout the celebration, Corey cracked one-liners and spewed political slogans.

“Sometimes I forget what I’m talking about in the middle of a word!”

“Solomon had 700 wives. Each wife had sex every three years.”

“The World’s Foremost Authority” informed the crowd surrounding his wheelchair that he had written to request a copy of the Declaration of Independence under the Freedom of Information Act. He held up a sheet of paper with heavily redacted text.

An outspoken anti-Zionist, Corey did not refer directly to the then ongoing war in Gaza that night at The Actors Temple. But he noted that “the Zionists” were using weapons that came from the United States.

It was one of the few lines that night that won him no applause or reaction from the assembled throng.

Born into deep poverty on Manhattan’s Lower East Side, Corey was raised, along with his four siblings, as a ward of the Brooklyn Hebrew Orphan Asylum. His mother, who’d been abandoned by her husband, could not feed, clothe and shelter her own children, so she paid the group home $30 a month to care for them to prevent them from being put up for adoption.

Corey inhaled the radicalism in the air then. As a teen he rode the rails out to California, where he first began doing comedy. He eventually worked his way back to the East Coast during the Depression, taking jobs along the way with the Civilian Conservation Corps, a New Deal employment project.

According to a 2012 profile in the Huffington Post, Corey met his wife, Fran Berman, at a Communist camp. They remained married for 70 years, until her death, in 2011. Asked by The Huffington Post for the secret to the success of their long partnership, he replied: “I wasn’t around that much. I was on the road half the time.” As for the Reds, Corey takes pains to note that he never renounced them — they rejected him. “They said I was an anarchist,” he told interviewer Myra Chanin.

Despite his politics, and despite being blackballed in the 1950s, Corey maintained close friendships with an impressively diverse range of fellow comics, from Republican Jackie Gleason, on whose variety show he appeared, to Lenny Bruce, whom he claims as a protégé. Mort Sahl, Dick Gregory and Don Rickles were among his friends. Corey was a performer in the late 1940s at soon-to-be famed venues such as the Hungry I Club, in San Francisco, and The Village Vanguard, in New York.

In his comedy act, Corey perfected the persona of a pompous pedagogue decked out in a seedy-looking tuxedo and high-top black Keds gym shoes. Standing at a podium with his hair askew and lecture notes in hand, Corey would stare at the sheaf of papers in apparent befuddlement, attempt to start, but then stop to gesticulate in amazement, or burst out laughing at some private joke. Finally, he’d launch into his lecture with his inevitable introductory word, “However!”

Inspired double-talk would quickly follow, such as: “Based on the state of inertia developing a centrifugal force which is used as a catalyst rather than a catalytic agent, which hastens a chain reaction and remains the same as the condition prior to its inception,” as Corey lectured during a 2008 performance at the Cutting Room.

Corey has coined some striking aphorisms that have found their way into the general culture, not infrequently via other comics whom he claims copped his stuff. “You can get more with a kind word and a gun that you can with just a kind word,” he once gently advised some friends.

Among the bold-faced names in attendance at his 100th birthday were Kenny Kramer, the real-life person used by Jerry Seinfeld for the character “Kramer” on his TV series; comedian Gilbert Gottfried; Ervin Drake, who penned the Frank Sinatra hit “It Was a Very Good Year,” and the former late-late-night talk show host Joe Franklin. Franklin told the Forward, “I go back with Irwin Corey about 200 years, and I’ve been to many banquets, but I gotta tell you that in all modesty this is the most recent. Thank you very much.”

Corey has failing vision and hearing. His audiologist, Jeff Stegman, showed up and presented a gift of hearing aid batteries.

“He gave me some hearing aids that don’t understand English,” Corey cracked. “Do you think I’ll live long enough to use these?” he asked, pointing to the batteries.

Stegman said that Corey assumed for some reason that he could also repair his electric shaver. He’s been bringing it in to the audiology practice for repairs, the audiologist related, and the office has been happy to fix it.

Corey’s son, Richard Corey, got off a few lines of his own during his speech: His father, he noted, had recently been diagnosed with a severe case of hypochondria and had been prescribed a massive dose of placebo.

One of Corey’s middle-aged fans mentioned that his parents saw The Professor perform in Greenwich Village on a night they were to see a performance by Lenny Bruce. The comic could not do his act that night on account of his being arrested for obscenity.

“I got Lenny that gig,” Corey recalled.

When asked who his favorite comedians were, Corey cited Bruce along with Richard Pryor, Jonathan Winters and Dick Shawn. Your Forward correspondent inquired whether Corey was proud to be a Jew. He replied: “I’m not proud. I was born Jewish. Like homosexuals are born homosexual. It’s not a choice.”