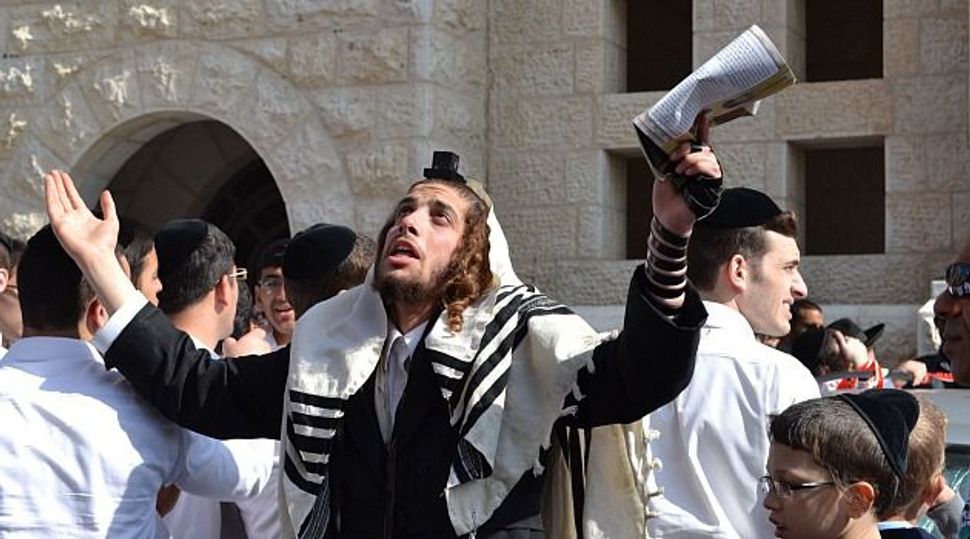 Kehilat Bnei Torah was supposed to be in a safe place, even in the most contested of cities.

The synagogue where two Palestinian terrorists killed four worshippers in a gun-and-knife bloodbath is in the picture-postcard West Jerusalem neighborhood of Har Nof, miles away from the tense seam line that divides the Holy City.

“I am very shaken, I feel very vulnerable,” said Lisa Goldenhersch, an American-Israeli who is a teacher in Har Nof. “So many people live right there and pray right there. It is astonishing.”

The violence was “like a pogrom from Europe,” Goldenhersch added.

As she spoke, police, paramedics and IDF swarmed around the imposing white building, which overlooks a sweeping panoramic vista of green and brown hills.

A 28-year-old Argentinian-Israeli who said he was in the synagogue during the attack said that it was significant that the attack occurred west of the Green Line.

“In East Jerusalem all the time there is fighting, but Har Nof is an area where there haven’t been problems thus far,” he said.

Two Palestinians armed with a gun and a knife burst into the synagogue and attacked worshippers, killing at least four before police killed the terrorists. Another eight people were seriously wounded.

The bloody attack came against a backdrop of weeks of soaring tensions in Jerusalem, fueled by the stalled peace process and disputes over the Temple Mount. But virtually all of the unrest has taken place either in Arab neighborhoods or near Jerusalem light rail stations close to the dividing line between East and West.

According to media reports, one of the Palestinians worked at a grocery store near the synagogue, which would have allowed him to know that the house of worship would be crowded at 7:00 AM.

“We are so kind, we are allowing Arabs to come into our neighborhood and work and support their families,” said Goldenhersch. “And this is what we have got in return.”

Four hours after the attack, hundreds of people were gathered outside of Kehilat Bnei Torah in Har Nof, a hillside community of about 20,000 Orthodox Jews. The West Jerusalem neighborhood is home to many Anglo immigrants as well as a sizable Spanish-speaking community. Rabbi Ovadia Yosef, the now-deceased spiritual leader of the Shas party and the former Chief Sephardic rabbi of Israel, had lived in Har Nof.

Kehilat Bnei Torah, a massive building with a gleaming white exterior, is one of the largest synagogues in the neighborhood. On Tuesday morning, paramedics were walking up and down the steps of the building, which was blocked off to the public by police tape.

A man with a prayer shawl over his head and tefillin wrapped around his arm stood with his back to the building, bowing and singing loudly in prayer.

A 21-year-old woman was standing behind a railing on a hill above the synagogue, overlooking the crowd. She had just dropped her 12-year-old brother off at school. He didn’t want to go but his teacher had called to convince him to come, telling him that they had to continue in spite of the attack.

“I’m shocked,” she said. “We need to daven so that the Messiah will come.”

Jerusalem deputy mayor Rachel Azaria told a reporter at the scene that “something changed this morning.”

“We woke up this morning to pain and to fear.” She said that today’s attack “feels different” from the recent Jerusalem violence because it happened deep in the neighborhood, in a synagogue and not on a street corner. “They came all the way into the neighborhood, into the shul.”

She said that the municipality is responding to the recent violence by strengthening security at kindergartens and schools, which she says are particularly vulnerable to attack. During the second intifada, she said that the city had a security budget for schools, but that it had been cut after the violence subsided. She has asked for the budget to be reinstated.

At about noon, a small sedan drove close to the synagogue with a loudspeaker, announcing the funeral for one of the victims of the attack.

The 28-year-old Argentinian-Israeli said there is no earthly answer to the violence plaguing Jerusalem today.

“Until the Messiah comes there won’t be a solution.”