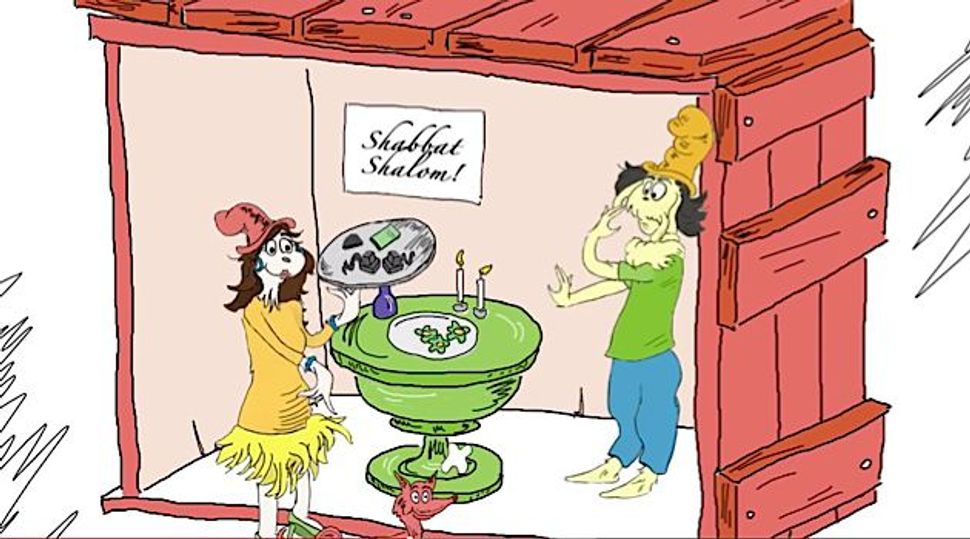 Try This at Home: ‘Jew in the City’ aims to make Orthodox Judaism understandable for non-believers — for example by producing the Dr. Seuss parody ‘Green Eggs, No Ham.’ Image by Jewinthecity.com

In March 2013, Jewish educator and activist Allison Josephs, now 34, went to lecture at Rockland Community College about the journey to observance she took when she was a teenager. With her Jew in the City blog and her YouTube presence, Josephs, who was raised Conservative, has become a self-appointed spokeswoman for Modern Orthodox Judaism, with the aim of demystifying religious Judaism for a secular audience. In her videos and at her lectures, she explains (with a little help from her pal Mayim Bialik) how science and Torah can coexist, what the purpose of a mikveh is and where the “hole-in-the-sheet” myth originated.

That day in Rockland, she talked about the death of a classmate and how it incited a childhood existential crisis that lasted until she discovered Orthodox Judaism at the age of 16. Today, Josephs identifies as “centrist Orthodox or right-wing Modern Orthodox.”

After the talk was over, a couple — “clearly Orthodox,” Josephs recalled, wearing a fashionable fedora atop her long wig and a knee-length dress when we met at a Coffee Bean & Tea Leaf in Lower Manhattan — approached her with a dilemma: They had left the insular Hasidic upstate New York village of Kiryas Joel, where they had grown up, because they felt it was too constricting. However, they wanted to remain observant, but found it difficult to learn more about Modern Orthodox theology. To whom could they turn? 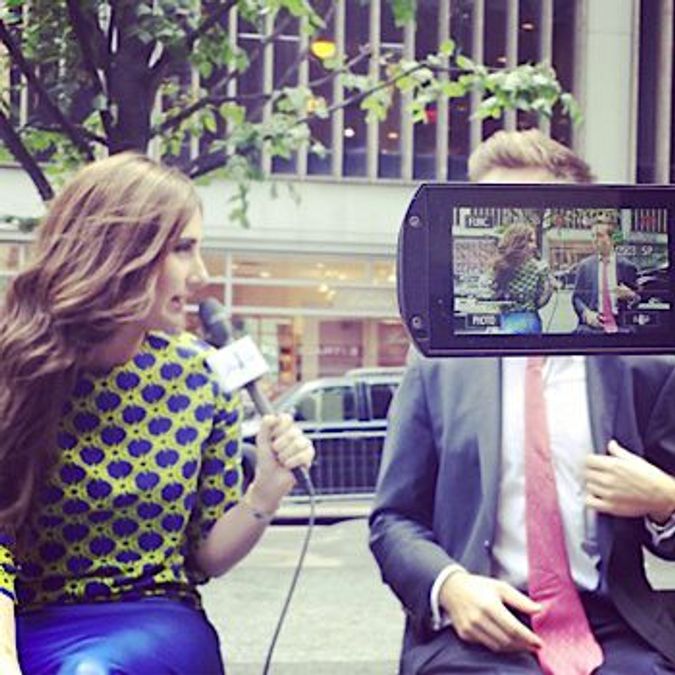 Woman on the Street: Allison Josephs (left) while shooting a video for her ‘Jew in the City’ blog. Image by Jewinthecity.com

It took Josephs two years of organizing and fundraising (she relies mostly on private donations from fans) to provide an answer to this question: Curious ultra-Orthodox Jews can now receive an orientation to the Modern Orthodox world via Josephs’s latest endeavor, Project Makom. It was officially launched this past December at Josephs’s annual Orthodox All Stars event — a gala and dinner where she recognizes a number of Orthodox Jews for their professional contributions to society — and soon it will offer classes on a variety of topics, along with religious mentorship, career training, and support groups for those struggling with the transition between ultra and Modern Orthodox worlds. Josephs and her co-directors, Schaper and Gavriella Lerner, a social work student and teacher, respectively, are currently planning their first official shabbaton, or retreat, where they will offer lectures on, among other things, women in Jewish scholarship and minhag, custom, versus Halacha, law, in mid-April in the New York tristate area.

The mission of Josephs’s first project, Jew in the City, was to rebrand Orthodoxy for non-Orthodox Jews and non-Jews. “What I didn’t realize was that we needed to rebrand it for some Orthodox people,” Josephs said. She firmly believes that she is meeting an existing need, and by establishing Makom — which means “place” in Hebrew — she can show those formerly constrained by religion how to access the strength and liberation she finds in it. “Faith should be there as a thing to lean on, not something to hold you back and to make you feel trapped,” she said. “Even though it’s a little bit of a diversion [from the original mission of the Jew in the City blog], it still fits into the core goal of publicizing this to everyone who doesn’t know that this is possible.”

There are no statistics on how many people who leave ultra-Orthodoxy remain somewhat observant. Hella Winston, sociologist and author of “Unchosen: The Hidden Lives of Hasidic Rebels,” suggests that most who leave the fold do so entirely. This dramatic shift in lifestyle is likely a consequence of the rigid doctrine taught to community members from a young age, Winston said: [“Most people told me that, as members of the Hasidic community, they were raised to believe that there was only one ‘true’ Judaism: the one they were taught.” Oftentimes they find themselves alone and adrift in a culture they don’t fully understand, and turn toward drugs, alcohol or risky sexual behavior for temporary comfort. “Maimonides talks about finding the golden mean,” Josephs said when I asked her about the now-familiar tale of ex-Hasids struggling with depression, anxiety or substance abuse. “If their whole life has been about what you can’t do, then they think, ‘Let’s see what it is when I do everything,’ as opposed to finding that happy medium.”

Modern Orthodoxy, she said, is uniquely suited to help Jews reach that place because it adheres to the principles of Torah Umadda, the idea that secular and Torah learning are complementary values. The prevailing Haredi belief, to contrast, is that one should seek to focus solely on acquiring knowledge necessary to a Haredi life, often at the expense of honing skills desirable to secular employers or pursuing higher education. Many Haredim who go off the derech, the path, say they were inspired to do so because they were disturbed that their children would feel as unprepared for life in the 21st century as they did. A former Satmar Hasid from Monsey, New York, who is a father of one and asked that his name not be used so that he could protect his family, hopes Makom will help him find a middle path not only for himself, but also for his 5-year-old son. “I want him to have a full experience of a normal American Jewish boy,” the father said. “In a Hasidic school, they do not work on bringing out every bit of skill in young kids… I want him to be exposed to a very diversified kind of life, not just one specific way of thinking.”

Though Makom is the first to offer spiritual education, it is not the only program that focuses on the specific problems endemic to this population. The best known is Footsteps, which has helped about 800 Haredim leave their communities, gain entrance to college and survive sometimes debilitating culture shock since it was founded in 2003. While there is always kosher food available at Footsteps, the organization is avowedly hands-off with regard to faith. “We’ve stayed very far away from having a religious agenda, because it’s important for people to feel like they can come here,” said Lani Santo, the organization’s executive director. “We certainly want people to have a healthy relationship with their Jewish identity, but that should be their choice.” Santo questioned the demand for the service Josephs intends to offer. “I think there are clear communal spaces for people who want to remain Orthodox to walk into,” she said, mentioning Chabad-Lubavitch. “If there’s a cohort of people who do want that, I think that’s totally wonderful, but that’s not the majority of people we see. [Most believe] Modern Orthodoxy is just a watered-down version.”

Former Chabad shliach, or emissary, Rabbi Levi Brackman, who, together with Satmar-Hasid-turned-Open-Orthodox-rabbi Ysoscher Katz, runs Frum and Stuck, a confidential online counseling service for those questioning their Haredi beliefs, echoes Santo’s statement. “In the 18 or so months of doing this, I have not seen one person become Modern Orthodox from being Haredi. If they stay religious it is often, in my experience… because they have done the hard work of reconciling, in an autonomous fashion, their faith with a version of the Haredi life or because they have chosen to live a double life.”

As to the question of Modern Orthodoxy’s lack of appeal to Hasidim, Katz says it’s an intriguing issue that’s been examined often but never fully solved. “It might be that [Josephs] can come up with a way of marketing it that will address some of the concerns people have mentioned,” he said. Many who leave the Haredi world, he clarified, feel that after all their struggle, they want to be sure they can “fully enjoy what secularism has to offer,” and not find themselves caged in by a new set of rules, even if it is a more lax one. 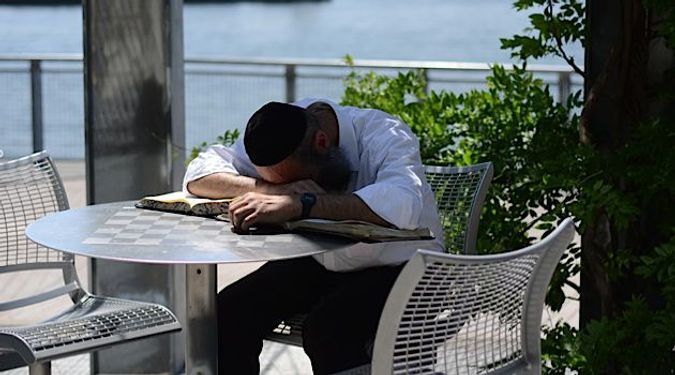 Leaving Forever? There are no statistics on how many people who leave ultra-Orthodoxy remain somewhat observant. Image by Gedalya Gottdenger

They also can feel betrayed by the stringent religious authorities of their youth, and become reluctant to trust any replacements, as Shulem Deen, a prominent writer who grew up Hasidic, points out in an essay for Zeek, titled “Why I Am Not Modern Orthodox”: “[The religious authorities] distorted essential laws with excessive restrictions, emphasizing its letter over its spirit; they distorted tradition by falsely claiming that what is now has always been; they have distorted history, even, rewriting past events and recasting historical figures to align with current ideologies.” So why, he concludes, think any other rabbi would be better?

Others wonder if Josephs is zeroing on the right problems. “I think Makom is a wonderful initiative, but I want to see them address more than areas of hospitality,” said Frieda Vizel, who writes frequently about her departure from the Hasidic community where she grew up, via email. “The question on which I rest its ability to be successful is this: Can the Orthodox community deal with ‘exploration’ of ex-Hasidim? Because my feeling is that this fear that ex-Hasidim are only stopping over on their journey [to secular lives] is the issue that creates the friction.”

Even if Makom plans to cater only to those who plan to stay observant, there’s early evidence that keeping them engaged might be difficult. At a recent soft launch event for Makom, while Josephs explained how the trappings of a suburban American childhood left her empty, a hulking Hasidic attendee shot back with resentment: “I want 18 years of gymnastics and bacon.” Josephs believes the challenges ahead are worth meeting if it means helping just a few Jews make peace with their birthright. “D’racheha darchei noam v’chol netivoteha shalom,” she says, quoting Proverbs. “‘Her ways are ways of pleasantness, and all her paths are peace.’ That’s what it comes down to: Every Jew should have access to the beauty. And if people want to reject it, that’s fine. We just want to make it accessible.”

Kelsey Osgood is a freelance writer who often covers Jewish culture. She is the author of “How To Disappear Completely: On Modern Anorexia” (Overlook Hardcover, 2013).