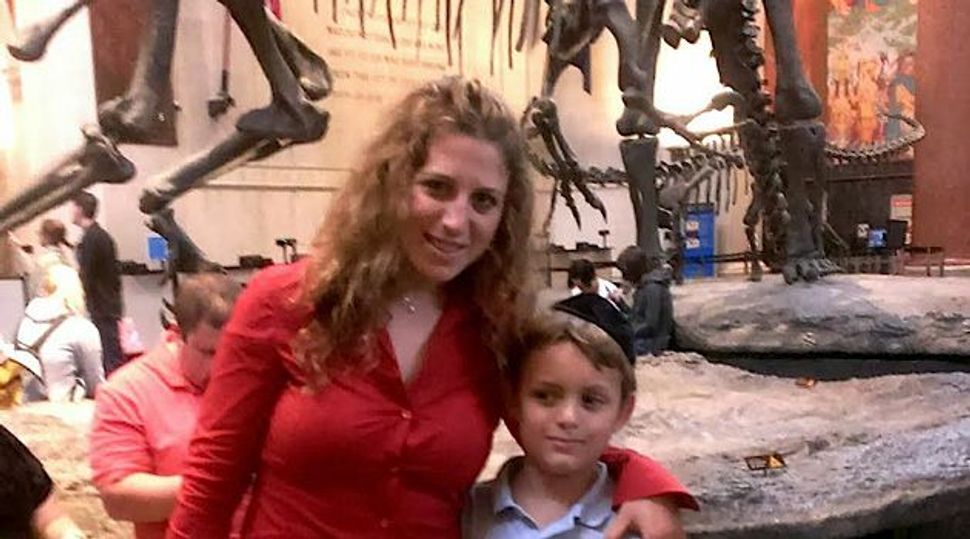 On Saturday, I was walking on Amsterdam Avenue in New York City, crossing over to the other side with my son Seth when a man with white stubble and a New Jersey accent stopped me and asked: “Do you want to be a tenth to minyan?”

I was shocked. I looked at him and asked: “Me?”

I was caught so off guard; I wore nothing that gave me away as Jewish. Just black leggings and a red shirt; boots. An ordinary outfit. I felt so integrated into the New York City weekend scene. But my eight-year-old son, who often chooses to be more religious than me, had his yarmulka on, so he gave me away.

I never thought anyone would ever ask me to be a part of a quorum for prayers. According to Jewish tradition, the presence of God descends to where there are ten men. Only in egalitarian synagogues women are also counted. I’ve watched men look for a tenth for minyan many times, because I grew up Hasidic and the men needed a minyan three times a day. When my grandfather was old and frail we held prayers in our house and finding ten men older than 13 who could make it was often a problem. We called the extended social network; cousins and neighbors and far away relatives who would make the effort for the sake of the grandfather; but I would never be called. I often helped get the men by running after younger brothers and knocking on neighbor’s doors to ask if someone could come be a tenth. After I got married at eighteen, I could help by sending my husband to be part of prayers when there was a need for minyan, but that was the only extent to which I could participate. Then I left the Hasidic community and began to explore small, tentative ways I can express my Jewish identity and be part of the Jewish community.

I stood there on this rainy Saturday and looked at the kindly Jewish man in astonishment. A part of me wanted to remind him that I was a woman and couldn’t be part of the minyan even if I wanted to, and a part of me was so deeply touched that this man valued me for religious services as much as he would a man.

It was the kind of evening you’d least expect anything to happen. I was on my way back from the Museum of Natural History, in the middle of eating a giant red meatball off a fork. It had been raining all day and my son and I had walked outside for quite a while. I wore an Amazon box over my head in place of an umbrella, so instead of having wet hair, I had big, frizzy, crazy hair. My son and I were spent and hungry and engrossed in our conversation about the red diamond exhibit we had gone to see, and minerals and meteors and other things we loved, and we were going to drive home and talk some more. And there he was: a man looking for minyan. I wanted to cry, I was so happy to be asked. So I said I’ll do it. We turned around and crossed back over Amsterdam Avenue.

I followed him to the site of a conservative synagogue, Congregation Shaare Zedek. Seth and I sat outside and finished our food. Then we took our seats in the big sanctuary and waited a while. People piled in slowly, a trickling rainy late Shabbat attendance, but there was a minyan for sure. Everyone greeted me and asked me if I was new to the neighborhood. I said no, I’d come to the gemstone exhibit at the Museum of Natural History, I was walking to my car, I was eating a meatball, I live in Rockland, that older man over there picked me up off Amsterdam Avenue. I explained that I grew up Orthodox, Hasidic, and while I know of course how to pray, I had never thought anyone would ever ask me, a woman, to be part of a minyan. I said men were asked this question all the time; men were begged to join, men were asked when an elderly was sick and there was a desperate need for a temporary minyan in the house. And there were women everywhere, but they were never asked. We never counted. However hard it was to find a minyan, women couldn’t help make one. I was always so inspired when I learned about women (and men) who had been concerned about this lack of inclusiveness of women, and I knew that those who fought for progress had changed Judaism for all of us, but I never thought it would open such a welcoming door for me.

I got a prayer book and we prayed the mincha, the second prayer of the day.

I was called up to the third aliyah to recite the blessings for the reading of the Torah. My son Seth stayed in his seat and watched me go up. They called “Frieda bas…” (Frieda, daughter of) my parents. Both my parents. I said the blessing, listened to them recite the portion of the Torah, then made another blessing according to the instructions. I was so embarrassed with my shaky enunciation, my orthodox Hebrew letter sof (which the orthodox still use, but is collapsed with the tof in modern Hebrew), my lack of knowledge of all of the synagogue procedures. But I was also so so proud. So proud to stand at our Torah as if I was equal Jew.

The man who read the portion of the Torah asked me if I wanted to make a shecheyana blessing, which is said when someone new is done, because I had my first aliyah. I said yes. So I said the blessing that reminded me of candle lighting during my days as a Hasidic woman, and of the holiday when I was a child and the pretty dresses I wore when I said this blessing. Everyone in the synagogue said amen and a joyous “Mazel tov!”

And my hair felt crazy wild, and the air felt cold and damp and it was all so surreal, so unexpected, but I was so touched. I always knew there will be a time when I will find a more open place in Jewish tradition; but this one came so unexpectedly and so generously.

And my son was there to see it all.

Frieda Vizel grew up in the Hasidic community of Kiryas Joel and left the lifestyle with her son. She now explores contemporary Hasidic culture through creative and academic work. Frieda is a graduate student at Sarah Lawrence College and tour guide for Hasidic Williamsburg walking tours. Her website is www.visithasidim.com.