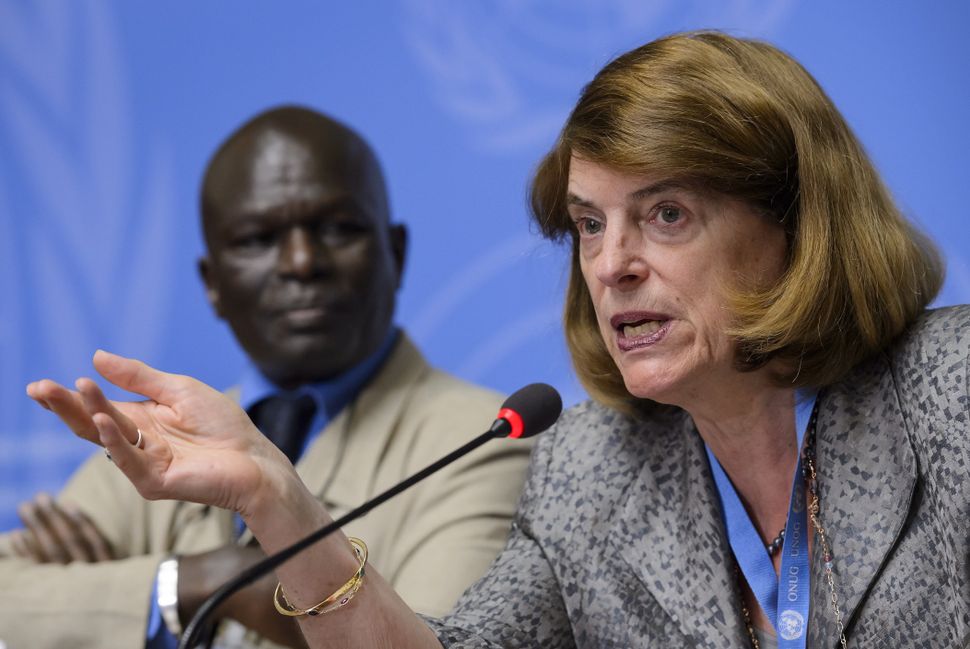 Mary McGowan Davis, the American judge who led the independent United Nations probe into the events of last summer’s war in Gaza, said the main message committee members wanted to transmit is that Israel must reexamine its policy of using its military might against civilians, because it led to unprecedented destruction in Gaza and to the killing of about 1,500 innocents.

“We wanted to make a strong stand that the whole use of explosive weapons in densely populated neighborhoods is problematic and that the policy needs to change,” she emphasized in a phone interview from Geneva, where she presented on Monday the findings of the months-long inquiry she conducted. “Because it is not OK to drop a one-ton bomb in the middle of a neighborhood.”

McGowan Davis received the task last March to head the UN Human Rights Council’s investigation, after the chairman of the previous commission, jurist William Schabas, was forced to resign in disgrace because when emerged that he had failed to disclose that he had previously provided a legal opinion to the Palestinian Liberation Organization for a fee. Israel, which revealed this fact in a complaint, opposed Schabas because of his anti-Israel views – he once declared Prime Minister Benjamin Netanyahu should be tried in the International Criminal Court in the Hague.

It’s hard to portray McGowan Davis as anti-Israel. A few years ago, when she headed a committee dealing with the implementation of the Goldstone report on Operation Cast Lead in Gaza, Israel decided not to boycott her and to cooperate with her on a limited basis. The report that McGowan Davis issued at the time was balanced; Jerusalem received it with satisfaction.

“It wasn’t serious criticism of one’s work – first read it and then we can speak about the merits,” she said. “It wasn’t personal attacks against me or my work but against the Human Rights Council. It’s not new and not really affecting me… I know Israel’s concerns [about the UN Human Rights Council] and I respect that.”

The fact that Schabas initially headed the commission only convinced Israel even more that the correct policy was to boycott it. Israel did not allow the committee to go to the Gaza Strip or to the Israeli communities surrounding the Strip, and refrained from any contact or connection, even indirect, with its members. Even after Schabas left and McGowan Davis took on the task, Israel did not remove the boycott.

“Israel has to decide what its interests are,” she said. “We didn’t get cooperation from Israel so we found other ways.”

‘Report would have looked different if Israel had cooperated’

The American judge said the report was largely based on the coverage and documents posted by the Israeli government on the Internet during the course of the past year.

“We used a lot of the material Israel posted online and the Israeli point of view was represented in the report,” she emphasized.

She hasn’t read the Israeli “response report” that was launched at a festive press conference in the Foreign Ministry last week, mainly because an initial examination by her staff revealed that most of the information that appeared in the report was already in the hands of the commission because it was sent by pro-Israeli organizations in recent months.

Another source of information regarding the Israeli angle was the former commander of British forces in Afghanistan, Col. Richard Kemp, who headed a group of generals and senior officers from Western armies who visited Israel in order to write a report about the conduct of the Israel Defense Forces in the Gaza fighting.

The members of the group met with Prime Minister Netanyahu, Defense Minister Moshe Ya’alon, outgoing Chief of Staff Benny Gantz, his successor Gadi Eisenkot and five of the General Staff generals. They conclusion that the IDF had adopted stricter standards than any other Western army in the world in order to refrain from harming civilians in Gaza. McGowan Davis said Kemp had sent her an abstract of the report and it was taken into consideration during the committee’s work.

When McGowan Davis is asked about Israel’s conduct vis-à-vis the committee she replies politely and diplomatically, but makes it clear that Jerusalem’s decision was mistaken.

“I certainly think it would have been different if Israel had cooperated,” she emphasized. “We could have met with Israeli victims and seen where rockets landed, talked with commanders, watched videos and visited Gaza. We talked to a lot of witnesses but of course an investigation needs to be as close to the scene as possible and it would have looked different.”

When the name of her predecessor, William Schabas, comes up, McGowan Davis politely sidesteps it. She doesn’t believe that Schabas tainted the work of the commission and emphasizes that the process of analyzing the testimony and writing the report began after Schabas’ resignation.

“After he stepped down we started getting a lot of new information from Israelis who sent us emails. We had a lot of new work and this is why we postponed the publication of the report,” she says.

After the report was published many on the right, like Im Tirtzu or Immigrant Absorption Minister Zeev Elkin, attacked the Israeli human rights organizations, claiming that they had cooperated with the commission in order to denigrate Israel.

“I don’t think it’s correct to say they cooperated with us. We read reports of the big Israeli NGOs that were publicly available. Some did cooperate and some didn’t, and we did our own research. Many of the submissions that underpinned many of the conclusions were from residents of Gaza and Israel we spoke with. We wanted to hear firsthand accounts.”

Didn’t the fact that the commission wasn’t in the area undermine the reliability of the report?

“I don’t think so. We are very candid in the report about the limitations we worked under. We were straightforward and said we don’t have firsthand evidence on many things. On the other hand, many people who were there submitted evidence and we did the best we could with what we had. I think the report gave a good picture to the world on what went on last summer in Gaza. We were not a judicial investigation and this is why we were not pointing fingers at anybody specific.”

One of Israel’s main complaints about the commission was that its mandate determined in advance that war crimes were committed in Gaza. McGowan Davis claims that despite the wording of the mandate, the commission interpreted it differently. The proof, she says, is that the final report did not determine that war crimes had been committed, but only pointed to the existence of apparent evidence of that.

In the report you tried to find a balance between Israeli and Hamas actions. Israel is a country that even if it fails, still tries to act according to international law and to refrain from harming civilians. Hamas is a terror organization. Isn’t the comparison morally objectionable?

“We were not in charge of conducting a moral investigation but to check if the international law was violated. We were not looking to balance in any sense other than looking at what both sides did. We didn’t compare between Israel and Hamas. We looked at what happened and applied the legal standards to it. The law puts them on the same level, and we follow the law.”

McGowan Davis doesn’t know what the UN Human Rights Council will do from here with the report authored by her and the commission members. She emphasizes that the most important thing for her is to let the world hear the voices of civilians in Israel and in Gaza who were harmed. “I hope people read the report,” she says.

In light of everything you saw and heard, do you believe that there’s reason to open an investigation by the International Criminal Court in The Hague?

“We said we did believe the international community should support the ICC preliminary examination. I am not going to prejudge what the ICC does. I don’t want to make a prediction. That is for the prosecutor.”

What would you like Israel to do with the report?

“I hope Israel will look at this report at the highest levels where the policy about the use of explosive weapons is determined. I wish Israel would really conduct credible, transparent and thorough investigations about what happened last summer to see if things went wrong and if criminal accountability is needed.”

Even if she doesn’t say so directly, McGowan Davis believes that the IDF cannot investigate itself and that despite the efforts of the Military Advocate General, the impression outside Israel is that the investigations aren’t serious. As an example she cites the killing of the four children on the Gaza beach on July 16, 2014, an incident where the MAG decided to close the file.

“It is troubling. We saw that there were a lot of witnesses there who were never interviewed [by Israeli investigators]. People have no confidence – and it is important when it comes to justice.”

McGowan Davis believes that Israel should establish an independent commission of inquiry to answer the questions that remain and enable the Palestinians who were harmed to present their version of events.

“I am not sure the citizens of Gaza feel this was done, and we understand where they are coming from because it is hard to know how effective the investigations were,” she says.

But perhaps the conclusion from all this is that international law doesn’t provide a solution to a situation in which regular armies of democratic countries fight against terror organizations in the heart of populated areas?

“I know there are many people who think international law needs to develop standards that more accurately deal with military operations … But if the law changes it is to make protection of civilians stronger so that you will not be able to drop a one-ton bomb on a neighborhood. My role is not to tell the IDF what to do, but to set the legal standards and to describe what happened. My job is not to tell them how to wage a war.”

For more stories, go to [Haaretz.com] or to subscribe to Haaretz, [click here]and use the following promotional code for Forward readers: FWD13.