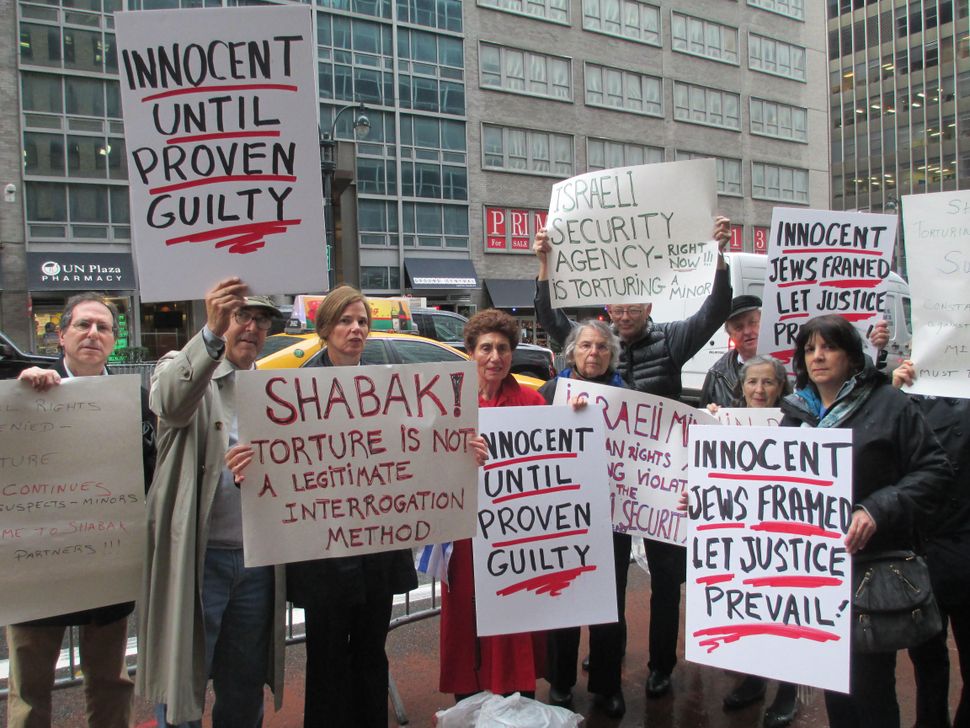 Israeli security authorities are holding a 17-year-old American Jewish citizen named Elisha Odess in seclusion, where his family alleges he’s been interrogated using harsh methods that amount to torture, amid a crackdown on Jewish extremists.

Odess, who was born in Israel and holds dual Israeli citizenship, “has been abused so severely that he tried committing suicide,” Blumi Odess, his grandmother, told the Forward in an exclusive interview. She spoke after attending a December 22 rally outside the Israeli Consulate in New York City alongside Odess’s aunt and uncle to protest her grandson’s treatment.

Odess, whose name has been barred from publication in Israel, has been in the custody of the Shin Bet, Israel’s internal security agency, since November 25, according to family members. He has not been charged with a crime. He was not allowed to see an attorney for weeks, and he was allowed to see his parents only once, on December 17. American consular officials were turned away when they attempted to visit Odess, his aunt Ilana Odess said. 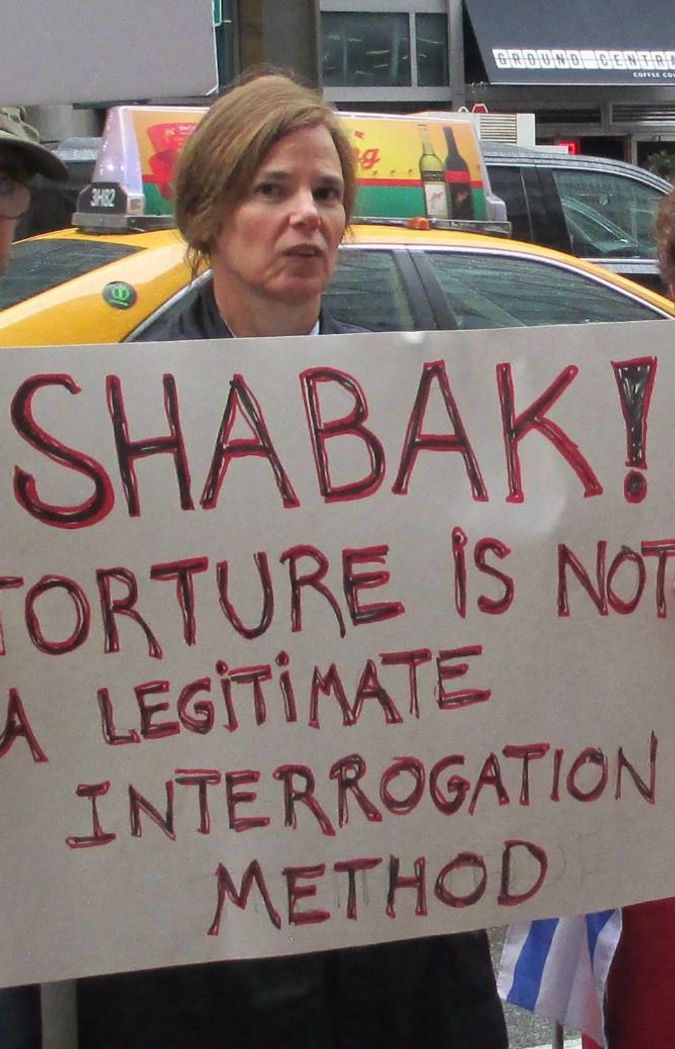 “He didn’t see anyone outside of the [Shin Bet] for 21 days,” she said. While the alleged treatment of Odess mirrors the way Israeli security authorities have detained tens of thousands of Palestinians over the years, the practices are seldom applied to Jews.

The Shin Bet defended its conduct in a December 17 press statement in which it said it was necessary to keep Jewish terror suspects in detention because of its duty to “to thwart their intention to continue perpetrating serious terror attacks that are liable to lead to casualties.”

Odess’s attorney, Adi Kedar of the settler legal aid group Honenu, could not be reached for comment by press time.

Ilana Odess said that her nephew had been subjected to sleep deprivation, had been hung from his hands “until his wrists were cut,” and had been interrogated while in a stress position that put his back in “amazing pain.”

Odess was confined to his home by court order beginning on August 10, days after an arson attack in the Palestinian village of Duma in the Israeli-occupied West Bank that killed an 18-month-old Palestinian infant and his parents, members of the Dawabsheh family. 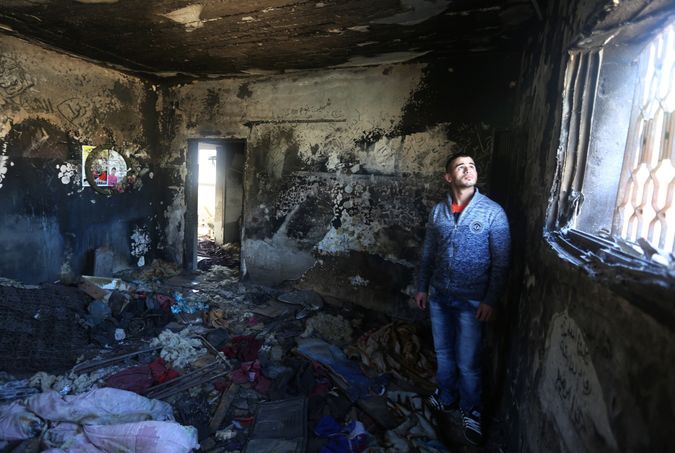 “My son is not connected to the Duma arson in any way,” said Naamah Odess, Elisha Odess’s mother, in a recording played for the Forward by Ilana Odess. “Yet that did not stop the Jewish department of the [Shin Bet] in arresting him and physically and psychologically torturing him, to the extent that he tried to commit suicide.”

Elisha Odess’s name has not appeared in the mainstream press, though it has been printed on some websites, including Electronic Intifada and the blog Tikkun Olam.

Israeli law allows the security authorities to detain suspects indefinitely without charges, subject to court authorization, a practice called administrative detention. Agents of the Shin Bet, Israel’s internal security service, are allowed under some circumstances to employ so-called special methods of interrogation, which some advocacy groups have said amount to torture.

Ilana Odess confirmed that Elisha Odess was the subject of a December 20 Haaretz report on an unnamed minor who, held on suspicion of involvement in Jewish terrorist activities, told an Israeli judge that the Shin Bet was torturing him. The article reported that the minor told the judge he had attempted suicide. The date of the unnamed minor’s arrest matches the date of Odess’s arrest. According to the Haaretz report, the minor broke down crying in the courtroom. “They are taking me apart, bending my whole back, laughing and looking at me with contempt,” he said. “They turn me upside down until my hands start burning. It feels like they are burning me with a lighter.”

According to the Haaretz report, the judge “did not ask the police or Shin Bet for any clarifications.” The Shin Bet told Haaretz that the detainee had not attempted suicide and that the agency had acted “in accordance with the law.”

At a December 17 press conference in Israel, Odess’s attorney and other attorneys representing Jews held by the Shin Bet following the Duma fire alleged that their clients had been tortured. The Shin Bet quickly issued a forceful statement defending its conduct and attacking its detractors.

“A Jewish terror organization has been under investigation recently, whose activity is suspected to include serious terror attacks,” the statement read, according to a report on the Israeli website Ynet. “This organization adheres to an extreme, anti-Zionist ideology, that has set itself the goal of violently overthrowing the Israeli government.

“The terror attacks that are suspected to have been carried out by the organization led to, among other things, the murder of three innocent Palestinians.”

The Shin Bet statement claimed that the agency was facing a “proactive and ongoing effort to slander the [Shin Bet] and its work, and to disrupt its activities. This attempt deserves full condemnation and will not deter the Shin Bet from continuing its work as envoys of the citizens of the State of Israel, in line with national values.” Days later, on December 22, Israeli Prime Minister Benjamin Netanyahu defended the Shin Bet’s conduct. “The head of the Shin Bet, Yoram Cohen, and his staff are doing important work,” Netanyahu said, according to Haaretz. “The attacks on them are unacceptable to me.”

Elisha Odess grew up in the West Bank settlement of Tzofim, near the Palestinian city of Qalqilya. The son of a rabbi, Odess has six siblings. Odess was not attending high school at the time of his arrest. His grandmother said that he was “basically living at home,” but was also staying at hilltop settlement outposts in the West Bank.

Since Odess’s arrest, other members of his family have also been interrogated. Blumi Odess said that Odess’s mother, sister and an aunt were “interrogated in a very hostile way.” The aunt, who lives in Israel, was “interrogated, insulted, spit at,” Blumi Odess said. “She can still hear the shouts.”

“We believe he has nothing to do with this case whatsoever,” Ilana Odess said. “We welcome [the chance] to catch the people that did this atrocious thing, we welcome it. But it has to be within the means of the law.”