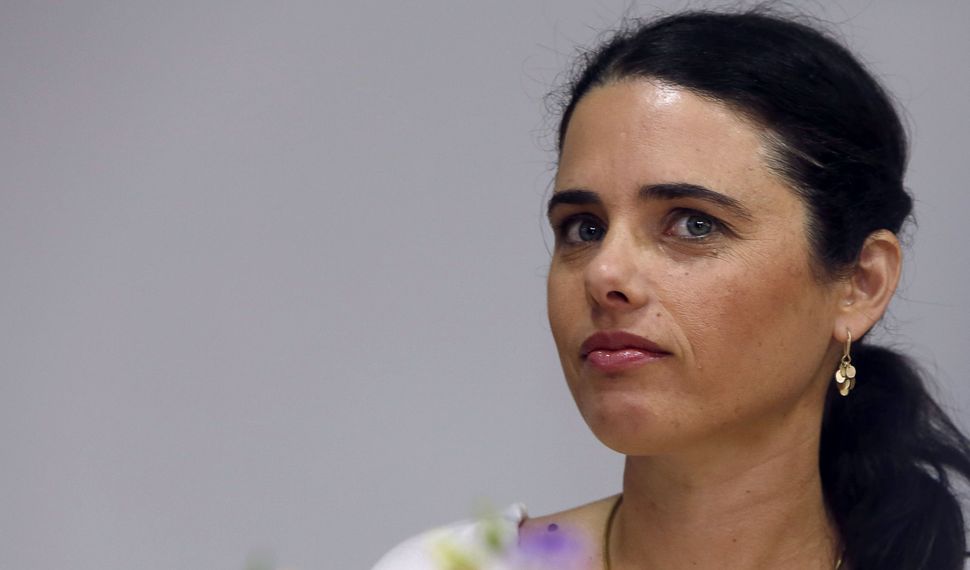 Israel’s minister of justice met last week with the mother of an Israeli-American teen held in isolation by Israeli security authorities amid a terrorism investigation, the teen’s attorney told the Forward.

The highly unusual meeting with Justice Minister Ayelet Shaked, a member of the right-wing Jewish Home party, was attended by Adi Kedar, a lawyer with the settler legal aid group Honenu, and Naamah Odess, mother of the 17-year-old detainee Elisha Odess.

Odess, whose family says he has been tortured by interrogators, is among a handful of Israeli Jews held without charge in the wake of the July arson murder of three Palestinians in the West Bank town of Duma.

A spokesperson for Shaked could not be reached for comment about the meeting. Yet Shaked told the right-wing Israeli news outlet Arutz Sheva on December 22 that after “complaints” were brought to her attention, she had been in “close contact” with the head of the Shin Bet, among others, to “make sure red lines were not crossed” in interrogations of suspects in the Duma arson case.

Shaked said that she had been told that claims that a detainee attempted suicide in custody were untrue. Odess’s family has said that he attempted to kill himself.

While the treatment of Odess and other young Jewish Israelis now held by the Shin Bet has sparked protest on the Israeli right, Israeli human rights attorney Michael Sfard said that their situation is radically different from Palestinian detainees, who are held without charges and interrogated harshly in much higher numbers.

Odess has been in the custody of the Shin Bet, Israel’s internal security agency, since November 25. He was barred for weeks from seeing an attorney, and family members say that American consular officials were barred by Israeli authorities from seeing him. No charges have been filed against him.

Naamah Odess, in an audio recording played for the Forward, asserted that Elisha Odess was “not connected to the Duma arson in any way.” She and other family members claim that he has been tortured during interrogations. The Shin Bet has strongly denied violating any law in holding and questioning him.

Right-wing Israelis have protested the treatment of Odess and the handful of other Jewish detainees. While Israeli security authorities often subject Palestinian detainees to harsh interrogation techniques — deemed torture by many human rights groups — and detain them for long periods of time without trial, those practices are almost never applied to Israeli Jews.

“When the Israeli human rights community was fiercely fighting to criminalize torture, as international law demands, the right would not join,” Sfard said. “I can only hope the Israeli right will now join initiatives to outlaw any type of torture and degrading and inhumane treatment”

That seems unlikely. Helen Freedman, executive director of the right-wing Americans for a Safe Israel, said that her group would not take a stance opposing the Israeli security authorities’ use of harsh interrogation tactics. “Whatever Arabs experience in prison is something separate and apart from what Jews experience,” she said. “Arabs are terrorists, they’re killers… Every single day there’s Arab terrorism. So why are we equating that with what these boys supposedly did?”