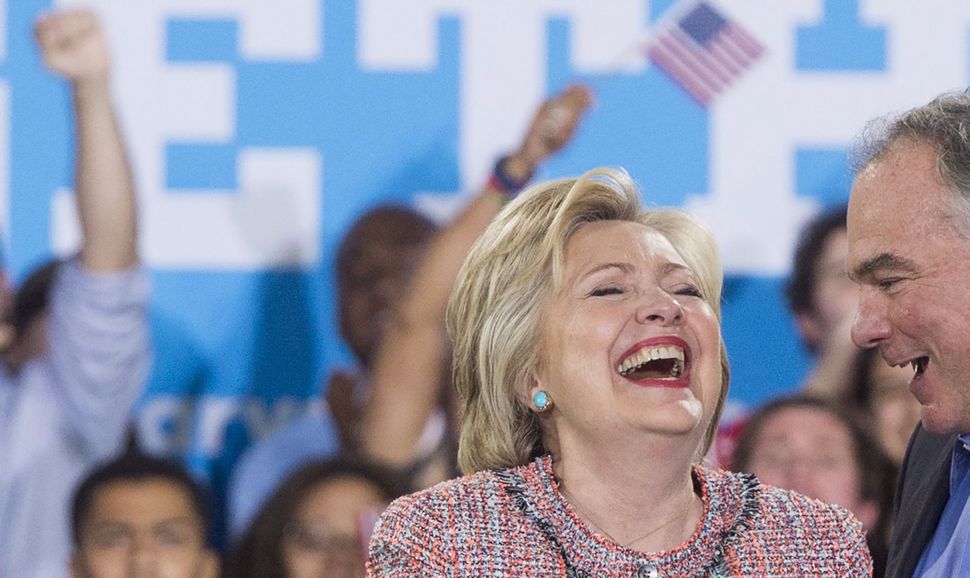 Tim Kaine is Hillary Clinton’s pick for Vice President, somewhat to the chagrin of the Democratic Party’s left wing and the — somewhat premature — excitement of Wikipedia. He has one of the longest records of service in politics among the people on Clinton’s shortlist, going back to his 1997 election as the mayor of Richmond, Virginia.

“He made himself very available to the Jewish community,” said Ron Halber, the executive director of the Jewish Community Relations Council of Greater Washington. “He took the Jewish community very seriously as a constituency,” even though it only represented a small portion of the Virginia electorate.

But Kaine is connected to the Jewish community in several other ways, as well. Here are five facts about Tim Kaine’s relationship to Judaism and Israel.

1. He supports a two-state solution even when others don’t.

Kaine is a member of the Senate Foreign Relations Subcommittee on the Middle East, Central Asia and terrorism, and held the chairmanship of the committee for two years. In March, he signed a letter, along with twenty-six other senators, urging President Obama to continue his support for the two-state solution. His predecessor as chairman of the subcommittee on the Middle East and terrorism, Senator Bob Casey of Pennsylvania, didn’t sign the letter.

Kaine’s decision to skip Bibi Netanyahu’s speech in Congress in March 2015 was also widely noticed throughout Washington. It was a clear message: Kaine did not agree with the timing of the talk, and Netanyahu’s perceived political motivations for delivering it before the Israeli elections.

“I’m not dumb, I knew not going to the speech might make some folks mad with me — there would be a political price, but I felt so strongly as a matter of principle that this was done in an entirely inappropriate way,” Kaine told the Forward.

Ron Halber, the executive director of the Jewish Community Relations Council of Greater Washington, said that it would be “a foolish mistake” to interpret Kaine’s move as being in any way unsupportive of Israel.

“He is keenly aware of the security challenges” in the region, Halber said.

2. He’s a religious Catholic, so he understands the imperatives, and difficulties, of observance.

Kaine is a dedicated, practicing Catholic who represents the Democratic party at the Senate’s weekly prayer breakfast on Wednesdays. He is also a member of a “reflection group,” along with six other senators, that holds faith-centered discussions. Though he does not personally agree with abortion, he sees a woman’s right to make decisions about her body as an important right, and does not support anti-abortion legislation. As a Catholic he’s used to being viewed as an outsider by white Protestants.

When Kaine found himself living in D.C., away from his wife, he decided to write a bible commentary on weeknights.

“He could’ve chosen to find other ways to address his loneliness that were either chemical or social in nature,” said Rabbi Jack Moline, the executive director of the Interfaith Alliance. “But he spotted the opportunity for deeper social reflection into a piece of scripture that particularly spoke to him.”

3. He brought hummus to Virginia.

During his time as the governor of Virginia, Sabra built the what is reportedly the world’s largest hummus factory outside Richmond, capable of producing 8,000 tons of hummus a month. Kaine was apparently directly involved.

“He’s the man who brought Sabra hummus to Virginia,” said Rabbi Jack Moline, the Executive Director of Interfaith Alliance. According to Moline, Kaine “wooed” the company to set up shop in his state.

Kaine authorized $350,000 from the Governor’s Opportunity Fund to help bring the project to fruition, beating out two other states for the privilege of being at the heart of American hummus production.

In 2006, during his first year as governor of Virginia, he hosted the first ever Passover Seder in the governor’s mansion. He is apparently part of a group of friends that rotates hosting the Seder each year, and that year it happened to be his turn. It also wasn’t his first time hosting — his home had been a slot in the rotating group for several years before his election.

Moline’s daughter and son-in-law met while working on Kaine’s campaign for governor of Virginia in 2005.

“If he hadn’t run for governor, I wouldn’t be a grandfather,” said Moline.