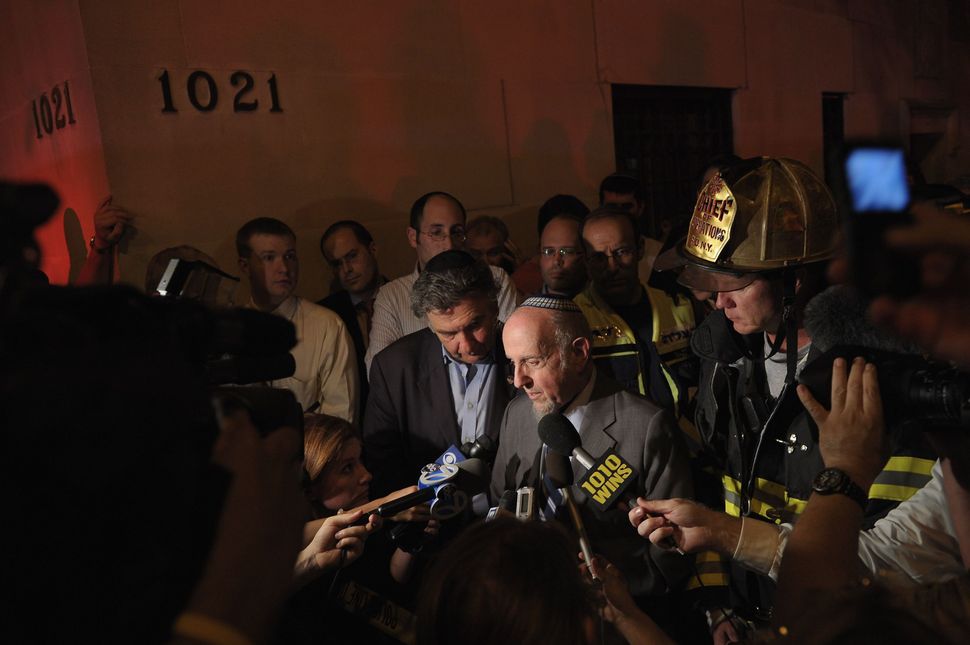 For Rabbi Haskel Lookstein it’s been a challenging summer.

A widely admired New York rabbi, Lookstein has faced down this over-heated season at the tail end of a long career as a beloved and respected spiritual leader among Manhattan’s elite. He has, among other things, long presided over Manhattan’s East Side synagogue Kehilath Jeshurun and the exclusive Jewish day school Ramaz.

Now 83, Lookstein finds himself suddenly at the center of controversy, yanked into the spotlight — and dragged through the mud — because of an increasingly conservative Israeli rabbinate and the presidential hopeful Donald Trump.

It was Lookstein who converted Trump’s famously now-Jewish daughter, Ivanka Trump, to Judaism prior to her marriage to Jared Kushner, an Orthodox Jew. And this, in turn, led to the invitation he received from Ivanka Trump to deliver the invocation at the Republican National Convention.

Outrage among Lookstein’s former students and congregants erupted almost immediately. Many pointed to comments Trump had made stereotyping Jews, his refusal to condemn anti-Semitic attacks on journalists who criticized him, and his belated and tepid disavowal of prominent anti-Semites who have endorsed him, such as former Ku Klux Klan leader David Duke. How could a force for Jewish ethics and moral clarity, one petition from former Ramaz students asked, back Donald Trump — a candidate who “openly spouts racist, misogynistic rhetoric”?

“Rabbi Lookstein,” one signatory, Miryam Kabakov, wrote when she signed online, “everything you’ve taught me, from preparing for my bat mizva (sic) to your weekly sermons… runs counter to everything Trump stands for.”

Lookstein, who declined to be interviewed for this story, withdrew from the convention within 48 hours because of the outrage. Not everyone thought the outage was merited.

“I don’t think his invocation would have constituted an endorsement of any candidate, or would have been in any other way wrong,” wrote Rabbi Avi Shafran, a spokesperson for Agudath Israel of America. But he also stressed, “I do not second-guess, and entirely respect, his decision.”

Others thought he could have used the platform to teach Trump a lesson. His blessing was to have read: “We thank you for our constitutional government that has created and fostered the American ideals of democracy, freedom, justice and equality for all, regardless of race, religion or national origin. Almighty God: We know that we are living in very dangerous times, when all of these blessings are threatened from without, by forces of terror and unimaginable brutality, and from within, by those who sow the seeds of bigotry, hatred and violence, putting our lives and our way of life at risk.”

For his part, Lookstein thought his invocation would have been “apolitical.” “The whole matter turned from rabbinic to political,” he wrote in an email to congregants, explaining the ordeal, “something which was never intended.”

This should have been enough national attention for a revered elder.

But it was, in fact, already the second flare-up of the season. Just days earlier, Israel’s Supreme Rabbinical Court rejected a conversion over which Lookstein presided, affirming a lower religious court’s ruling that the only way the convert could be legally married in Israel was if she converted again.

Hundreds rallied behind Lookstein, and the Jewish Agency for Israel’s executive chairman, Natan Sharanksy, slammed the decision. To not recognize Lookstein’s conversions, he said, “demonstrates why Israel is in danger of being delegitimized as a center of religious authority in the eyes of world Jewry.”

“His Orthodoxy is very open and very inclusive, the real Modern Orthodoxy,” said Rabbi Avi Weiss, founding rabbi of the Open Orthodox movement. “And yet he’s really tried to not burn any bridges with the establishment, and now that has caught up to him. I really feel for him.”

How can one man — in his 80s, no less — find himself at the center of not one but two fraught debates tearing through the Jewish world? Especially after a lifetime of leadership that seemed to float above Jewish religious and political divides?

Lookstein was born to be a religious leader. Congregation Kehilath Jeshurun has always been a family affair, ever since 1906, when the synagogue opened its doors on East 85th Street. Lookstein’s father and grandfather both helmed the congregation.

The young Lookstein learned what it meant to lead a community by watching his father in action. He would note “the attendance, the weather, my father’s sermon, and whether there was a special occasion,” Lookstein once told The Jewish Week. “We had 220 people, 270 on a Shabbos morning, depending on the sermon. The sermon topic was a major draw.”

Lookstein was ordained at Yeshiva University. After graduation he considered job offers for pulpits in Detroit and at a Sephardic synagogue in the Five Towns, New York, that would have involved him striking out on his own. He was also offered a job closer to home, as an assistant at the KJ synagogue.

When his father died in 1979, it was expected that Lookstein would take his position.

“We came back to the apartment, and my mother said, ‘Haskel, you’ll sit there; that was dad’s seat.’ A couple of minutes later, she said, ‘Well, you’ll finally have a nice office.’ In two comments she took away all the guilt at my assuming my father’s position,” Lookstein told The Jewish Week.

And while recent controversies may seem uncharacteristic, Lookstein has waded into politics before — and has not shied away from pushing the Orthodox envelope.

In 2001, Lookstein issued the first of many calls for a boycott of The New York Times, in response to what he saw as its skewed coverage of Israel. In a letter to The Jewish Week, he called for congregants and supporters to cancel subscriptions during the High Holy Days.

“Starting with the second intifada and during the editorship of Joe Lelyveld, I found that the Times, through its headlines and its lead paragraphs, frequently, if not consistently, presented the Palestinian version of the conflict without reflecting the Israeli version,” Lookstein recalled later in an interview with Columbia Journalism Review.

As a testament to Lookstein’s influence, Lelyveld requested a sit-down immediately. Lelyveld’s father, a Reform rabbi, and Lookstein’s father had been friends — so they connected on that level.

Lelyveld pushed back at criticisms, but agreed “that some of the headlines and stories were slanted and that some of my complaints were legitimate,” Lookstein recalled.

In 2009, Lookstein was one of three Jewish clergymen to participate in a post-inaugural service for President Obama. “I had originally decided to do it because I felt it was a civic duty to honor the new president of the United States,” Lookstein said at the time.

But the Rabbinical Council of America, one of the world’s largest groups of Orthodox rabbis, took issue with the rabbi participating in the service, because the it was held in a church.

Lookstein offered his rationale: “It is only right for the Orthodox community to be supporting the president in a visible way when he is being supported by representatives of the Conservative and Reform movements.” With these kinds of gestures, Lookstein cemented himself as a liberal Orthodox voice and prominent figure of the Modern Orthodox movement.

“He’s a role model for many rabbis for how to build and nourish community,” said Ysoscher Katz, a prominent younger rabbi in Modern Orthodoxy, in an interview with the Forward. “Being a Ramaz graduate is seen by many as a badge of honor, in no small part because of his vision of a robust, intellectual, and activist Modern Orthodoxy.”

Lookstein’s curriculum included a course titled Jewish Sexual Ethics, a touchy subject for many Orthodox Jews. The rabbi said he wanted to be open to all issues while maintaining an Orthodox approach.

“Nowhere does that get more difficult than in the area of sexual ethics,” he told The New York Times.

For a revered figure, Lookstein still finds time to enjoy lighter activities. He recalled learning how to foxtrot and rumba as a high schooler, and still plays a weekly tennis match with close friends Alvin K. Hellerstein, a federal judge, and Michael Shmidman, another rabbi, as highlighted in a recent New York Times feature. Both men are also in their 80s.

Lookstein said that years ago — before he became ensnared in American Jewish politics and looked to as a figurehead, with all of his actions freighted with significance — he imagined another career path. “I wanted to play for the Yankees,” he said, “until I realized they play on Saturdays.”