At a trendy community space in Brooklyn, a controversial 9/11 conspiracy theorist spoke Wednesday to a group of around two dozen listeners about the “Zionist war agenda” that he says was behind the attack 15 years ago that killed 3,000.

The crowd filed past a sleek bar serving drinks, some carrying Palestinian flags and flyers that read, “9-11: Do You Believe? Or Do You Question?” Some said they had come to the author Christopher Bollyn for answers.

“The Zionist war agenda waged by the U.S. was the primary reason for 9/11,” Bollyn told the crowd at the Brooklyn Commons, a “movement building space” in the gentrifying Boerum Hill neighborhood. Bollyn led the audience through a plodding, footnoted slide show which lasted more than two hours. 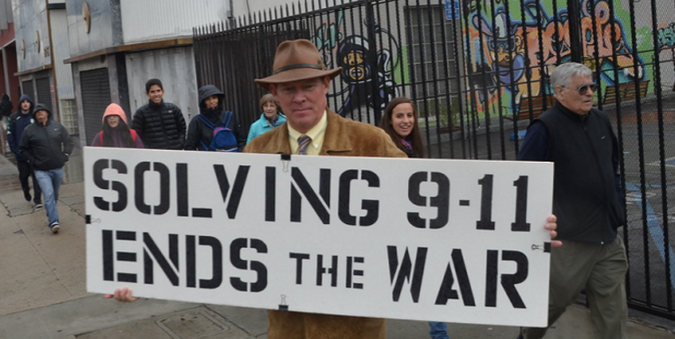 Outside, though, a small protest was brewing. “Anti-Semitism and the Left Don’t Mix,” read one man’s sign. “Another Anti-Zionist Jew Against Anti-Semitism” read another.

“I’m here as someone on the left that thinks its important that the far-right not make common ground with leftist spaces,” said Ari Greenberg, who called himself an anti-occupation activist. “As a Jewish person, I’m slow to cry anti-semitism. But I feel compelled to call it out when its in front of me.”

“We have to make it clear that [opposing Israeli policy] doesn’t make you anti-Semitic,” he said. “The line in the left is clearly being blurred.”

Heated debate between a protester and an attendee outside of @BrooklynCommons’ Christopher Bollyn event right now pic.twitter.com/FKWynJsKhi

Intermingled with Bollyn’s acolytes and his critics, there were also a handful of curious visitors, people who move in activist circles, are critical of Israeli policy and have serious questions about America’s foreign policy.

Carolina Sitrin, who was raised Jewish and taught Hebrew classes for 14 years said she had come to hear Bollyn speak. She wasn’t familiar with Bollyn’s views, but said she wanted “to know what really happened.”

“I have strong doubts about what the government says,” she said. “So I want to hear him.”

Inside, Bollyn made his way through his talk, showing what he believes are patterns showing that Israelis and Zionist Jews have been key people at every point in the 9/11 story.

“When you look at the 9/11 crime, the creation and promotion of the war on terror and the cover up — the key people are Zionist or Israelis,” he said earlier. “Why are these high-level American Zionist and Israelis covering up the crime?”

Protestors made their way inside, interrupting the ticketed event. Though a handful of protestors had signs identifying themselves as “Anti-Zionists” Bollyn would call the protesters a “Zionist mob.” Two protesters were forced to leave and the police were later called, though no arrests were made, according to social media reports.

The event, Bollyn later wrote on Facebook, was “the most terrorized and violent” out of a series of talks he had recently given. He was, he wrote, thankful to the NYPD for protecting him from the “Zionist mob outside the venue.” The appearance of Bollyn, whom the Southern Poverty Law Center brands a “raging anti-Semite,” brought a round of condemnations from the mostly leftist groups that work out of the Commons space. Notably, Jewish organizations that oppose the Israeli occupation — eager to draw a firm line between their criticism of Israel and Bollyn’s broader claims of conspiracy — moved swiftly to denounce Bollyn and called for the venue to cancel his appearance.

Jews for Racial and Economic Justice, Jewish Voice for Peace and IfNotNow each issued individual statements calling on the Commons to pull the speaker. But Melissa Ennen, who founded the space in 2010, stuck by the decision to host Bollyn, saying the Commons was never meant to be a “cozy space” only for progressives.