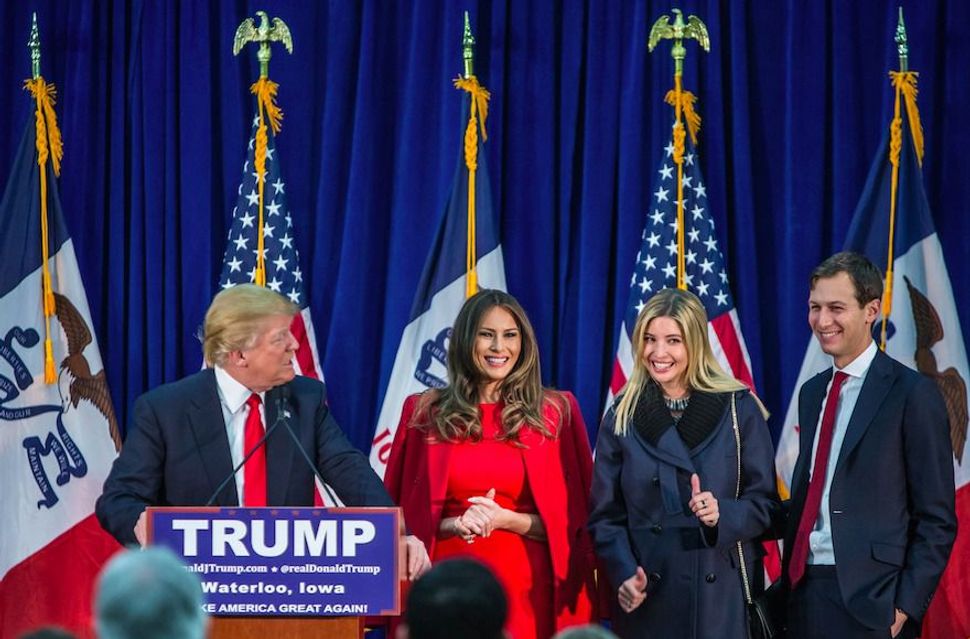 Jared Kushner broke his usual Shabbat routine to help his father-in-law, Donald Trump, through a crisis sparked by the release of blockbuster tapes showing the presidential candidate lewdly discussing women.

Kushner is an observant Orthodox Jew who normally does not work during Shabbat. But as the New York Times reported, he was among a group of close Trump advisers who gathered at Trump Tower in Manhattan on Saturday to devise a comeback strategy for the struggling candidate.

Trump’s daughter Ivanka, who converted to Judaism, was not at the meeting.

The informal meeting in Trump’s Fifth Avenue skyscraper followed the release of a decade-old video of Trump talking about making unwanted sexual advances on a married woman on Friday.

In the aftermath of the video, almost 50 Republican lawmakers officially un-endorsed their presidential nominee.

The group discussed several strategies to react to the fall-out. According to the New York Times, one idea was that Trump and his wife Melania should do a joint television interview, similar to the one the Clintons did in 1992 after after Gennifer Flowers claimed that she had had an affair with Bill.

Other topics included preparing for the St. Louis debate and a discussion about whether Trump should talk about Bill Clinton’s past.

Shortly before the debate started on Sunday, Trump held a press conference with four women who claim to be victims of the Clintons, including three women who accuse Bill Clinton of sexual assault or harassment.

According to several news reports, Jared Kushner devised a plan to have the four women sit in Trump’s family box during the town hall-style event, but debate officials nixed it in the last minute.

“We were going to put the four women in the VIP box,” Giuliani, who represents Trump in debate negotiations, told the Washington Post. “We had it all set. We wanted to have them shake hands with Bill, to see if Bill would shake hands with them.”

Officials for the commission of presidential debates warned the Trump campaign that they would have security officers remove the women from the box, so they were seated with the general audience.

Kushner has been a vital adviser for his father-in-law, which led the New York Times to describe him as Trump’s “de facto campaign manager.”