Is Jared Kushner the ‘Court Jew’ of Donald Trump’s Realm? 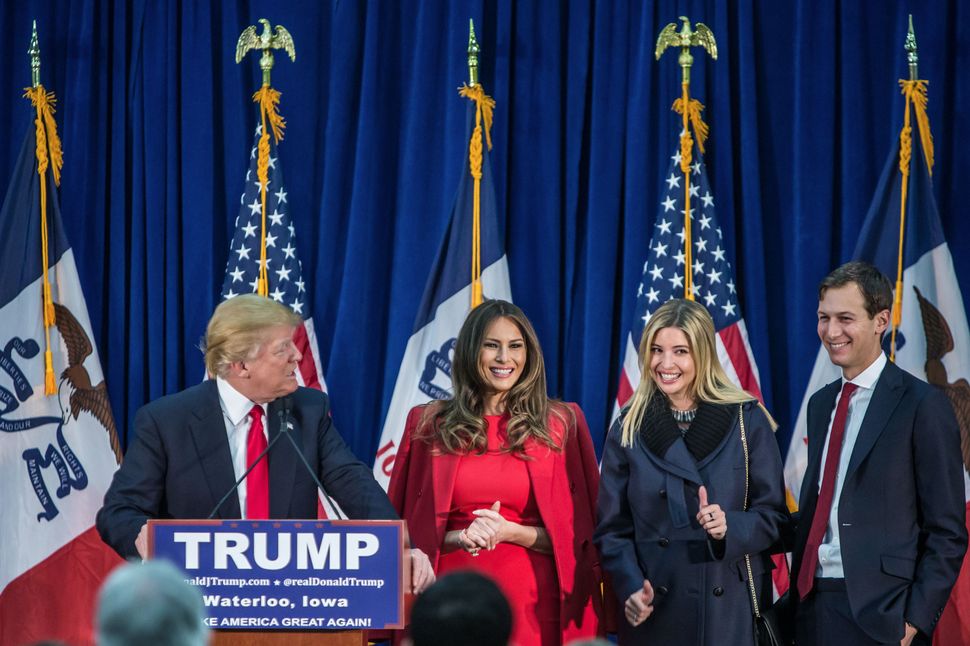 At His Side: Jared Kushner rallies for Donald Trump in Iowa. Image by Getty Images

The Leader has everything: money, land, power. There’s just one thing missing, the support of the Godly. The Leader has never been big on religion. In fact, he’s a little concerned that many of his Christian supporters are openly anti-Semitic. That’s a problem, since the Leader owes the Jews big time. Many of his father’s biggest land deals — and the Leader wouldn’t be the Leader without his father — were made with the Jews.

So the Leader comes up with a brilliant plan. He’ll marry his beautiful daughter to Hebrew nobility, a real Prince of the Jews. That way, no matter how egregiously anti-Semitic he and his followers might appear, he can always say — but look at my son-in-law, you don’t get more Jewish than him!

If this story sounds familiar, then you’re pretty well up on the story of Charlemagne. It was in the late 8th century that Charles the Great, more commonly known as Charlemagne, made good on his father’s promise to give the Jews of southern France the kingdom of Septimania, to thank the Jews for betraying their Muslim neighbors and opening the gates to the Franks. Charlemagne insisted, however, that the Jews of Septimania send for a Prince from the House of King David to travel to the south of France and rule over the Kingdom. Legend had it that Jesus was descended from King David, and Charlemagne was keen to marry his daughter to a Jew who would not only cement the support of the Jewish people, but make his grandchildren the legitimate sons of the Son of God.

There may be many reasons why Donald the Great married his daughter Ivanka to a modern prince of the Jews, Jared Kushner. Some of them may have nothing to do with Charles the Great’s instincts for political protection, dynasty building, anti-Muslim sentiment and prime shoreside property. In the course of his father-in-law’s campaign for President, Kushner has done what Court Jews have done over the centuries — rationalized insults for the sake of survival. He has played his heritage as a grandchild of a Holocaust survivor as, well, a Trump card against those who have attacked Donald the Great for his unwillingness to distance himself from anti-Semitic supporters and their attacks on his opponent (the mother-in-law herself of a nice Jewish boy) that make use of historically anti-Jewish images.

Between The Charles and The Donald, there have been scores of famous anti-Semites who kept a Court Jew close at hand. Because of the Catholic injunction against money-lending, Isabella and Ferdinand of Spain turned to Isaac Abravanel to finance their 15th-century wars against the Muslims. When the wars were over and Ferdinand and Isabella decided to clear Spain not only of the Muslims but also of Abravanel’s Jewish brethren, Abravanel sent his patrons more silver in the hope that they might change their minds. They didn’t.

The German Jewish banker Joseph Süss Oppenheimer was one of the more famous Court Jews of the 18th century, serving as banker for Duke Karl Alexander of Würtemmberg until the death of his protector. At that point the Jew Süss, as he was later immortalized on page, stage, and screen, was hanged and left in an open cage in the public square of Stuttgart for six years.

As the Republicans slouch towards Cleveland, it is worth remembering another coronation in Rome. On Christmas Day 800 CE, with his daughter and her Jewish husband, the new King of Septimania, at his side, Charlemagne entered St. Peter’s Basilica, knelt on the stone floor, and had himself crowned Holy Roman Emperor. By the end of the century, Charlemagne and his Empire were dead, destroyed by infighting and a bad case of Vikings. And Charlemagne’s son-in-law — the Jewish King of Septimania — had long since been forgotten.

Jonathan Levi is the author of the novels “A Guide for the Perplexed” and the recent “Septimania.”

Is Jared Kushner the ‘Court Jew’ of Donald Trump’s Realm?