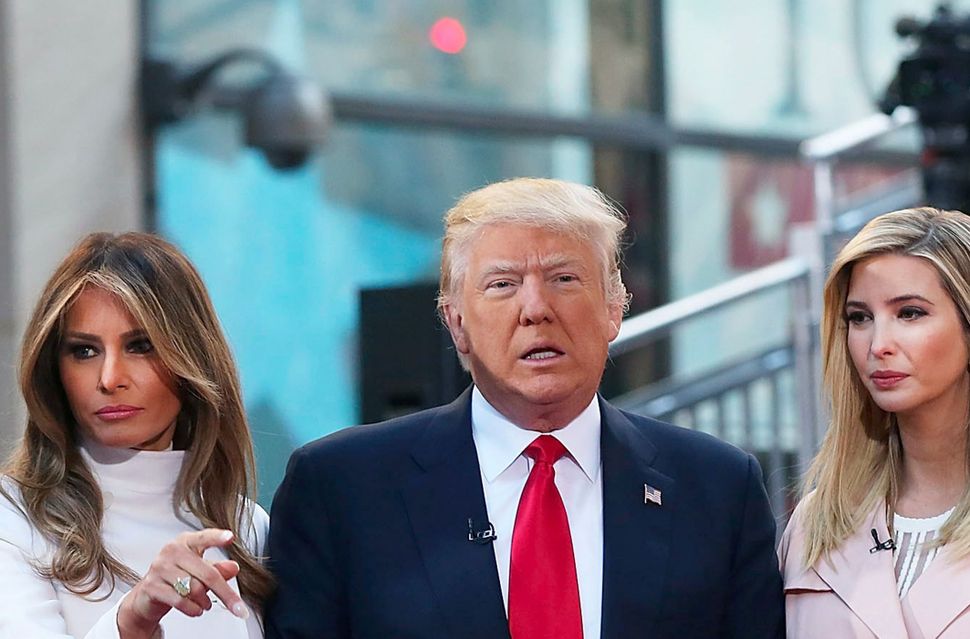 What is it about Ivanka Trump? If Donald’s daughter were the one running for president, there would probably be far fewer Republicans declaring “Never Trump” as we watch the election unfold like a slow-motion train wreck. She is, simply, everything her father is not. Soft-spoken, a thoughtful listener, a self-proclaimed feminist, naturally beautiful and gentle — especially in contrast to her father’s brash, bombastic showmanship.

In The Federalist (where I am a senior contributor) Mary Katharine Ham puts it best: “Ivanka is a natural in the art of Kate Middletoning — being damn near perfect and likable, especially to women, even when her immense beauty and privilege have the potential to make such displays grating.”

Which is why so many fans and admirers of Ivanka, myself included, are increasingly wondering: When is it going to be enough for Ivanka? When will it come to a point where even Donald’s daughter can’t defend him any longer?

In a recent article in The Atlantic, Alex Wagner asks just that. How can a self-proclaimed feminist stand idly by as her father, a presidential candidate, debases not only women everywhere, but also Ivanka herself? One of Donald’s ultimate “compliments” about Ivanka is that he would date her if she weren’t his own child. If any other father in America made a similar public statement about his teenage daughter, he would (justifiably) be subject to a visit from the local division of Child Protective Services. It’s just not something a father says about his daughter — much like Donald’s compliments about the future breast size of his then-one-year-old daughter Tiffany.

Ivanka’s entire brand revolves around empowering women to be the ultimate multitaskers, taking up the mantle of Sheryl Sandberg and helping women who want to make it in corporate America “lean in.” Wagner writes, “What is undeniably true is that there is no room even in Ivanka’s brand of hyper-efficient, nonconfrontational feminism for the piggish antics and antiquated, un-hashtaggable gender tropes embraced by her father. Put another way: If the tables were turned and Donald Trump worked for his daughter, he would have been fired long, long ago.”

What Wagner wrote of Ivanka’s feminism could just as well be said of her Judaism. How long can Ivanka, herself Jewish and the mother of three beautiful Jewish children, stay silent about the vocal anti-Semitic contingent in her father’s base? Last October, I was one of the first journalists to take note of the phenomenon in these pages, asking, “Why Won’t Donald Trump Stand Up to His Anti-Semitic Fans?” Seven months later, I’m still asking.

Since that piece was written, Trump has retweeted more blatantly anti-Semitic accounts and selected a delegate with white nationalist ties to represent his campaign in California. In the run-up to the New York primary, Ted Cruz could be found in Brooklyn baking matzo with some Chabadniks (and me), but Trump was nowhere to be seen making similar outreach attempts to the Jewish community. The closest Trump came were his appearances at events like the Republican Jewish Coalition’s annual gathering late last year, when he joked that he wasn’t going to get the support of those present because he wasn’t interested in taking their money. A very unamused crowd eventually booed the then-longshot candidate.

Now that more mainstream and liberal reporters are on the receiving end of the same deluge of tweets, messages and even calls that conservative Jews have been experiencing for over seven months, the wider media is finally beginning to pay attention. The New York Times’ Jonathan Weisman was recently subjected to a wave of hate, and before that, Julia Ioffe was targeted for a balanced profile she did of Melania, Donald’s wife, for GQ. Both incidents received a great deal of coverage and finally drew the attention of Jewish groups like the Anti-Defamation League.

Many have said that the Trumps aren’t responsible for their fans. Even ignoring Trump’s racist rhetoric against Muslims and Mexicans and his encouragement of violence at his own rallies, this is demonstrably false.

During her primetime interview with Trump, Fox anchor Megyn Kelly pressed the candidate several times on what he thinks about his online army of supporters who seek to destroy anyone on social media who dares to speak ill of the candidate. Kelly herself was a prime target because of several tough questions she asked of Trump during early GOP debates. After dancing around the question, as Trump has been known to do whenever pressed about endorsements from the Ku Klux Klan’s David Duke, he told Kelly, “But it is in response to something that they did.” Got that? Journalists like Weisman, Ioffe and countless others had it coming to them from Trump’s anti-Semitic and self-proclaimed “alt-right” army, because they dared to challenge the presumed nominee.

In an interview with DuJour magazine, Melania went even further, claiming that Ioffe “provoked” the hate she received by writing about the future first lady in a less than totally flattering manner. The feedback Ioffe received included voice mailboxes full of Hitler recordings, and tweets of Photoshopped pictures of Ioffe in concentration camp garb. Ioffe isn’t the first journalist covering Trump to file a police report because of threats received while doing her job.

By claiming that journalists “provoke” the violent animus of Donald’s army of online supporters, the Trumps have done nothing but encourage this behavior.

The fact that even Ivanka, an outspoken and widely admired Jewish woman, hasn’t spoken out about this pervasive anti-Semitism and sexism is perhaps the most outrageous element here. It portends badly for the future of the campaign’s messaging, and, ultimately, for the safety of American Jews.

Even with a son-in-law in journalism (their daughter’s husband, Jared Kushner, is the owner of The New York Observer), the Trumps have yet to denounce threats made against journalists. It seems unlikely that they plan to, given the Trumps’ inability to fight for anything but their own naked ambition. And that portends badly for freedom of the press in this country.

After all, if members of the Trump family won’t stand up against anti-Semitism online when their supporters dish it out against Jews and journalists, and in particular Jewish journalists, we shouldn’t hold out any hope that their response would play out differently in real life.

Bethany Mandel writes on politics and culture, usually from a conservative perspective. Follow her on Twitter @bethanyshondark