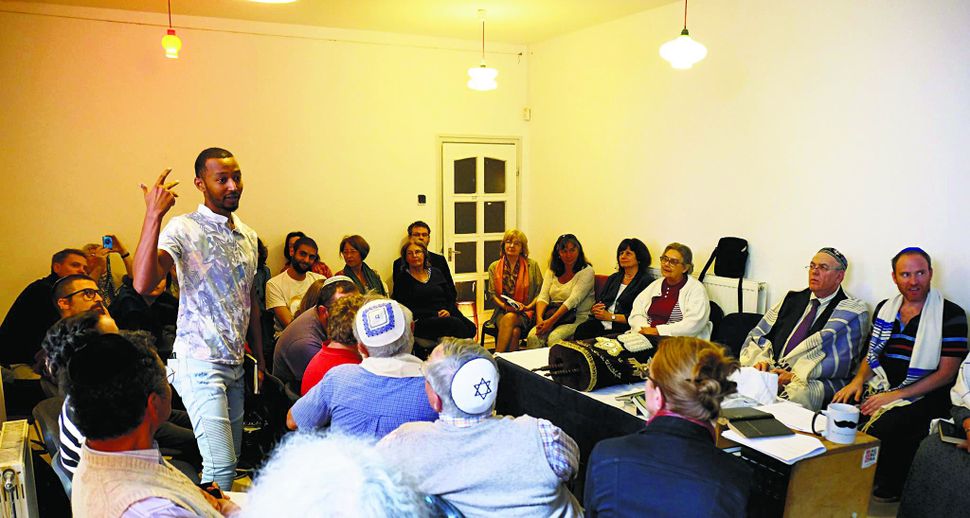 Welcoming the Stranger: Mussa Kilam, an Eritrean immigrant, tells his story to listeners at a ‘Jewish Solidarity with Refugees’ event at Auróra, a popular Budapest gathering place for young Jews, on October 1. Image by Mindenki Joga Radio Show

In America, the Facebook post announcing a Jewish social event focused on human rights might seem innocuous, if a bit cute: “No One Is Illegal: Concert, New Klezmer Disco, Syrian Dance Lesson,” the invitation to a fundraiser for refugees read.

But it’s a significantly more risky proposition in a country led by a right-wing prime minister who inveighs regularly against Muslim refugees as a toxic tide engulfing the nation. The event on February 6, was one of many held at Auróra — a popular Budapest gathering place run by an organization of young Hungarian Jews. As Hungary grapples with the impact of an unprecedented refugee crisis — and the government’s own vitriolic anti-refugee campaign — young Budapest Jews have come to the forefront of the fight for refugees’ rights.

In a way, the issue has become a focal point for an assimilated community whose members have few things in common. The estimated 120,000 Jews still in Hungary live mostly in Budapest, and the vast majority of them have no connection to Jewish religious life or to formal Jewish organizations. It is common for Hungarian Jews to put up Christmas trees, and many have never attended a High Holiday service.

But there are two common traits most Hungarian Jews share: fear of persecution, and a strong interest in helping protect fellow minority and marginalized groups in Hungarian society.

“The level of solidarity in Jewish society — towards I think not just the Jewish people, but also toward other oppressed groups or other minorities — is much higher than in other groups,” said Ádám Schönberger, 36, the son of a local rabbi and the head of Marom Budapest, the organization of young Hungarian Jews that operates Auróra.

“I think this is rooted in the Jewish community because of the religious teachings and also because of the historical experiences” of persecution and wandering around Europe, he explained.

Hungarian Jews have a long history of grappling with state-sponsored discrimination: Europe’s first interwar anti-Jewish law was introduced in The Middle East refugee issue has become a focal point for an assimilated community whose members have few things in common.

Hungary in 1920. During World War II, Hungary’s government sided with Nazi Germany. In 1941, the Hungarian government sent more than 100,000 Jews into forced labor, while 15,000 were sent to Ukraine, where they were murdered. Later, in 1944, Hungarian authorities carried out the deportation of over 400,000 Jews to Auschwitz-Birkenau. In part due to this legacy, Hungary’s Jews tend to be very sensitive to any government policies that target or disadvantage minorities.

Today’s young Hungarian Jews are mostly young professionals in their 20s and 30s who came of age following the fall of the Iron Curtain — the grandchildren of Hungarian Holocaust survivors. They are more outspoken than their elders, and have been taking a leading role in providing humanitarian assistance to refugees and in publicly advocating against the policies of Hungarian Prime Minister Viktor Orbán.

Hungary’s prime minister has built a fence to prevent refugees from entering Hungary, while setting up a unit of so-called “border hunters” to target refugees along the country’s borders. Human rights groups have accused the government of using violence against refugees while limiting the ability of people arriving at Hungary’s borders to request asylum. “I don’t think of myself as a very religious Jew, but… the greatest mitzvah is helping people without expecting anything in return, people who can’t give anything in return… and we helped tens of thousands” said András Léderer, 32, who has been active volunteering to help refugees since the beginning of the crisis.

Added Léderer, who currently works on advocacy projects at the Hungarian Helsinki Committee, the only organization providing legal aid to refugees arriving in Hungary, “Trying to figure out what it means to be a nonreligious Jew in Eastern Europe with the history of the Holocaust that runs in your family in 2016 is maybe about things like this, how to help people who are forced to the fringe… especially if, as in Hungary, the state … is not even providing basic humanitarian needs, like water.”

Léderer’s reference was to a policy imposed by Orbán in 2015, at the height of the refugee crisis, as hundreds of thousands fled government bombs and jihadist rebel violence in Syria, and violence and poor conditions in other countries. Those fleeing headed to Greece from Turkey, and from Greece they went northward toward Hungary, hoping to reach Austria and Germany. It was then that Orbán made a decision not to provide any aid or services to the refugees. Refugee families slept in open fields, with the government initially declining to provide so much as mobile toilets.

Schönberger remembers walking at the time into Budapest’s Keleti train station, where thousands of refugees were stranded, and recognizing many faces from the Jewish community in the crowd of volunteers who showed up spontaneously to bring food, water and clothing for the refugees. Marom temporarily suspended its programming and turned its offices into a shelter for Syrians and others.

While solidarity with persecuted groups is found among most Hungarian Jews, young Budapest Jews have been much more active than members of the older generations and the official Jewish community leadership in standing up for refugees’ rights.

It was their parents’ generation that grew up under communism, and this may help explain why they have, for the most part, adopted an attitude of not challenging the authorities directly.

While small youth organizations attempt to survive on donations, and with help from volunteers, large organizations — which face the costs of maintaining synagogues and, in some cases, cemeteries and old community property — rely on an extensive system of government subsidies.

However, both the Federation of Hungarian Jewish Communities, which is known under the acronym MAZSIHISZ, and the Unified Hungarian Jewish Congregation — known as EMIH, an affiliate of Chabad-Lubavitch — decided during the height of the crisis that as Jewish institutions they had a responsibility to provide refugees stranded in Hungary with humanitarian assistance.

“We brought medicine to the Keleti and Nyugati train stations, and on several occasions bread, milk and other food,” said Rabbi Slomó Köves, executive rabbi of EMIH.

Despite this assistance, a gap emerged between the large, official Jewish organizations and many of Hungary’s Jews, especially when it came to the community’s younger members. Some young Jewish activists resented MAZSIHISZ’s refusal to make buildings at its disposal available to house refugees temporarily.

The federation’s participation in efforts to help refugees was “very limited,” Schönberger said. “When I turned to MAZSIHISZ to do something… they said yes of course we should do something, but it’s hard because there’s the government supporting us.”

MAZSIHISZ’s proponents, however, point to a fundraiser and food collection drive the group spearheaded in September 2016 as evidence of its involvement in the refugee cause.

Pressures within the Jewish community for more direct action, and for open criticism of the government, grew as Orbán embarked on a large-scale public relations campaign against refugees, culminating in a highly controversial October 2 referendum.

The referendum, whose wording was widely criticized as distorted, asked Hungarians, “Do you want the European Union to be able to mandate the obligatory resettlement of non-Hungarian citizens into Hungary even without the approval of the National Assembly?”

As the government’s referendum campaign turned increasingly xenophobic in the weeks leading up to the vote, the official Jewish leadership — under intense grassroots pressure — felt it had to say something. In October, the president of MAZSIHISZ, András Heisler, lamented, “The public discourse on the migrant issue has crossed the line into hate speech.” But Jewish leaders still did not take a direct stance against the government’s policies.

“The Jewish community is especially impacted by Islamic fundamentalism,” Köves said. “I understand those who wanted to vote” with the government. But he said he also understood those boycotting the vote because “this campaign used such ugly and in many cases oversimplified slogans.”

Some Hungarian Jews took a clear public stance against the government. On the day before the referendum, several small Jewish groups — including Marom and the Reform-affiliated Sim Shalom Progressive Jewish Congregation — held a joint service in solidarity with refugees. Opposition parties and civil society organizations, meanwhile, urged citizens either to boycott the vote or to invalidate their ballots by checking off both “yes” and “no.”

Symbolically, in Budapest’s seventh district — the historic Jewish quarter that served as the ghetto during World War II, where some assimilated and traditionally observant Jews still live — only 28.34% of eligible voters cast valid ballots in the referendum, one of the lowest rates in the country.

One Jewish voter turned in an invalid ballot decorated with apples and honey to protest the government’s refugee policies,. A photo of the ballot, which also said “Shana Tovah,” went viral.

For many young Jews, the issue of refugees intersects Hungary’s other challenges — from increasing government control of the media to unofficial government support for anti-Semitism.

Over the past few years, hundreds of thousands of Hungarians of all backgrounds have left the country, many for the promise of better opportunities in places like the United Kingdom. Young Hungarian Jews thus have the option of moving to Israel or seeking a new life in Western Europe.

It is unclear how many have already left, but right now, those who have stayed are opting to actively struggle for a better future not just for the Jewish community, but for other minorities as well.