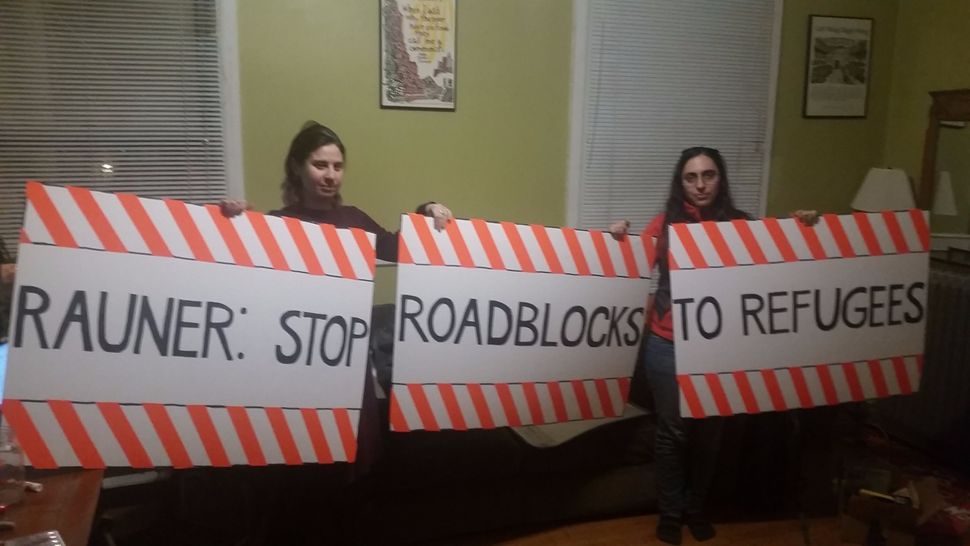 “East Aleppo is about to fall,” said Eli Massey of Jewish Voice for Peace, one of the march’s sponsors. “It’s important for Illinois and the United States to accept Syrian refugees and invest in refugee services, given the general geopolitical context; it’s especially important now.”

That could be a harder sell following the Tuesday truck attack in Berlin on an outdoor shopping market that left 12 dead and the emergence of a Tunisian asylum seeker as the prime suspect. But organizers made no change in their plans after the attack.

According to Massey, rally organizers decided not to speak about the events that took place earlier this week in order to concentrate on their message of supporting Syrian refugees. He said he’d been asked several times about addressing what had happened in Berlin, and also about the assassination of Russia’s ambassador to Turkey in Ankara by a Muslim Turk in apparent protest of Russia’s bombings of Muslim rebel strongholds in Syria. But Massey said he found it curious that no one asked him if he was going to speak about yet a third incident this week: Monday’s shooting in a Zurich mosque, in which three men were injured.

Swiss investigators say they have yet to determine the motives of the Zurich shooter, who appeared to have killed himself after the attack. But they believe he was also the murderer of a man with South American roots whose body was found in a Zurich playground Sunday morning. They have so far declined to classify the mosque shootings as a terrorist attack aimed at Muslims.

Despite this uncertainty, Massey said, “It feels important to mention [the Zurich] attack in the same breath as [Berlin or Ankara] to contextualize a broader climate of Islamophobia, xenophobia, anti-Arab sentiment, and racism.”

Massey also stressed that in Berlin the responsibility of the Tunisian suspect, who remains at large, and the motive for the killing have yet to be proven. The quick jump in assuming his guilt and his motive, he said, “only serves to further reinforce” the protest’s point about Islamophobia.

Added Tarek Khalil, a member of American Muslims for Palestine who spoke at the rally, “Our message is an anti-hate, anti-racism, anti-Xenophobia, anti-Islamophobia message. The religious, ethnic, racial makeup of an individual perpetrator does not diminish such a message.”

The Chicago march is part of a national Chanukah action organized by JVP in more than a dozen cities across the country. In Chicago, the group was joined by several Muslim organizations, including the Council on American-Islamic Relations, the Muslim American Society, and American Muslims for Palestine.

Following the November 2015, attacks on Paris, Rauner was one of more than 20 Republican governors nationwide who announced that his state would temporarily stop accepting Syrian refugees as a security measure against domestic terrorism.

Khalil acknowledged that the protest should have happened a long time ago. He also noted that Rauner doesn’t have any actual power to prevent immigration to Illinois.

In 2016, there were no changes in the number of Syrians immigrating to Illinois, said Jims Porter of RefugeeOne, a Chicago resettlement agency. The only difference is that the governor’s announcement led to a flood of protest donations.

The governor’s office did not respond to a request for comment.

Still, Khalil and Massey say that Rauner’s words do have consequences. “A sentiment can gain political traction and translate into policy,” said Khalil. The governor, he pointed out, still has the power to restrict state funding for services for refugees, such as medical and housing programs, though Rauner has not, in fact, done so.

Massey said the governor’s refusal to welcome refugees from the Middle East echoed how the United States refused to admit Jews fleeing the Holocaust on the suspicion that they were German spies and a national security threat. “It’s very likely,” he said, “that if Illinois had opened its doors wide and stepped up and invested, we could have saved Syrian lives.”