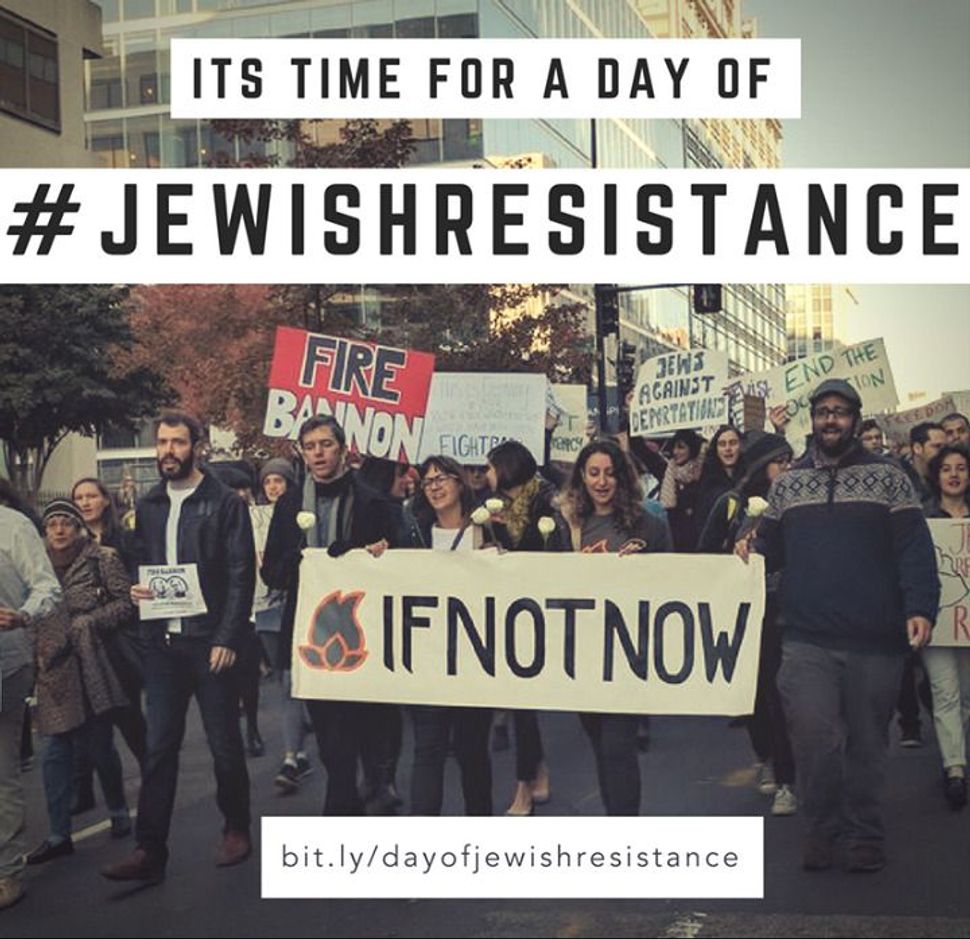 Image by Courtesy of IfNotNow

Holding a banner bearing the IfNotNow logo and #JewishResistance, the young demonstrators had marched down 59th Street to demand that the Jewish federation publicly denounce what they view as the white supremacist views of Steve Bannon, president-elect Donald Trump’s adviser appointee.

The march was part of a coalescing of various groups of progressive young Jews, moved to action by Trump’s election and his subsequent appointments of Bannon and others criticized for racist views. The developing movement calls itself the Jewish Resistance, and targets both Trump and his cronies as well as what it says is silence on the part of the American Jewish establishment in the face of dangerous racism and bigotry.

“This has absolutely been a galvanizing moment for young Jews,” said Stosh Cotler, CEO of Bend the Arc, a group which works on issues like voting rights and criminal justice reform, and has nearly doubled in size just since the presidential election. Some 40,000 new people have joined as members and hundreds have offered to volunteer significant time to Bend the Arc’s effort to counter what Cotler says may be “a slide toward fascism” on the part of the president-elect and his appointees and nominees.

It is happening at a time when studies and reports show that federations and other establishment Jewish organizations are struggling to engage significant numbers of young adults in their work.

Hundreds of IfNotNow members — mostly young, millennial Jews — marched this week in five cities making the point. In Philadelphia a line of police officers on bikes blocked their way into the Jewish federation building, said Yonah Lieberman, an IfNotNow organizer. In Chicago, federation staff locked the doors as soon as IfNotNow members approached, Lieberman told Haaretz, leaving the crowd out in below-freezing weather. At the San Francisco Bay Area Jewish federation, protesters were ignored, he said. And in Washington D.C. they held a press conference in the lobby of the Jewish Federations of North America building there, before being forced out by security guards.

The new opposition is also spurring ad-hoc efforts by synagogues and individuals to ally with immigrant, Muslim and other vulnerable groups, and actively lobby against some of Trump’s nominees and promised policies.

Jewish federations, which exist in most Jewish communities to provide social services and raise money for Jewish education and Israel, are the focus of IfNotNow’s efforts. The federations “are the most powerful and largest Jewish institution in this country. They have a responsibility to be our leaders in this time of moral crisis,” said Lieberman.

The concern: Racism in the mainstream

The concern, say Lieberman and allies in this Jewish Resistance, is that Bannon and other Trump nominees and appointees are bringing racism into the mainstream. And that by not naming and opposing it, Jewish organizations are providing a kind of kosher seal of approval even as “Bannon is a direct threat to the Jewish and other marginalized communities,” said Lieberman.

Spokespeople for both the New York Jewish federation and the federation umbrella group, JFNA, declined to comment.

Some take issue with the young movement’s adoption of the term “Jewish Resistance,” which hearkens back to efforts of Jews against Nazi oppressors during the Holocaust. “It’s an abuse of the terms Jewish and resistance,” said Abe Foxman, a child survivor and ADL national director emeritus. “We’re not at war. This is not an underground movement. It’s nonsense. Respectfully, it’s nonsense,” he said.

Foxman also took issue with their focus on federations. It is “misplaced, misdirected energy,” he told Haaretz. “This is not about Trump. It’s about America. America needs to be fixed – we need to fix civility, strengthen our democracy. It’s not a Jewish issue, it’s an American issue. Yeah, he had a role in the election in that he legitimized some of the ugliness that exists, but he didn’t create it. We need to enlist him in the fight, not fight him. To resist him and fight him is immature.”

Phone calls and negotiations ensued between Robin Boehler — a past president of the Seattle Jewish federation — working with her daughter, Lindsay O’Neil, and JFNA’s heads. O’Neil, 35, has been involved in the Seattle federation for several years. Boehler, 60, is a longtime lay leader of a variety of Jewish organizations.

O’Neil helped set up the Seattle federation’s program for Jews in their 30s and 40s, helped lead the organization’s largest women’s event and is on her Jewish community center’s diversity and inclusion committee. In short, O’Neil is a poster child for Generation X and millennial involvement with the Jewish establishment. The Seattle federation thinks so, too, and honored her with its young Jewish leadership award two years ago.

Soon after Trump was elected president she, with her mother, sisters and a handful of others started a Facebook group called Jewish Community of Action Against Hate. It has close to 3,300 members and posts daily action items. This week they asked members to urge their senators to oppose the nomination of Jeff Sessions as U.S. attorney general. Sessions is the Alabama Republican senator on record as opposing civil rights legislation enforcement.

The mother-daughter pair also reached out to every large and midsize Jewish federation in the country to try to get them to issue a statement about Bannon, O’Neil said, with mixed results.

The number of Jewish federations and other Jewish agencies to call out Bannon’s appointment by name can be counted on a few fingers. A few in statements more broadly condemned the rash of hatred and violence against Jews and other minorities that has ballooned since the election.

One group they haven’t heard back from is the Museum of Tolerance, whose leader, Rabbi Marvin Heir, will offer blessings to Trump at his inauguration.

This week, two months after the petition started (it now has more than 4,100 signatures), JFNA Board Chair Richard Sandler and JFNA CEO Jerry Silverman issued a statement calling on American Jews to “work together to fight hate” and “educate by teaching diversity, tolerance and empathy.” The statement notes recent anti-Semitic attacks on the Jews of Whitefish, Montana, on Hebrew Union College in Cincinnati and on the 16 JCCs that received recent bomb threats. But it doesn’t name Bannon or Trump.

“If any of these legacy organizations want to remain or become relevant to young Jews, this approach is going to be a complete turnoff and a symbol of how out of sync these organizations are with young Jews,” Cotler said. “It exposes such a major generation gap.”

“The Jewish community is being uncharacteristically silent on some of the hate out of Trump’s associates, and uncharacteristically quiet on instances of anti-Semitism. It’s a shonda,” said Ben Murane, using the Yiddish word for shame. Murane is a senior editor at Jewschool, which is the Jewish Resistance’s unofficial organ. “I am baffled often why they are so vocal on other issues like U.N. resolutions and yet so silent on Bannon, the architect of Breitbart,” he said.

“Federations are stuck in an old model, they’re not touching young people,” Murane told Haaretz. “These are the kids who joined federation young adult groups. Then they wanted their institution to reflect their voices. But when they mobilized and reached out they were immediately rebuffed,” said Murane, who lives in Toronto.

Bend the Arc’s Cotler said, “We have a moral obligation to take action and ensure that no community, including our own, becomes scapegoated during this Trump administration. This feels like a critical moment where our community cannot remain silent.”