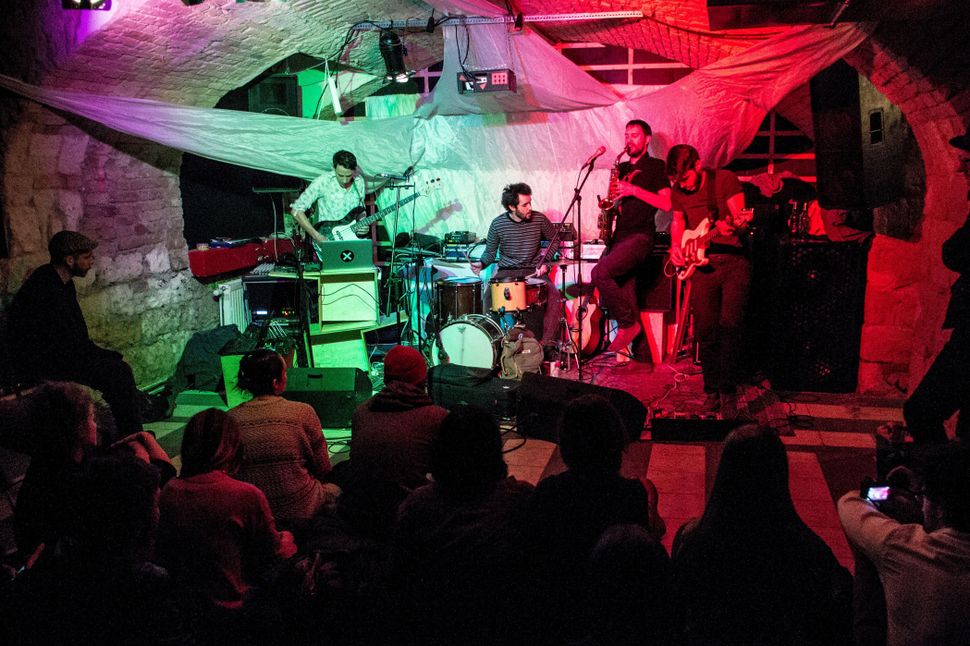 Something For Everyone: Musicians perform frequently at the Aurora Cafe, drawing a diverse crowd. The cafe also holds art exhibitions, film showings and Sabbath prayer services. Image by Zsuzsa Mekler

Budapest authorities moved on Wednesday to shutter the Aurora Cafe, which has served as a gathering spot for Hungarian opposition activists and nongovernmental human rights advocates. Authorities cited illegal drugs, but management said the government’s real aim is to muzzle opposition voices.

In America, “the Resistance,” as some call the activist opposition to President Trump, has drawn many Jews to its flag. But in Hungary, the resistance to Prime Minister Viktor Orban’s right-wing nationalist government includes a specifically Jewish address.

Located on Aurora Street in Budapest’s shabby 8th District, not far from the city’s old Jewish quarter, the Aurora Café is a cooperative community and home to many nongovernmental organizations.

It’s also one of Budapest’s hippest bars and music venues. There are exhibition areas for art, a performance space for music and theater, and a small film theater. Oh, and there’s a Torah upstairs. Young Hungarians gather there for daily prayers and for Kabbalat Shabbat, Friday night get-togethers to welcome the Jewish Sabbath.

Then, there’s the food.

One weekday morning, a young server at the café spread onion and paprika spiked Hungarian egg salad onto a handmade bagel. The bagel was the real deal – glossy on the outside and delightfully chewy. Wafts of bread and cinnamon drifted into the cafe from upstairs, where the bagels are made daily next to office spaces that host civil society organizations like the Roma Media Center, an independent news outlet covering the Roma community in Hungary.

“There aren’t too many bagel shops in Hungary,” Adam Schönberger, the cafe’s founder, said. There also aren’t many places in Hungary where signs to the bathroom are written in Farsi, for migrants who use the cafe space for community meetings.

This combined religious and cultural center is sponsored by Marom, the youth group of Hungary’s Conservative Judaism movement, and reaches about 25,000 Hungarians yearly, with concerts, parties and educational programs. Income from the cafe and bar subsidizes rent for civil society organizations whose offices are on the top floors of the building.

Since it opened three years ago, Aurora has become a bedrock of liberal activism in Budapest. Most of its operational costs are covered by income from events and from cafe and bar sales. But Aurora has also received funding from the New York-based Open Society Foundations, founded and chaired by the liberal philanthropist George Soros, along with other organizations, including UJA-Federation of New York.

Amid a Hungarian political culture listing ever further right, Aurora’s self-defined mission is to increase the number of socially active citizens to advance democratic practices in Hungary.

That mission has recently been under attack by Hungary’s right-wing nationalist government, which is known for its rhetoric against immigrants and minorities. In addition to an escalating campaign against Soros, the government is clamping down on civil society organizations serving minorities. In mid-June, Hungary’s parliament passed a law forcing every NGO receiving more than $27,000 from abroad to register as a “civic organization funded from abroad.” The label must appear on all the organizations’ materials. While some say the law is aimed at increased transparency, others denounce it as an attempt to label groups promoting minority rights — many of which get backing from sources in the United States and elsewhere in Europe — as foreign agents.

Schönberger is afraid the law will stigmatize Aurora. “It’s part of the political agenda to be anti-Semitic, anti-Roma and anti-LGBTQ,” he said.

Noting the frequent use of classic anti-Semitic tropes in the government’s current campaign against Soros, he said, “When the government is organizing an entire campaign against Soros, it is easy to see the anti-Semitic elements.” It is, he said, a “massive campaign where you will see a Jewish person trying to corrupt Hungary. At the end of the day, that’s the message you will get.”

The new legislation is almost the same as a law that passed in Israel last summer forcing NGOs that receive money from abroad to register as foreign funded. In Israel, the law disproportionately targets human rights organizations such as Amnesty International.

Marom, which was founded 20 years ago, is also headed by Schönberger. Before launching the cafe project, members of Marom held a discussion about how to use their resources outside the Jewish context. They decided that as a Jewish group it was important to build alliances with other minorities to fight exclusion and racism.

Schönberger says his personal desire to build alliances with other minorities comes from his own Jewish experience. He is the son of two Jews whose own parents survived the Holocaust. Schönberger’s father is a rabbi, one of the few trained locally in a Hungarian rabbinical seminary. 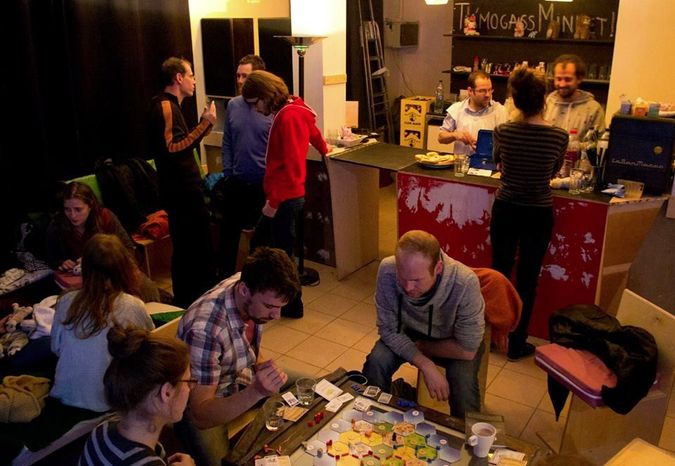 “If you’re Jewish in Hungary you’re part of a minority,” he said. “It’s not like in Western European countries, [where] it’s not a big deal anymore. There are bad feelings.”

A few years ago, a band performing for a Marom concert wrote a song for the event. “Gay, Gypsy and Jew, Hungary is so proud of you,” went the chorus. “Gypsy, Jewish and gay, Hungary is the place to stay.”

This became something of a slogan for Aurora, whose leaders embrace intersectionality as a powerful force for liberal activism.

In an office above the cafe, writer Ernő Kadét says that when Aurora offered office space to his group, the Roma Press Center, he was thrilled. He was eager to work with and learn from other civil society organizations. “We do a lot of work together,” he said, noting that other civil society organizations “know something new. They come from different backgrounds, and that’s why coming together could build something better.”

While helping civil society groups like the Roma Press Center is a primary mission for Aurora, the project’s leadership also wants to create a meaningful space for Jews. They see most young Jews in Budapest as already socially active and conscious and seek to draw these Jews to their space. For some, it has helped develop a meaningful sense of Jewish identity.

In Hungary, many young Jews don’t grow up speaking about their Jewish roots, Schonberger said. He sees them as missing part of their identity. “Marom is here to help draw up the missing part,” he explained.

Dora Koranyi, a 30-year-old Aurora patron, said she probably would never go to prayer services in a synagogue. But she goes to Aurora for Kabbalat Shabbat all the time. “When we do learning at Kabbalat Shabbat, we often speak about an issue mentioned in that week’s parsha [Torah portion], but we talk abut it in the current context, which makes it more real,” she said. “We talk about Judaism in the context of what’s happening politically in Hungary.”

Koranyi says there are many young Jews in Hungary who don’t feel comfortable in religious spaces because they are assimilated in Hungarian society. So it’s nice to have a space to meet like-minded people, experience Jewish holidays and not worry about fitting in religiously. Since Aurora has a bar, she added, she is also able to have drinks with friends after Shabbat prayers.

Non-Jewish young people also go to Aurora for community events and nightlife. Ana Cukovic, a recent graduate of Central European University, says Aurora is an important place because of its unique environment, one that, she said, is “welcoming, inclusive and safe. There are other places [in Budapest] that feel inclusive, but I think Aurora is the place in that sense.”

But Hungary’s rising right-wing nationalism is now a threat to Aurora. Schönberger’s concern comes after a riot in May by the far-right nationalist group Sixty-four Counties Youth Movement. The black-shirted group came to Aurora in the middle of a Sunday and posted photos with a cross that was drawn across George Soros’s face. Proudly videoing themselves, they spray-painted “Stop Operation Soros,” with the symbol of their group in several places near the entrance to Aurora. 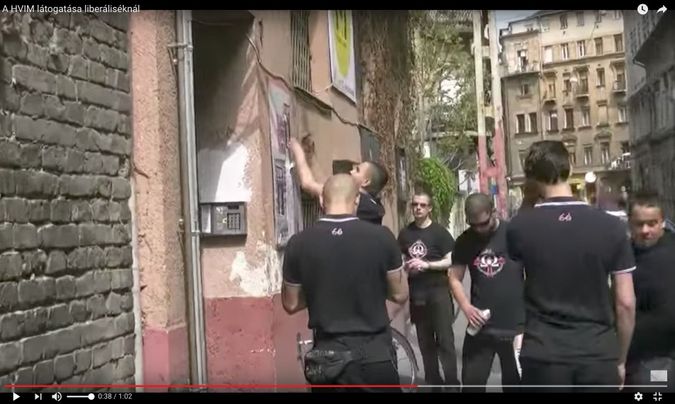 Under Seige: Black-shirted members of a right-wing nationalist group marched on the Aurora in May and put up posters denouncing philanthropist George Soros. Image by YouTube Screenshot

The next day, cafe employees spray-painted dots above the O’s in “Soros,” the Hungarian word for “beer.”

Schönberger’s strategy is to react with humor. He ironically hung in his office one of the signs from the raid with Soros’s face crossed out. But he says he needs to be more careful. Now that the government is provoking anti-minority sentiments, Schönberger says, the threat of oppression and violence is more real. When people see massive propaganda campaigns against Soros, they might get the impression that others feel the same. “They might feel justified to do anything against groups like this,” Schönberger said.

Schönberger says his goal at Aurora is to help transform Hungary’s prejudices against minorities. The state’s targeting of minorities should be a warning sign for the Jewish community in Hungary, he says, because while the Jews in Hungary aren’t under direct threat today, they could be targeted tomorrow. “That’s the reason these organizations have to help each other and work together,” he said.