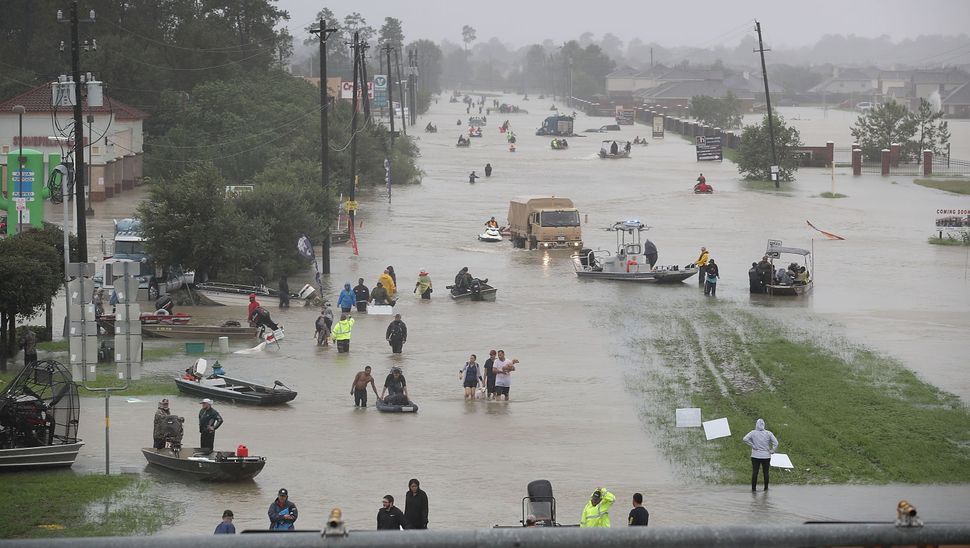 As many Jewish Houstonians leave their homes for the relative safety of emergency facilities, the rabbi of Texas’ oldest Jewish community is staying put. His congregants — and their synagogue — need him.

Congregation Beth Israel’s sanctuary is is filled with three feet of murky water, Rabbi David Lyon told the Forward. Founded in 1854, the synagogue is in the city’s Meyerland section, which sits in its heavily flooded southwest corner. The building has nearly four feet of water lapping at its sides.

Like a rude Sabbath guest from an old Yiddish story, Hurricane Harvey made landfall on Friday evening and overstayed his welcome in the country’s fourth-largest city. As of Monday afternoon, forecasters were predicting the storm would continue dumping rain by the foot on the Houston area until Wednesday. The storm is hitting the Jewish community hard because its people and institutions are clustered in the west and southwest, areas also flooded in 2015 and 2016.

“This is bigger than anything we’ve ever faced before as a community,” Lee Wunsch, president and CEO of the Jewish Federation of Greater Houston, told the Forward as he and his family were evacuating.

READ all our coverage of Hurricane Harvey

Yet other Houston residents had just finished repairing the damage from the last flood to surge through their neighborhood.

This is two blocks from my house sent to me from a neighbor. It’s only going to get higher. pic.twitter.com/wjkqhG4r2H

Since Hurricane Harvey began to accumulate on Thursday, Texas’ Coastal Bend has received so much rain that the National Weather service had to update the color coding on their maps to show the storm’s severity.

#Harvey in perspective. So much rain has fallen, we’ve had to update the color charts on our graphics in order to effectively map it. pic.twitter.com/Su7x2K1uuz

Some Jewish organizations are particularly vulnerable because they sit on flood canals quickly overwhelmed by Harvey. Beth Israel sits on the Brays Bayou. Across the water is the Evelyn Rubenstein Jewish Community Center, whose basement is flooding. The Seven Acres Jewish Senior Care Services center is just downstream. The Brays Bayou rose two feet above the highest previously recorded levels, turning the blocks on either side of it into small lakes.

“Our synagogues all have crisis plans,” said Wunsch. “They’ve been through this before.”

Terrible flooding in our neighborhood and beyond. Many evacuations. Will be long recovery. Thanks to all for concern pic.twitter.com/zC2Uim2HvY

Wunsch lives in Suger Land, a southwestern suburb that’s part of an area listed for mandatory evacuation. He and his family put together a traffic map from what their friends have seen on the roads and relocated to a hotel.

The Houston Federation estimates that over two-thirds of the city’s Jewish community lives in parts of the city that have been the worst hit by the flooding.

“Some people have anywhere from six inches to ten feet in their home,” said Taryn Baranowski, the Chief Marketing Officer of the Houston Federation. “We know anecdotally that we have members of our community that are living on their second floor without electricity or plumbing, waiting to be rescued.”

Rice University and University of Houston, the two Houston-area universities with the biggest Jewish populations, are in areas that have been relatively undamaged from the storm, though floodwaters are continuing to rise.

But that doesn’t mean that life is unaffected. Some students are volunteering with storm-displaced people at the city’s convention center.

The hurricane may also affect kosher food accessibility for students. Rabbi Shmuli Slonim of the Rice Chabad Center said that administration had asked him to provide hot kosher meals to students who are holed up at the university. “The local kosher establishment is now flooded,” Slonim explained.

Even as the storm lingers, a lucky portion of the affected Jewish community are bidding it good-bye. Despite its underwater basement, the community center is stockpiling and preparing to distribute food and other supplies. The Robert M. Beren Academy, a Modern Orthodox day school, is offering its campus as a relief area for families that have left their flooded homes.

“We’re ready to roll as soon as we have access to facilities,” Joel Dinkin, the ERJCC’s vice president, told the Jewish Herald-Voice.

Lyon, the rabbi of Congregation Beth Israel, lives in the northwest and still has electricity. He’s spent the past three days fielding calls from congregants letting him know they’re okay and updating his community on social media about storm developments and major rescues.

Reached for comment Monday morning, Lyon said he hoped to open the building in time to hold Friday’s usual Shabbat services — in the chapel, not the sanctuary.

“I think for many it would be a moment of clarity and comfort and hope,” he said. “It might be a nice signal that some semblance of order is resuming.”

By Monday afternoon, however, it had become clear that the sanctuary was not the only part of the shul to flood. The basement — where the boiler, the air conditioning units and water systems are — also took on several feet of water. It is becoming less and less likely that the synagogue will be open for basic operations by Friday.

Bruce Levy, Beth Israel’s president, said that a man from their maintenance team was able to assess the damage only after wading a mile in waist-deep water to the synagogue on Sunday night.

“We said, ‘Just check and get out of there as quickly as possible,’” Levy said of his conversation with the maintenance worker. “Because we didn’t want him to get stranded overnight.”

Levy said that though the synagogue had made a significant investment in a flood prevention system for the building, Hurricane Harvey “overwhelmed the system we put in.”

Lyon says that as soon as Beth Israel, which has over 1,600 families, can reopen its doors, it will serve food and provide shelter to anyone in the area who needs it.

“Were doing just fine,” Slatko said. “Our residents are doing great, we’ve got plenty of food, plenty of generators. We’re just working on mopping up the first floor.”

The home kept is residents distracted with activities and the storm upset only a few, he added.

“The storm is not over yet, but we hope that the worst part is done,” Slatko added. “But we don’t know.”