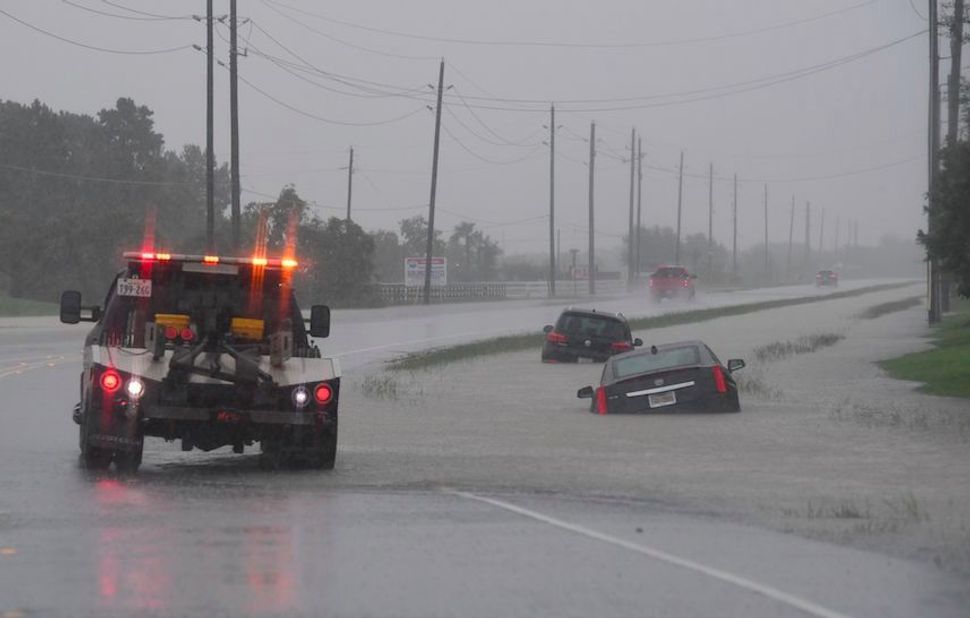 (JTA) — Some 150 neighborhood blocks in Houston that are home to members of the Jewish community have been damaged in floods as part of Hurricane Harvey.

Dozens of families were either evacuated or moved to the second floors of their homes, the local Jewish Family Service said during a conference call with community leaders, the Texas Jewish Herald-Voice reported.

Some of the families have flood insurance and others do not, according to the report. Many of the families affected by the floods also were flooded out in both 2016 and 2015.

The Evelyn Rubenstein JCC reported suffering flood damage. Prior to the hurricane it collected emergency supplies and will serve as a distribution center for the community. The Jewish Family Service also reported flood damage as did at least three Houston synagogues.

More rainfall and flooding are expected in the coming days.

The Jewish Federations of North America opened an emergency relief fund to support communities and individuals in Houston, San Antonio, Galveston, Corpus Christi and other areas that have been hammered by Hurricane Harvey.

The hurricane first made landfall on Friday evening near Corpus Christi, Texas, about 200 miles southwest of Houston.

On Monday morning the center of Harvey was entering the Gulf of Mexico, according to the National Hurricane Center, which warned that “Catastrophic and life-threatening flooding continues in southeastern Texas and flash flood emergencies are in effect for portions of this area.”

The update said that an additional 12 to 25 inches of rain are expected to accumulate through Friday over the upper Texascoast and into southwestern Louisiana, with some isolated areas receiving up to 50 inches of rain including the Houston/Galveston metropolitan area. It also warned of possible tornadoes over the next day. More than two feet of rain fell between late Saturday night and late Sunday night. City residents who were not in a safe place were evacuated from their homes by boats and helicopters. Many were taken to makeshift shelters since the emergency shelters prepared for the natural disaster proved to not be enough.

Houston’s two main airports reportedly suspended commercial flights and two hospitals evacuated their patients. Freeways throughout the city were under water with some flood waters nearly reaching the bottom of road signs.

At least three people have been confirmed dead in the flooding.

President Donald Trump will visit the stricken area on Tuesday, his spokesperson said.