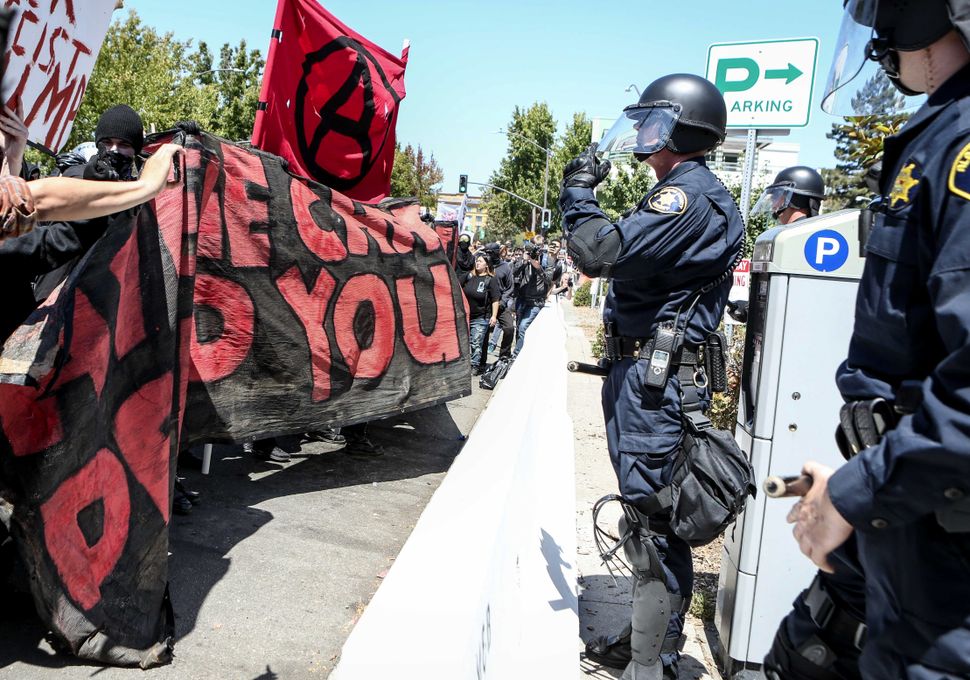 The Anti-Defamation League is advising cops to plant undercover agents among antifa activists, and to film protests where the group may clash with neo-Nazis and white supremacists.

The recommendation comes at the end of an ADL “primer for law enforcement” on antifa, the radical anti-fascist protest movement that has gained attention in the weeks since the white supremacist riot in Charlottesville.

“Police should capture as much as possible of the event on video, for use in any future arrests or prosecutions,” the ADL recommends in the document, posted on its website Wednesday. “Some departments also place undercover officers in the crowds, to spot suspects and/or to be in a position to assist if a fight breaks out.”

Breaking: ADL has retracted the recommendations. For updates, see here.

The primer also advises that police search protesters before allowing them into designated “assembly zones.”

The ADL did not immediately respond to an inquiry about the primer.

Civil liberties organizations have long opposed police infiltration of activist groups and police filming of protests, arguing that suspicion-less police surveillance of activists limits First Amendment rights to peaceful assembly and protest. Infiltration of perceived radical groups has been used as a political tactic to disrupt their activities as opposed to a way of preventing violence.

The ADL has raised millions of dollars in the wake of the white supremacist riots in Charlottesville, when a neo-Nazi murdered a left-wing protester in a car-ramming attack. Many of the counter-protesters in Charlottesville identified as part of the loosely organized antifa movement.

The term “antifa,” which has appeared increasingly in media coverage in recent weeks, is slippery. ADL uses it in its law enforcement primer to describe “a relatively small number of counter-protesters who engage in confrontational tactics, including violence, in their opposition to the right-wing extremists.”

The primer does not distinguish between anti-fascist ideology and the anarchist black bloc tactics that have long existed on the fringes of left wing protest movements. The ADL says that not all counter-protesters opposing white supremacists are antifa, but rather that they constitute a violent minority.

The primer also says that white supremacist violence is “more extreme” than antifa violence, and that it is “important to reject attempts to claim equivalence between the antifa and the white supremacist groups they oppose.”

The ADL’s interest in antifa appears to be new. In mid-August, the director of the ADL’s Center on Extremism told the Associated Press that the ADL does not directly track antifa groups.

At the bottom of its primer, ADL offers a bullet-pointed list of strategies for law enforcement in dealing with antifa, including surveilling protests, embedding uncover cover police inside of protests, and physically separating antifa from white supremacists while creating barricaded “assembly zones” for each side.