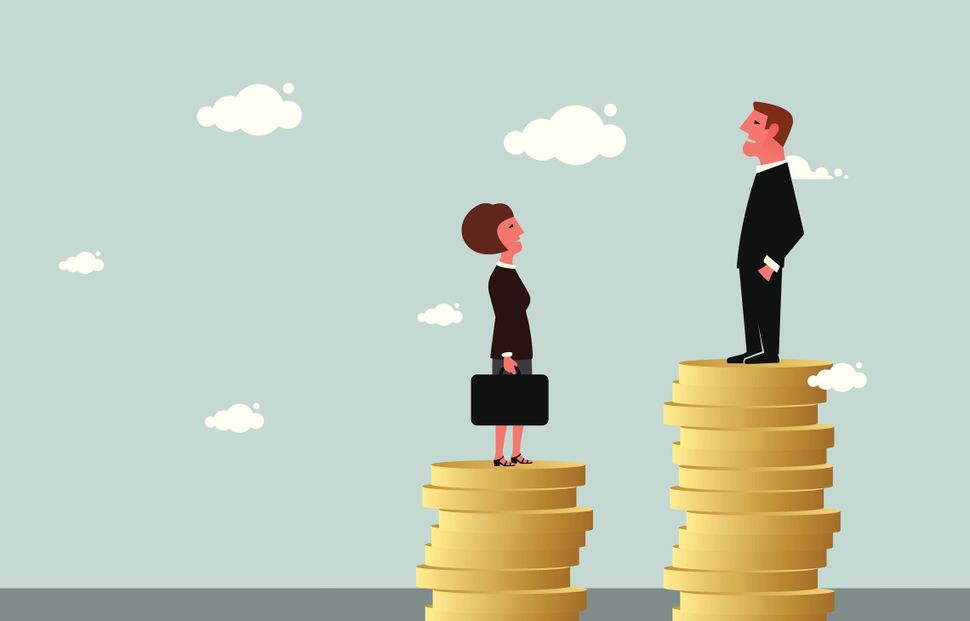 A quick look at the Forward’s salary survey this year confirms a longstanding and obvious truth: The Jewish communal world is sorely lacking in women leaders.

The only real question is, is it getting better, or worse? By the most basic of measures — the number of women in leadership positions — the answer is, worse.

In 2015, when the Forward last published this survey, 12 women were among the top executives leading large federations, advocacy and service groups. This year, only 11. After years of communal vows to improve, the percentage of women leaders is stuck at below 17%.

The gap is even more stark when it comes to raises. Since the Forward’s last salary survey, the average compensation increase for men in office then and now is $16,832; for women, the increase is $592.

Put in percentage terms, men received an average pay increase of 3.84% over these two years. The average for women was .22%. Meanwhile, the consumer price index — a standard measure for inflation — during this same period rose by 2.76%.

One of the main reasons for these disparities — but likely not the only one — is that women leaders in the Jewish communal world are not only rare, but also often run smaller, social justice oriented organizations.

“It’s a double whammy,” said Messinger, who took AJWS’s revenues to $60 million from $3 million during her 18-year tenure. “The people filling the largest jobs, for whatever reason, don’t seem to be putting women in those jobs. So women end up in smaller, newer organizations with fewer resources.”

To underscore the point, however, Messinger herself was succeeded by Robert Banks, a man (albeit one who is both gay and an immigrant).

But organizational size does not explain all the disparity. In the Forward’s 2015 survey, even after a sophisticated statistical calculation that took account of the budgets and staff size of each of the organizations, female communal leaders made only 80% of what male leaders earned.

For Gali Cooks, executive director of Leading Edge, the disparity runs deeper. According to Cooks, whose organization seeks to identify and promote leadership talent in the Jewish community’s next generation, about 70% of the total workforce in the Jewish not-for-profit sector is female; about 30% are men. “But when it comes to leadership positions,” she noted, “it’s the exact reverse.”

Only one woman is at the helm of the 16 largest Jewish federations in the United States. (The last survey listed 18 large federations, but the Jewish Federations of North America reclassified two of them.)

For some perspective, a 2016 report by the American Association of University Women on the status of women leadership said that among the largest not-for-profit organizations (those with budgets of $50 million or more), only 18% of CEOs are women, while at the smallest ones, women make up 55% of CEOs. Women CEOs in the not-for-profit sector earn 6%–8% less than their male peers, depending on the size of the organization.

Among Judaism’s major religious organizations, the percentages improve somewhat — but women are clustered in the smaller, less prominent clerical associations rather than in the large congregational groups.

Julie Schonfeld represents Conservative rabbis as the executive director of the Rabbinical Assembly, but Steve Wernick represents the broader movement as CEO of the United Synagogue of Conservative Judaism. The highest-ranking leaders of the Reform movement, the nation’s largest denomination, are all men.

For Shifra Bronznick, a longtime advocate of women’s leadership in the Jewish community, this is not the whole story. Bronznick, who founded the group Advancing Women Professionals (which ceased existence as a standalone group in 2015), sees real progress when it comes to women taking the pulpit at some of America’s most important congregations — or starting important new and vibrant spiritual communities of their own.

Bronznick pointed to the ascension of Rabbi Angela Buchdahl as the spiritual leader of Central Synagogue, in Manhattan, one of the largest and most prominent synagogues in New York City. She also cited female leaders such as Rabbi Sharon Kleinbaum of New York’s gay and lesbian Congregation Beth Simchat Torah; Rabbi Sharon Brous, who founded and leads IKAR, in Los Angeles, one of the most important new spiritual communities of young people in the Jewish world, and Rabbi Rachel Nussbaum of Seattle, who leads Kavana, an independent Jewish spiritual community.

Women also lead two major Jewish foundations — the Wexner Foundation and the Weinberg Foundation — she noted, as they do “many groups in the social justice world,” such as Avodah, Bend the Arc and Mazon.

“There are many places where things are happening,” she said. “It’s the old guard — the federations and national defense organizations — where men are still taking over. But these legacy organizations are declining in influence.”

(In 2015, Hoffman received $1.3 million. A spokeswoman for the Jewish Federation of Cleveland explained, that an annual retirement payment that counts as part of his compensation “required more funding as he neared retirement age.”)

But today, the federation system is in the midst of a historic opportunity to demonstrate a fresh commitment to female advancement. In Chicago, Boston and Cleveland, the long-serving CEOs are preparing to retire.

“Plainly there are things we could, and should be, doing better,” said Barry Shrage, who will be departing from his position as president of Boston’s Combined Jewish Philanthropies next year. “It should be a priority to consider very seriously the many women who are qualified to do this kind of job.”

Shrage said that one of the biggest challenges the job presented, for him, was the time commitment.

“No matter how you slice this job up…it could still be a 12-hour-a-day job,” he said. The top federation official, Shrage explained, “is the visible face of the Jewish community. My part has been cultivating our relationships, not just with wealthy donors, but with key academics, local community leaders, program managers and really anyone who wants to see me. Our goal is not just raising more money but developing programs that uplift the whole Jewish community. I have to be everywhere.”

Asked if he thought this posed a special challenge for women due to “double shift” responsibilities they may take on in their families, he said, “I’d never stereotype women one way or the other… I don’t know.”

He added: “No one says you must define the job the way I do. You actually shouldn’t be required to work 12, sometimes 14 hours per day.”

Aron Ain, co-chair of the committee currently searching for Shrage’s successor, said he didn’t share Shrage’s uncertainty about whether a woman who also had family responsibilities could put in the hours necessary for his federation’s CEO job.

“I grew up in a home where my mom graduated from high school at 14, college at 17 and law school at 19. She then worked as an attorney until she was 83,” he said proudly — all, he noted, while also raising five children, including himself.

“So for me… if we meet a fantastic woman with five kids and she is the best candidate, she will get the job,” he said.

According to Cooks, “They’re looking for a unicorn; someone who can do everything, in fact an impossible number of things.” And, she suggested, they’re more likely to see men somehow playing this role.

Several women view search committees as part of the problem. “We raise the issue of some of the qualifications they’re putting out for these jobs at large organizations,” Cooks said.

Ain, who is CEO of Kronos, a workforce management software and services company with more than 5,000 employees, stressed his commitment to giving full consideration to women in his committee’s search process. He termed the current paucity of women in Jewish communal leadership ranks “wrong.” The committee itself consists of six men and five women.

At the same time, Ain said, during a consultation about the CEO search with various Boston federation constituencies, from donors to grassroots supporters, “we didn’t hear” anyone bringing up the issue of women.

“The areas people focus on are Jewish education, Jewish life and, certainly, someone who can motivate us to create programs to excite the next generation,” he said. Also, “someone who can raise money and be the federation’s spokesman.”

Cooks advocated a “distributive leadership model” in which the many facets of the CEO’s job could be broken up and made more manageable.

Shrage, for his part, said that is already the case with many CEO jobs.

“I’m the beneficiary of having multiple people playing multiple roles,” he said. “My strengths are interpersonal. We have an amazing woman here who is our chief operations officer.”

Asked if she might be a candidate to succeed him, Shrage said, “I know for a fact that she’s not interested in the No. 1 position.” Judy Shapiro confirmed that her current job “is the perfect role for me.”

Steven Davidson contributed to this story.