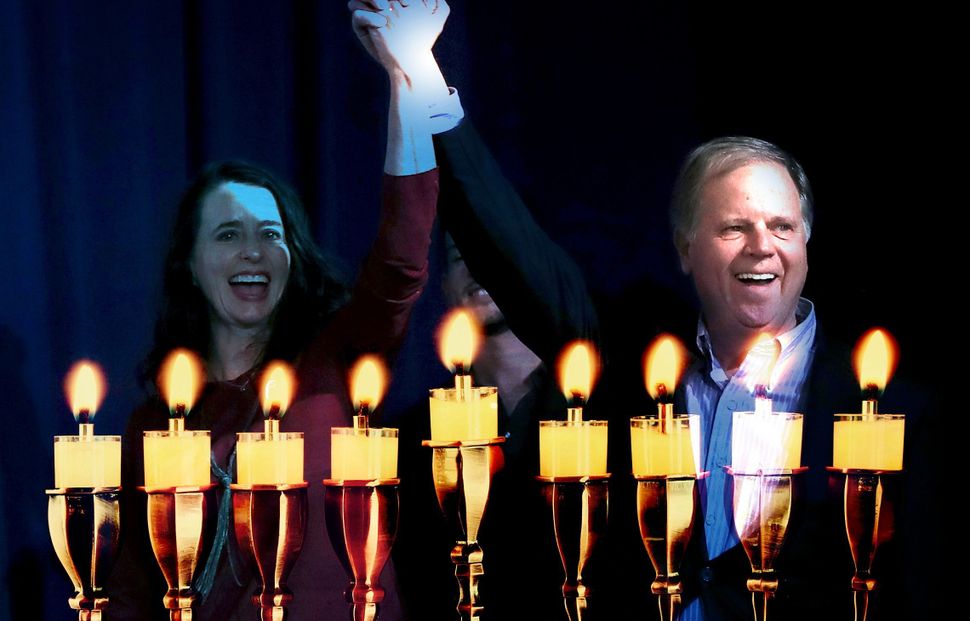 A Jewish Alabamian sees lots of parallels between the recent election and Hanukkah. Image by Nikki Casey

On the first night of Hanukkah, Alabama’s Jews said the Shehecheyanu, the 2,000-year-old prayer of generalized thanksgiving that’s almost always appropriate: “Blessed are You, Lord our God, King of the Universe, who has granted us life, sustained us and enabled us to reach this moment.”

Then they were presented with another miracle, on top of the one that kept the oil burning for eight nights. It seemed impossible, but this red state showed its Hanukkah spirit and went blue. Doug Jones, an underdog of Maccabean proportions, won the Senate seat.

Outsiders asked me if “miracle” was an overstatement. After all, Roy Moore has faced countless ethical violations, received donations from white supremacy groups and been accused of sexually assaulting underaged girls. Should Alabama be lauded for simply doing the right thing?

It’s been 29 years since Alabama elected a Democrat to statewide office.

Jones won with 49.9% of the vote; 30% of white voters and 96% of black voters voted for him, and his highest support came from Jefferson County (Birmingham), Madison County (Huntsville) and Mobile County. These cities are home to Jewish populations big enough to support active synagogues.

For Alabama’s Jews, even if it had not been Hanukkah, Shehecheyanu would have been in order.

Miracles have included finding drinking water and shade, as Hagar did when she opened her eyes in the desert. Miracles are about big things like survival and small ones like candlelight.

This victory is closer to the Hanukkah story than many realize. Instead of Antiochus, there was the Ku Klux Klan. Extreme, violent prejudice in the Jim Crow South led to the desecration of sacred space.

In 1963, the bombs were planted in the basement of 16th Street Baptist Church. Five years earlier, bombs were planted in the basement of Temple Beth El, on Birmingham’s South Side. The synagogue’s location on a hill and wet conditions caused the Beth El bombs to diffuse. Unfortunately, the 16th Street bombs remained intact, killing four girls and giving Birmingham the epithet “Bombingham.” Birmingham’s story does not belong to the Jews. We were KKK targets, we were in harm’s way, we were not harmed, not like that.

The bombers went over a decade without legal repercussions. Robert Chambliss, aka “Dynamite Bob,” was arrested and put on trial in 1977. Two decades later, Doug Jones, who had been in the courtroom for Chambliss’s trial, rounded up and persecuted the rest of the men involved, all KKK members. 16th Street Baptist church has been rebuilt and is now a symbol of resistance, survival, defiance.

I’m not such a as tzaddik, or righteous person, as Rabbi Abraham Joshua Heschel, who said he was “praying with his feet” when he marched with the Rev. Martin Luther King, Jr. But standing in line to cast my ballot, I couldn’t help but feel I was doing something similar. I hope all of Alabama’s Jews felt that way. Some, like the generations before. Others: Again.

Roy Moore’s racism, homophobia, Islamophobia, sexism and hypocrisy have made national headlines since the saga surrounding Moore’s refusal to remove the Ten Commandments from the courthouse in 1999. In a December radio interview, Moore criticized George Soros, stating that Soros was “not of our American culture” and, because of his lack of acceptance of God’s salvation, was going to “not a nice place.”

Before the election, Roy and Kayla Moore addressed the media regarding the diversity of their friend group, claiming to have black friends and rabbi friends. And, to really put the sour cream dollop on the latke, they said they even had a Jewish attorney. Rabbis across Alabama have denied any contact with the Moores, and no attorney has gone public as the Jew-du-jour. And while the identity (and existence) of the attorney has yet to be determined, that didn’t stop Alabama Jews from wishing him (probably him) a happy Hanukkah on social media. No one responded, but perhaps he will show up, speedily and in our days, to a Seder with Eliyahu in the spring.

Things sound like have they’ve wrapped up nicely here in Alabama. The battle is won. But we know the Maccabees are not the end of the story. There is no synagogue standing today. And yet, we still celebrate them and the miracle of the oil.

As Jews, we define ourselves by the miracles we’ve experienced. Whether we say a blessing before eating breakfast or sit in synagogue once a year during the High Holidays to hear about the ram being sent in Isaac’s place, we are engaging in the miraculous. Today’s miracle was keeping a serial sex offender out of office.