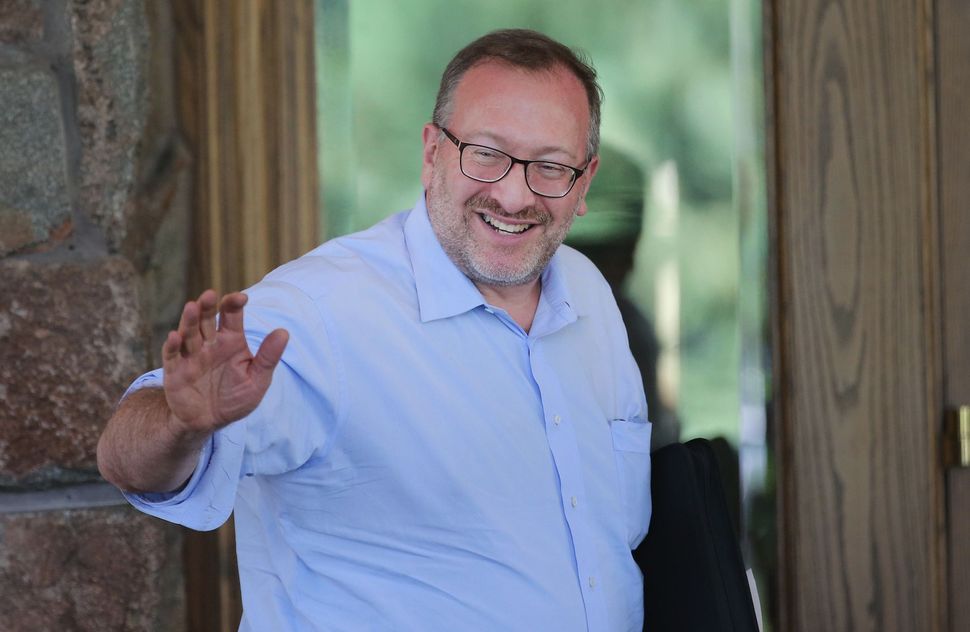 Klarman, who is Jewish and a registered independent, has donated more than $250,000 to around 80 Democratic candidates so far this year, the Forward can reveal.

The investor gave more than $2.9 million to Republican causes in 2016, but started to break ranks with the party during the presidential election and supported Hillary Clinton over what he called President Trump’s “erratic” leadership. By October 2017, he was comparing Trump to Adolf Hitler at a private philanthropic gathering. And the following April, he publicly vowed to help Democrats win — going so far as to pledge that he would invest the earnings of his tax cut, which he described as something “I neither need nor want,” toward efforts to defeat the GOP.

He’s following through on that promise, a Forward analysis of Federal Election Commissions filings shows. And the candidates he’s supporting reflect the widespread perception that the road to a Democratic House of Representatives lies through certain key swing districts, including several featuring Jewish Democratic candidates.

“This is the most chaotic, unprincipled, and dangerous administration in history. Donald Trump and his enablers are a clear threat to American Democracy. The Republicans in Congress have failed to hold the President accountable and have abandoned their historic beliefs and values. For the good of the country, the Democrats must take back one or both houses of Congress,” Klarman said in a statement.

“I’m investing in fighting the current administration and to elect Democrats to the Senate and House of Representatives. While I have long supported overturning Citizens United and getting the money out of politics, I’m not going to sit idly by at this critical moment.”

His donations may seem small compared to, say, fellow billionaire Michael Bloomberg’s promise to pour $80 million into Democratic coffers. Yet his spending is another sign major donors may be “more confident in Democrats’ chances overall in the midterms,” Geoffrey Skelley of the University of Virginia’s Center for Politics told the Forward.

“The huge fundraising hauls many Democratic challengers put together in the second quarter serve as more evidence that Democrats and their donors, big and small, are energized,” he added.

Such donations are also a sign that the Republicans have lost funds they enjoyed pre-Trump. Klarman gave $7 million to GOP candidates during Barack Obama’s presidency. In 2018, he’s only donated to one Republican campaign, that of Rep. Elise Stefanik, a moderate Republican in upstate New York. He gave her $2,700. In contrast, he’s given nearly $30,000 to Jewish Democratic challengers alone.

Out of about 60 races nationwide that experts expect to be competitive, nearly 40 of them have a higher than average Jewish share of the population. Because Jews tend to be more liberal, affluent and vote at higher rates than the general population, Democrats consider their active support an essential component of their strategy.

The party, which needs to flip at least 23 seats to retake the House, has seen about an eight-point advantage over Republicans in congressional polls. These trends, along with Trump’s job approval rating hovering barely north of 40%, have led some experts to see a clear path for a Democratic “wave” in November, helped along by a number of strong Jewish contenders in urban and suburban districts. 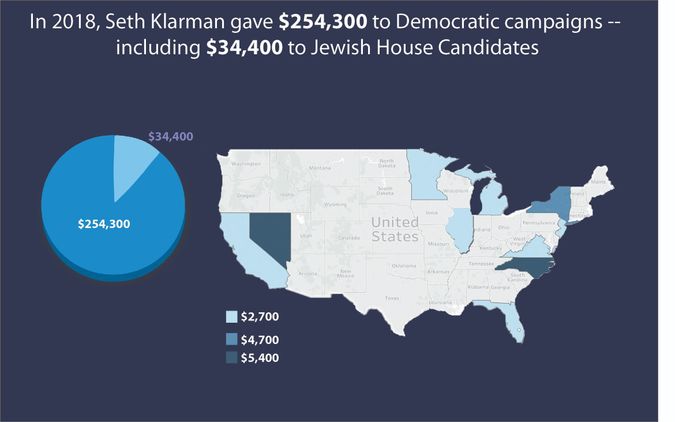 Apart from the Jewish candidates, he has given directly to at least 47 other House candidate and 14 running in the Senate. His largest single donation of $36,000 went to a PAC supporting Rep. Joe Kennedy’s reelection bid in Massachusetts.

Other Jewish billionaire Republican donors have stuck by the party in 2018, though some of their spending has also declined.

Hedge fund manager Paul Singer continued to support Republicans in 2018, but his spending on national races has dropped precipitously from previous years. Records show he has given more than $333,000 this year, cutting six-figure checks to the Republican National Committee and smaller checks to individual candidates like Young Kim in California, but still a big drop from the more than $26 million he gave Republicans and conservative causes in 2016. (Singer has continued to stay active in local politics, donating $1 million to support pro-charter school groups in New York State.)

And Florida billionaire Norman Braman has also greatly reduced his Republican donations in 2018. Braman gave more than $7.5 million to Republicans and conservative causes in 2016, but has not given any money to national races, FEC filling show. However, Braman has continued to support local races, giving more than $250,000 this cycle to Florida-based conservative PACs.

However, casino mogul Sheldon Adelson has gone the other way. He gave $30 million in May to the Congressional Leadership Fund super PAC in an effort to keep the House in Republican control, Politico reported. The donation is triple what he gave the PAC last cycle, when he donated $10 million in August 2016. Adelson made another large donation in June when he gave $371,500 to another Republican PAC called Protect the House, FEC fillings show.

Klarman is also a philanthropist. He donates tens of millions of dollars each year to organizations addressing anti-Semitism, Arab-Israeli employment and education and helping Americans connect with Israel, according to his foundation’s most recent tax filing.

While Klarman’s political donations may not come close to Adelson’s, their strategic placement could make a difference: An NBC News analysis published Wednesday shows that Democrats are outraising Republicans in 36 of the 40 most competitive House races.

Update, 7/19/18, 10:30 a.m. — This article has been updated with a quote from Klarman and clarification that he supported Hillary Clinton during the 2016 election.