He Bears Witness At A Child ‘Concentration Camp’ On The Border 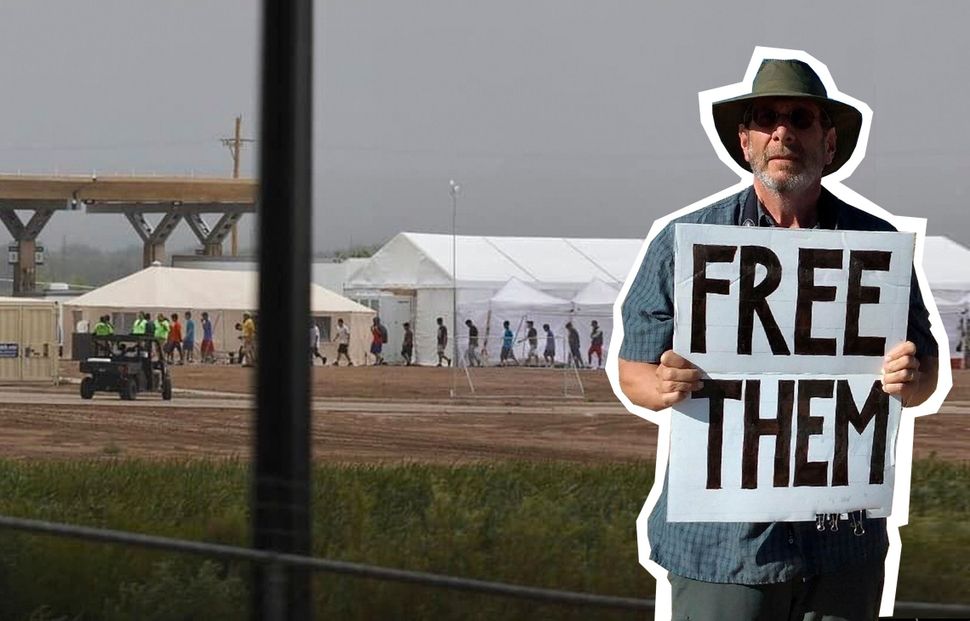 In a dusty, deserted patch of desert near the border with Mexico, inside a tent city enclosed with a giant fence, are thousands of detained children and teenagers. Just outside the locked entrance, sitting on a metal chair and holding a sign that says “FREE THEM,” is Joshua Rubin.

Rubin, 67, a software developer from Brooklyn, has been keeping watch at the entrance to the camp, in Tornillo, Texas, since the middle of October. He spends his days watching trucks — filled with construction materials, water and child refugees — drive inside, unload, and come back out, and peering through the chain link fence at the teenagers locked inside. By night, he sleeps in an RV. He plans to stay for at least another month.

“The hardest part of it is seeing people moving [into the camp,] and seeing it by myself,” he said in an interview. “Seeing faces go by. You’d think it would get easier, but it doesn’t.”

Though Rubin had protested at the border multiple times this summer — and was arrested once — in October he decided he didn’t want to continue reading the news from home. He set up a Facebook page — Witness: Tornillo — started a GoFundMe, and drove the nearly 2,200 miles from New York to West Texas. His goal: to bring attention to the Tornillo camp, and hopefully shut it down.

“The fact that there are children involved here is kind of a window into people’s hearts,” he said. “I was hoping I could show people that immigrants are just children who need help.”

Rubin, who identifies as ethnically Jewish, is part of a wave of activism aimed at protesting the detainment of children without their families at immigrant processing centers. Rabbi Josh Whinston, a Reform rabbi from Ann Arbor, Michigan, led a group of 200 people to Tornillo for Thanksgiving. Rabbis from Chicago, Little Rock and elsewhere have led “border pilgrimages” to Tornillo, which is south of El Paso. 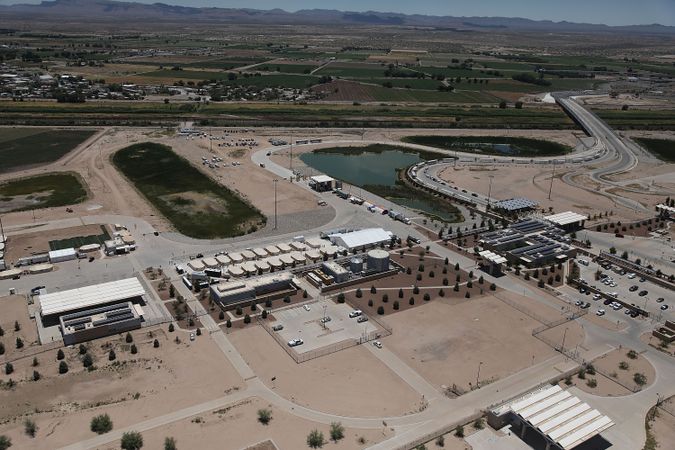 An aerial photo of the Tornillo camp from June 19. Image by Getty

The Tornillo camp was built in June to process refugees on their way to longer-term detention centers in El Paso, or, for children, before they were sent to foster homes or to their sponsors. When the Trump administration enacted policies separating asylum-seeking parents from their children this spring, the minors were taken all over the country, to shelters and to foster homes. Court rulings have forced the administration to reunite the children with their families. In September, the administration began moving those children to one location: Tornillo.

Now, the average stay in the camp is nearly 60 days for children, according to news reports, on top of the months that some children there have already spent in detention centers elsewhere.

They live in massive walled tents; the largest tent holds 300 teenage girls. They receive some schooling from teachers working on contract and play soccer on a small turf field. The camp, run by Baptist Family & Child Services, a large disaster relief not-for-profit, costs about $100 million a month to operate.

Joshua Rubin, Brooklyn, NY, explains how he ended up sitting outside a kid’s’ concentration camp in the TX desert for the last month+ #WitnessTornillo #ChristmasInTornillo #OurKids #ShutItDown #JesusWasAnImmigrant #GoFundMeWitnessTornillo pic.twitter.com/AmIpyFjzIM

Rubin’s residency on a chair outside the camp’s front entrance has made him something of an authority on the camp. He says that contract workers in the camp, despite having been warned not to speak with him, sometimes “get tempted” and leak information to him. He says he’s also brokered contacts between sources from the camp and journalists reporting on what goes on inside.

A New York Times article from mid-October reported that the camp held 1,500 minors. Recently, Rubin says, he’s seen the population swell. He bases his estimates on things he hears from the workers and from watching vans with opaque windows and trucks with portable toilets going in. Lately, he’s noticed more teenage girls coming into the camp. He thinks there are about 2,500 minors in the camp right now. The Department of Health and Human Services said in September the camp could have capacity for 3,800 by the end of the year.

Rubin says that the Tornillo campsite is “fragile,” meaning he thinks that a critical mass of protesters — and media attention — could shut it down. In pictures posted on the Witness: Tornillo Facebook page, Rubin notes that nearby power lines don’t appear to be connected to the camp, and he says that the camp is run off generators. His pictures show trucks bringing in potable water by the 2,000-gallon load. 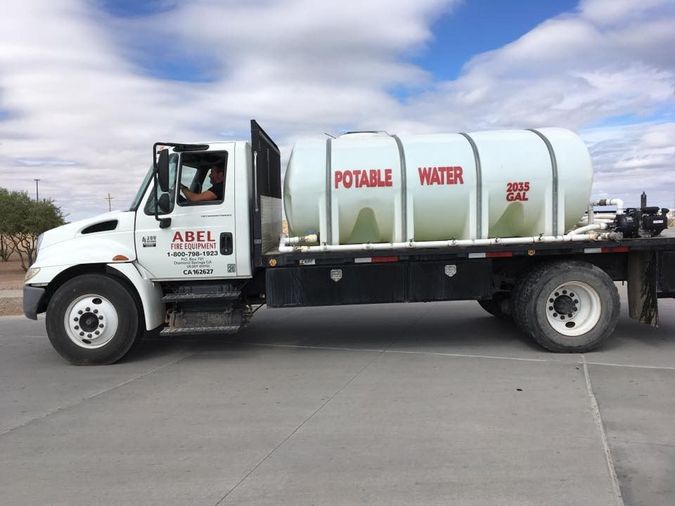 A truck bringing drinking water into the camp. Image by Courtesy of Joshua Rubin

Rubin believes that the children should be reunited with their families immediately, and that the U.S. should not bar immigrants from coming into the country.

“Let’s open our arms to people coming to the border,” he said. “It’s not going to hurt us.”

Rubin’s wife, Melissa Bowen Rubin, said that having him away from the house for so long has been difficult. He was not home for her 65th birthday or Thanksgiving, and will miss the holidays and his son’s 30th birthday if he stays through December. Bowen Rubin, 65, a painter and a teacher of English as a second language, said she expects him back in Brooklyn sometime in January. 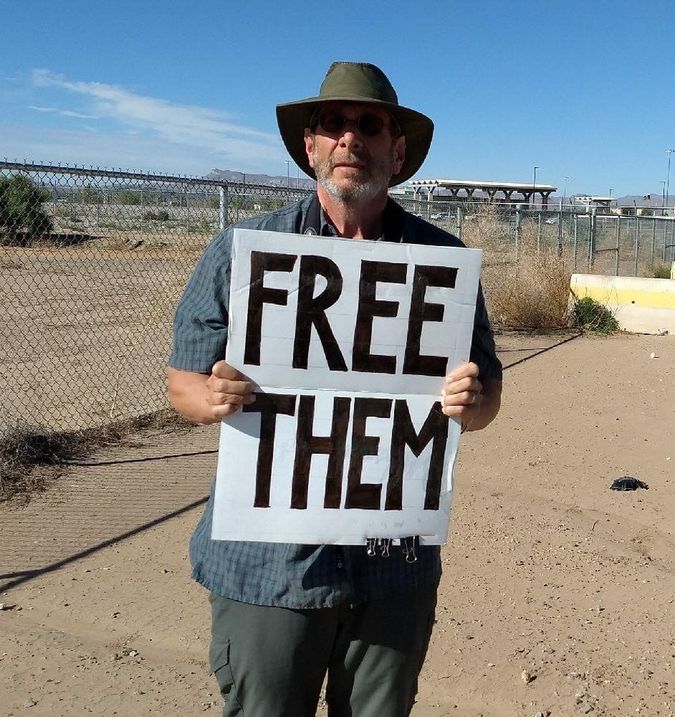 Rubin standing outside the entrance to the Tornillo camp. Image by Courtesy of Joshua Rubin

“It’s a bad season to miss,” she said. “It’s the sacrifice on the home front.”

Bowen Rubin went to visit him for several days recently. His absence has been difficult, but she believes in his activism.

“It was great to go down there and see the life that he’s creating,” she said. “This sort of thing is what has to be done in order to have a hope of a solution or a serious response.”

Rubin acknowledges that the distance from his family has taken a toll on him, too.

Rubin, who is self employed, says he isn’t sure what will come of his sitting and watching and witnessing. The GoFundMe page has earned nearly $7,000 in a month and a half. He says his goal right now is to get a large contingent of people to come to the camp over Christmas.

His vigil has taken on a higher intensity in recent days, however — the camp appears to be bringing in construction materials at an even higher rate than usual. He’s seen dozens of toilets — a good barometer for number of residents — trucked in.

So until he goes home, he’ll continue taking pictures, posting on social media and watching the trucks go in and out.

“All we have to do is say, ‘Enough of this nonsense,’ and say, ‘Unite the families,’ and this goes away,” he said. 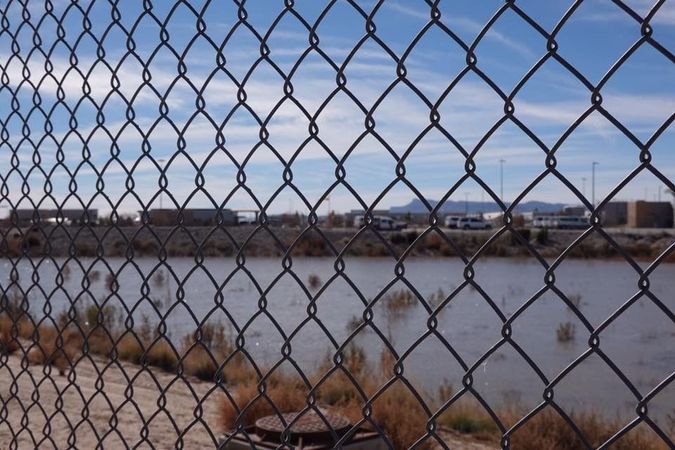 Image by Courtesy of Joshua Rubin

He Bears Witness At A Child ‘Concentration Camp’ On The Border