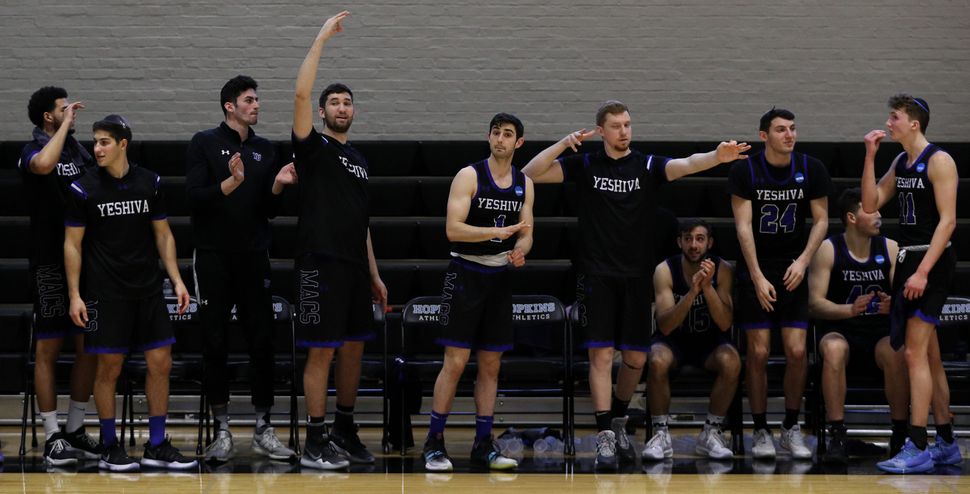 The Yeshiva University basketball team did everything possible to protect themselves.

After a second-round victory in the NCAA Division III tournament Saturday night — the best result in school history — the team decamped to Long Island rather than returning to the Manhattan campus, which had been partially shut down because a student tested positive for coronavirus. They (and some of their wives) moved into the guest bedrooms of a few players’ parents’ homes, and limited their interactions to their hosts, their coaches and each other. They practiced at whatever local gyms would have them, whenever they could get court time, and prayed and celebrated Purim in isolation.

They were not going to let the pandemic ruin their historic run.

And then it did.

Late Thursday afternoon, as the 18-member team neared the end of a daylong bus ride to Ashland, Va., where their third-round game was to take place Friday afternoon, the NCAA announced it was cancelling all tournaments. The decision came hours after New York State said it would temporarily close Broadway theaters and as major museums shuttered, along with all schools in Ohio, and the Disneyland theme park in California.

It’s a common-sense measure, preventing physical contact among athletes as governments escalate efforts to enforce social distancing to prevent the spread of the virus. But it has also dashed the dreams of some of the best basketball players in Yeshiva University’s history: To bring home an NCAA championship.

“We’re devastated,” said Laurel Turrell, the mother of Ryan Turrell, a sophomore star. “I sent my son a note and said, ‘I’m so sorry. But we all know that God has a plan.’ This is where we buckle up our shoes and straighten our ties and say, ‘You just have to go with what God offers.”

The Y.U. Maccabees — universally called the Macs — lost their season opener and won every game since, barging into the national tournament on the back of fast-moving offensive play, locker-room Torah sermons and the support of an energized, largely Orthodox Jewish fan base.

But as their wins piled up, coronavirus arrived in the U.S. — and in the community that forms the backbone of their audience. New Rochelle, suburb not far from campus, has a containment zone with an Orthodox synagogue at its center; Orthodox rabbis in Teaneck, N.J., have not only shut their shuls but advised congregants against hosting friends for Shabbat meals and playdates.

Amid the growing distancing measures, the Macs’ success took on added significance: This was not just a chance to watch boys in yarmulkes dunk, but a reprieve from corona-mania to quarantined Jewish families. Tzipporah Baratz, stuck at home with her two daughters in New Hempstead, N.Y., after an unfortunately timed visit to the New Rochelle synagogue, has been watching all season — and watched especially intently last weekend.

“Of course, when the game ends, you’re like, ‘Here I am still,” she said. “But while the game is going on, it’s a relief. You just get to sit and think about something else.”

Even before coronavirus, the Macs’ success was the talk of the Orthodox world, of which Yeshiva University is the bedrock institution of higher education. They were 29-1, a record better than any other Division III team in the country, and won their games by an average of 15 points.

The coach, Elliot Steinmetz — an alum of the team — attributed their success to the players’ speed and accuracy. They run a motion offense, which means constant passing and moving around the court. The ball moves until it finds the player in the best position to take a shot, which explains how they managed to score at a stunning 63% rate in the first two tournament games (a great NBA team hopes for above 47%).

The team’s obvious skill and cohesion on court made it a real contender for the championship — and is making the cancellation of the tournament all the more bitter.

“They had a real legitimate chance of taking the whole thing,” said Daniel Aaron, a Yeshiva alum who played for the Macs in the early 1990s. “You can’t go shot for shot with them — they shoot too well. They have too many weapons.”

Winning the NCAA tournament has been a pipe dream of the Yeshiva University community for decades. Then Steinmetz was elevated to head coach in the spring of 2014. At his first meeting with the incoming upperclassmen on the team, he made clear his lofty goal.

“He said, ‘This program’s gonna win a national championship,’” recalled Shelby Rosenberg, who was on the team Steinmetz’s first two seasons. Knowing Steinmetz, Rosenberg said, he would have drilled that vision into his players’ heads at every 6 a.m. practice. 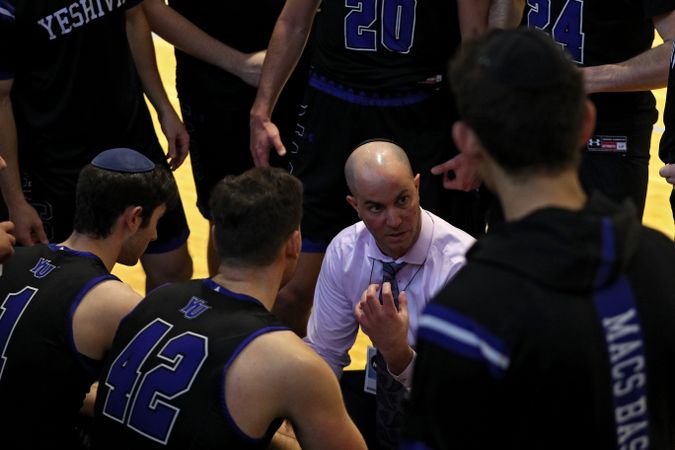 Steinmetz huddling with the team during a timeout against WPI. Image by Getty

Even though they can’t go all the way now, Rosenberg said, they made their mark

“While it is unfortunate that they’re not gonna get the right opportunity, the results are there,” he said. Steinmetz has proven: “The talent is there. The Jews can play some ball.’”

Thursday was not the first time coronavirus has tripped up the team. Last week, when they were less than an hour’s drive from their hotel outside Baltimore, where the tournament’s first two rounds took place, the team’s reservation was cancelled. The next morning, the NCAA announced that only the players, support staff and journalists would be allowed in the gyms for the games — no fans.

Their first game was postponed more than an hour so their opponent, Worcester Polytechnic Institute, could get permission from their administration to let their team play because of the Y.U. student with the virus.

The Macs beat Worcester handily. They rebooked hotel rooms. The parents who had joined them in Baltimore set up a watch party in a hotel ballroom, complete with a projector, a large screen and an all-day kosher buffet.

“We were all yelling as if we were at the game,” recalled Astrid Leifer, mother of Gabriel Leifer, one of the team’s standouts. “We were calling out the refs for bad calls — we were really enthusiastic.”

Daniel Tamir, an assistant coach, said he wasn’t sure how the players would handle the deafening silence in the stands. Their last regular season game had been the best attended of the year.

“It’s something that I thought would be more of an issue,” he said. “But the second we had the tip-off in the first game, you saw that the guys were just locked in.”

After the game Saturday night, Steinmetz secured host homes for his team in the Five Towns, Long Island’s Orthodox enclave, so they could effectively self-isolate, and insulate themselves from any more concerns about exposure to the virus.

“We just felt like, at the time, with everything we were dealing with on the road, it was prudent for the optics to keep the kids off the campus,” Steinmetz said in a phone interview Thursday from the bus to Virginia, before news of the tournament cancellation. He did not immediately respond to a request for comment on the cancellation. 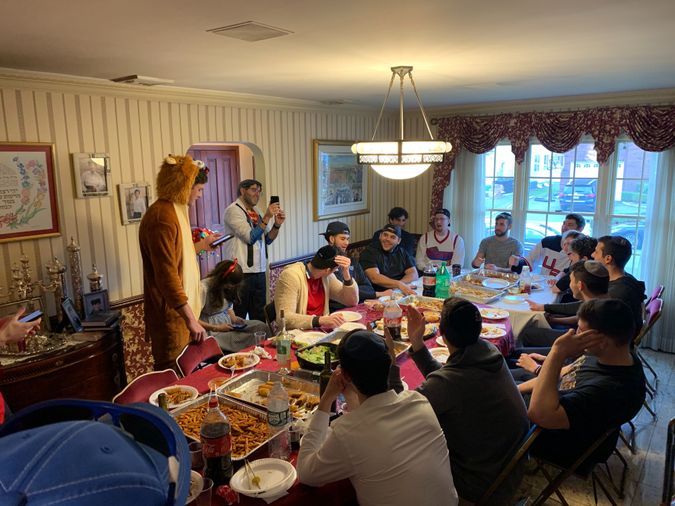 The team gathered for a Purim seudah, or traditional meal. Image by Courtesy of Elliot Steinmetz

On Wednesday, with fans banned from all NCAA games, the school’s focus turned to psyching people up to again watch via livestream.

Now, the team is turning the bus around, and heading back to New York to pick up the pieces. One of the players, Tyler Hod, is getting married on Sunday; his wedding has already been cut down by 550 guests to just immediate family and a bridal party, according to his mother, Janet Hod. They had been planning an aufruf, a pre-marriage celebration, for Shabbat in Ashland. Now they have to make new plans. 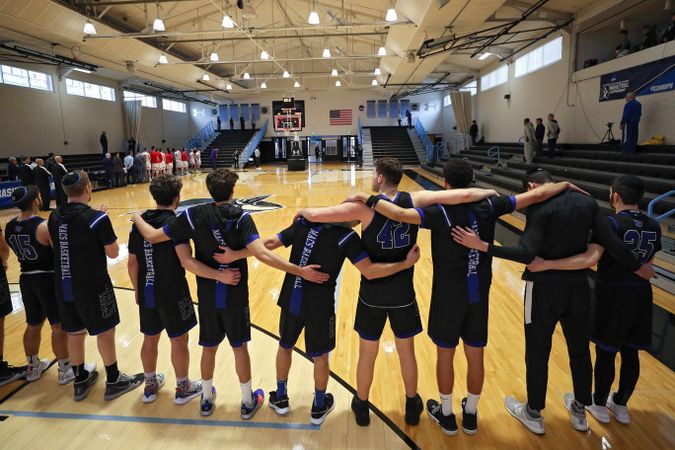 Standing for the national anthem last Friday before the first-round game. Image by Getty