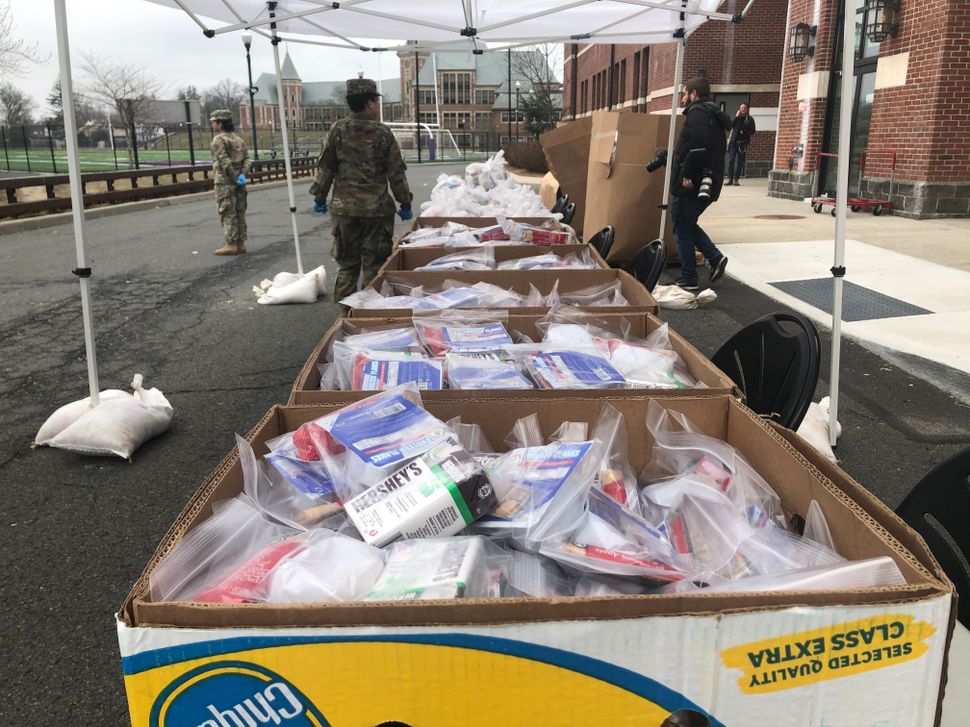 New Rochelle High School was almost lifeless on Thursday. A school normally filled with more than 3,000 students was empty, the front gates tightly shut with a chain and a lock.

But around the back of the school was a sign of life that is emblematic of these strange times — men and women in military uniforms, volunteers from the National Guard, handing out bags of dry goods and breakfast.

Thursday was the first day that the National Guard was deployed in New Rochelle, a Westchester County city that’s the epicenter of a coronavirus outbreak, the second-largest in the country, and one that has heavily affected this densely Jewish community.

Young Israel of New Rochelle, an Orthodox synagogue, is where an undiagnosed man exposed others to the virus at community events.

On North Avenue in New Rochelle, Tlaquepaque, a Mexican restaurant, was closed, with dark wooden chairs resting on tables for another day. At the public library, staff hung signs on the restroom doors reminding visitors to wash their hands, and chatted about how the world is discussing an unlikely trio: China, Iran and New Rochelle, New York.

Of the 216 cases in New York, 121 are in Westchester County, as of Wednesday afternoon. That high rate of contagion spurred New York Gov. Andrew Cuomo to create a containment zone in a one-mile radius outside the synagogue; large gatherings are prohibited within that zone. Cuomo deployed the National Guard to New Rochelle to clean public spaces and hand out food to families that rely on school breakfast and lunches, which was what they were doing at the high school.

The state has also set up a satellite testing site in partnership with Northwell Health at Glen Island Park, a large park four miles from the containment zone, according to a local news outlet, Talk of the Sound. Testing is available by appointment only, according to a state press release, but there is no information about how to schedule a test on the New York Department of Health website.

At New Rochelle High School, drivers seeking food sometimes didn’t even get out of the car. Air Force or Army National Guard troops asked each adult how many families they were providing for and how many children belonged to each family, and put the food in the back seat or in the trunk. The troops were wearing blue medical gloves and were declining to shake peoples’ hands.

They gave one dry goods bag per family, which contained items including rice and soup, and one breakfast bag per child, complete with food like cereal. But drivers were encouraged to come out the next day for more food if they needed. The troops were not sure how long they’d be out at New Rochelle High, but they expected more parents would come to their makeshift drive-through window in the coming days. 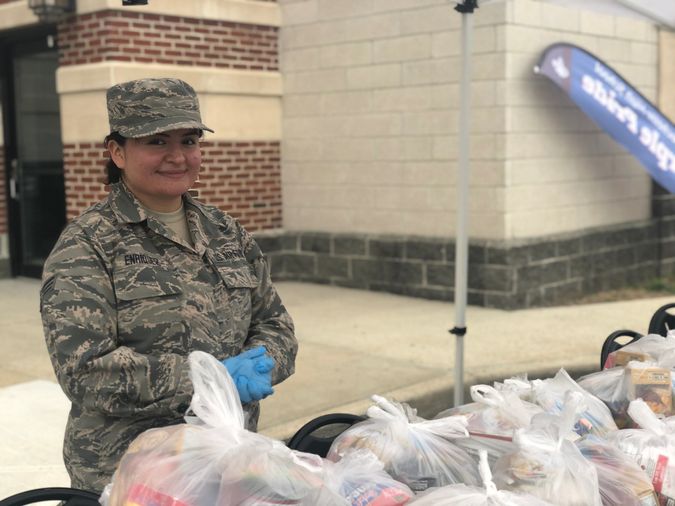 “It is our first day, and it seems like it’s been announced mostly through the City Council, but we might be expecting more as it goes on,” said Senior Airmen Paula Enriquez, 24, from Newburgh. “They’re very thankful for us being here.”

While chatter online suggested worry about the presence of the National Guard, on the ground, residents were grateful.

As of about 11:00 a.m., the National Guard at the high school had distributed 150 breakfasts and 25 of the dry-goods bags for families. They said they will be out for a week, at minimum, but their service might be extended.

Maxine, 52, a mother of five who declined to give her last name, spoke to a friend on the phone and told her to come down to the high school as the National Guard troops layered the bags into her back seat.

“I’m trying to do everything that I was told to do,” she said. “But it’s scary, because you still have to go out there.”