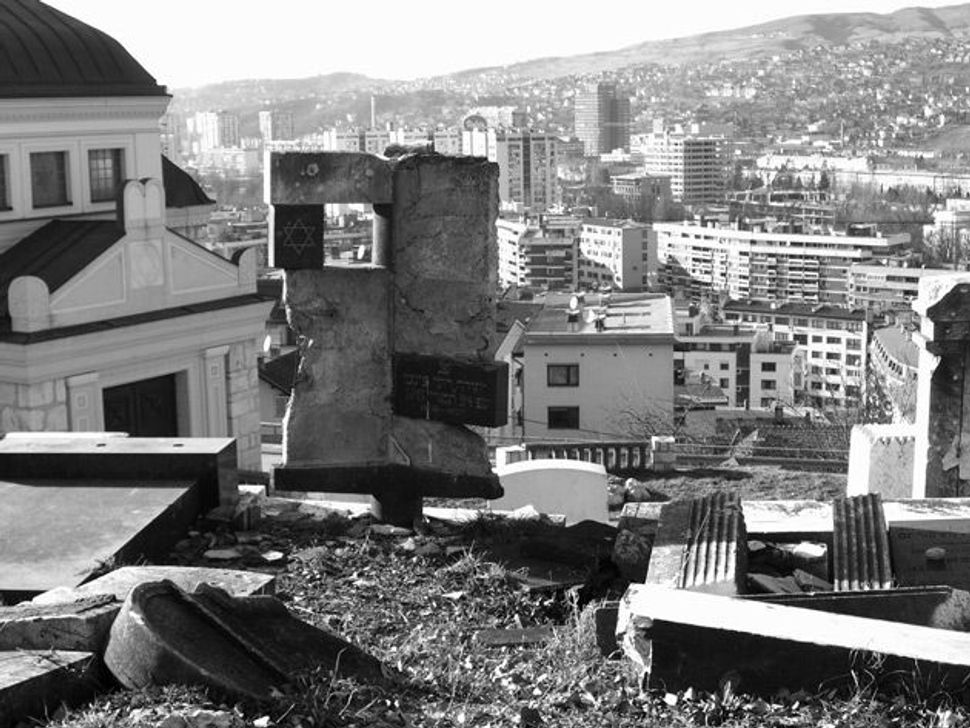 The Jewish cemetery in Sarajevo, Bosnia was on the front lines of the civil war during the 1990s. (Photo by Charles London)

When war came to Sarajevo in 1992, Vladimir Andrle was only a child. But he remembers the synagogue and Jewish community center as a refuge in a city besieged by violence.

A generation later, Andrle is a leader of the Jewish Community of Sarajevo, mobilizing relief against the novel coronavirus.

While Jews around the world are grappling with a new communal landscape shaped by this pandemic, in the Bosnian capital they are drawing on their experiences during the brutal siege that began 28 years ago — on Apr. 5, 1992 — to guide them through the chaos.

Before the Holocaust, Jews made up a fifth of Sarajevo’s population. They had been an integral part of the city since their arrival from Spain at the end of the 15th century. Now, there are barely 500 Jews among the city’s 275,000 residents, most over the age of 55.

That age bracket is the most vulnerable to the coronavirus — and to containment measures.

The Federation of Bosnia and Herzegovina, with 653 cases and 23 deaths from the virus as of April 6, hasn’t been nearly as hard hit as Italy or the United States. But the country nonetheless enacted strict measures to stem its spread.

Almost every business, save for groceries and pharmacies, has been shuttered since mid-March. The government has imposed a 24-hour curfew for those under 18 and over 65, and a nighttime curfew for everybody else. 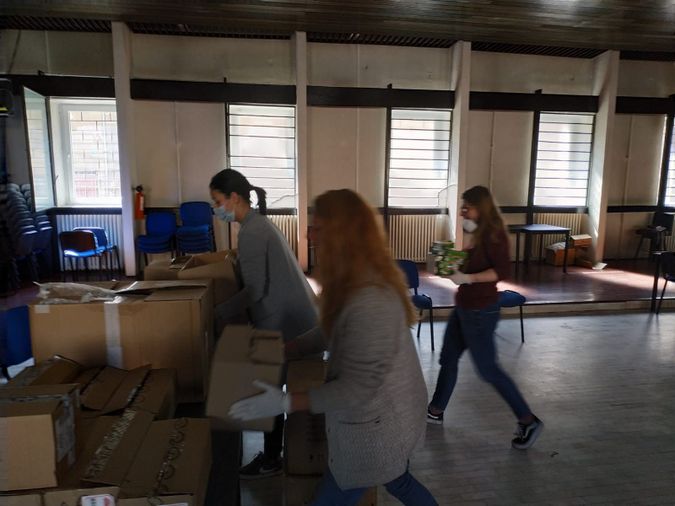 Inside the synagogue, helpers prepare meals. Image by Vladimir Andrle

That’s a problem for older Jews, many of whom don’t have younger family members nearby to help get them what they need while they are stuck at home.

“We are missing the middle generation,” explained Andrle, who sits on the Jewish community’s crisis-management team. “They are the generation who were teenagers during the war. After the war, they left Bosnia and Herzegovina and are now living all over the world,”

With a team of 24 volunteers, La Benevolencija has organized deliveries of more than 200 meals and 24 packages of groceries in the last two weeks. Now, they are digging in for the long haul.

“When the war started in Sarajevo, we all thought it would last for a few weeks, maybe three months, but not more — it lasted for more than three years.” recalled Jakob Finci, president of the Jewish community of Bosnia and Herzegovina. “Today we make sure to be prepared at least for the next three months.”

La Benevolencija was founded in 1892 after Sarajevo fell under the control of the Austro-Hungarian empire, but most Sarajevans only became aware of it during the wars which followed the breakup of Yugoslavia.

The nearly four years of brutal siege Sarajevo suffered from 1992-1996 was the longest siege of a capital city in the history of modern warfare. During that time, La Benevolencija worked to provide shelter and humanitarian aid to as much of the city as it could.

“The war came unexpectedly and many in Sarajevo were caught by surprise,” Finci noted. “But in the Jewish community we heard some things from our American and Israeli friends that something was coming.”

War had come first to Slovenia and Croatia, where many of the Jews were Sarajevans who had moved in Yugoslav times. Jewish leaders in Sarajevo had begun stockpiling food and medicine before the fighting hit their city.

When it did, the community used those supplies to run a soup kitchen out of the synagogue that supplied more than 320 meals a day. with the medicines, it established three pharmacies around the city. It also created Sunday school for Jewish and non-Jewish students. All was offered for free, regardless of ethnic background for the course of the war, said Finci.

With the help of the American Jewish Joint Distribution Committee, the group was also able to organize several convoys to get more than 2,000 people — Jews as well as Bosniaks, Serbs and Croats — out of the city.

As a recognisable face from the Jewish Community, Finci had accompanied the convoys on their trip from Sarajevo to the city of Split in Croatia, not far from where a refugee camp had been established by the Joint and Croatia’s Jews. On the way back he loaded the trucks with humanitarian supplies to keep La Benevolencija active.

“Sarajevo to Split, today you can reach in four hours, but during the war there were 34 checkpoints from Sarajevo to Split, held by four armies, six militias and who knows who else,” Finci recalled. He had to travel with the right documentation for each group in a different pocket so that he didn’t show the wrong paper to the wrong side.

“Thinking about it 25 years later, I feel like I was James Bond, passing through all the checkpoints with all my different papers,” finci said.

“So we have a long experience as an organization dealing with crises, and we are using the experience of our leaders who were active [during the war] for this crisis,” Andrle said.

As the threat of a 24-hour lockdown for all residents of the city looms, Andrle is working on making sure his own volunteers have the proper documentation to show police, so that they can keep making their meal deliveries.

Andrle himself was very young when the war began; he fondly remembers the activities at the synagogue, especially the Sunday school which was run throughout the siege.

“During the war in 1992, I was seven years old. I came here regularly with my parents and went to Sunday school here. When I think back about the war, I remember that I always felt safe here,” Andrle said. 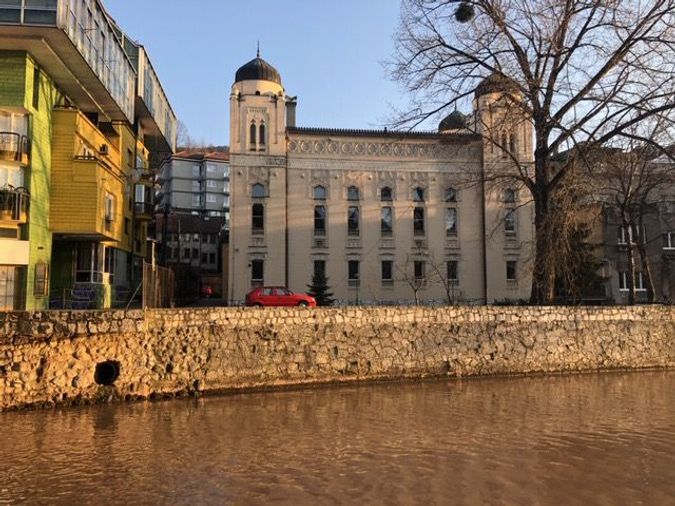 Just as it was during the siege, La Benevelencija’s assistance isn’t restricted to the Jewish community today either, but also to as many people in need whom they can help.

“All of our people working with us know that, again, we are not asking who you are or what you are, only how can we help you,” Finci said.

It’s that history of coexistence that Jewish community members cite as the reason for the relative lack of anti-Semitism in Bosnia and Herzegovina.

“They remember what we did during the war, that is why we don’t need security here,” Igor Kozemjakin said. Unlike many synagogues in Europe, in Sarajevo, there is no police protection or armed guards, only an often open gate.

Sarajevo has no rabbi. As the volunteer cantor in Sarajevo’s sole active synagogue, Kozemjakin is the closest thing. While La Benevolencija works to take care of the community’s physical needs, he is looking after the spiritual needs of the Jewish community. 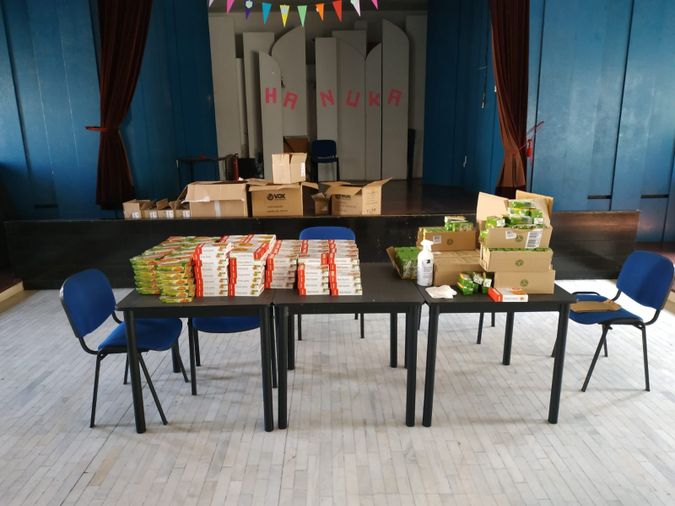 Meals and supplies ready to be distributed. Image by Vladimir Andrle

Though early on the decision was made not to conduct minyanim (prayer services) or any in person activities in the synagogue, Kozemjakin doesn’t like to describe it as “social distancing.”

“What I am doing now is calling the members of the minyan, trying to just be there for them. This is what they miss the most, just the warm words and socialization of the synagogue.”

But Finci said things will of course be a little different this year.

“For this Passover, we are taking a sentence from Yom Kippur, not just, ‘Next year in Jerusalem,’ as we traditionally end the Haggadah, but also, “May you be inscribed in the Book of Life.’”

David Ian Klein is a journalist based in New York and doing a fellowship in Sarajevo, where he is now sheltering in place. Follow him on Twitter @davidianklein