Meet the (Jewish) mayor in the middle of the Minneapolis maelstrom 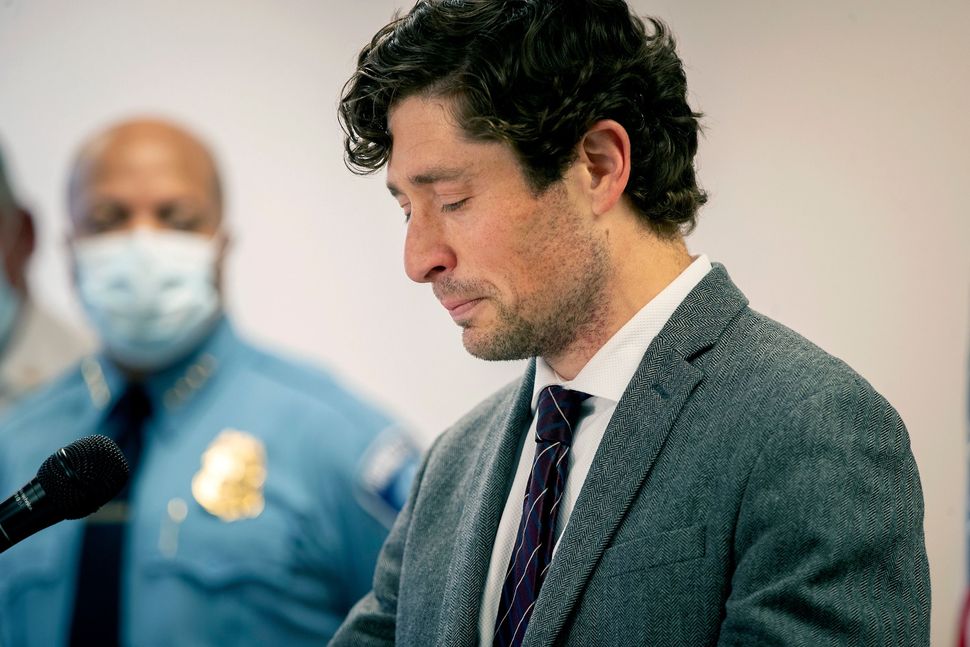 Minneapolis Mayor Jacob Frey is at the center of the country’s most dire protests in years. Following the police killing of George Floyd, an unarmed black man arrested for apparently trying to make a purchase with a counterfeit bill, thousands of people have looted and burned buildings in Minneapolis and St. Paul, including a police precinct.

Frey, a Jewish former city councilmember, is two years into his tenure as mayor, and has captured national attention for forcefully pushing back against President Donald Trump’s statements about him and his city. He has also won praise for sharing his outrage that the police officers involved in Floyd’s death have not been arrested while calling for an end to the destructive protests.

He added that though he understood the protesters’ “pain and anger,” he supported deployment of state police and National Guard troops to quell the uprising. “We need to make sure that people are looking out for our city right now.”

On Friday morning, however, Frey came under fire in a news conference for not supplying National Guard troops with a specific mission for preventing widespread property damage. Minnesota Governor Tim Walz said that the state had assumed control of patrolling the city.

“If this would have been executed correctly” state assistance would not have been needed, Walz said. “You will not see that tonight. There will not be a lack of leadership.”

The active general of the Minnesota National Guard just said he never got a clear directive from the city of Minneapolis over what his team needed to do last night.

Frey, who moved to Minneapolis in 2009, after law school, is a strong cultural Jew, whose mother always lit Shabbat candles on Friday evenings and served bagels and lox on Sundays. He has made appearances at Jewish-Muslim solidarity events co-hosted by Jewish Community Action, a social-justice group, and is on the board of directors of the Jewish Community Relations Council of Minnesota and the Dakotas. 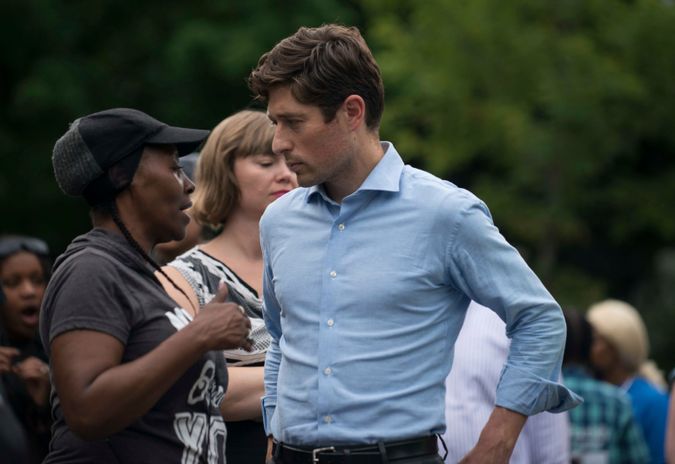 Frey at a vigil, in June 2018, for Thurman Blevins, a black man who was shot and killed by Minneapolis police officers. Image by Getty

The mayor said Friday morning that he had made the decision several hours before to evacuate the Third Precinct building — where the officers involved in Floyd’s death were stationed — after it became clear that those working inside would be in danger if they stayed, due to intensive protests outside. The building later burned down.

Minneapolis Mayor Jacob Frey addresses the burning of a police precinct amid protests over the fatal arrest of George Floyd: “The symbolism of a building cannot outweigh the importance of life, of our officers or the public.” pic.twitter.com/ALUNx4yfcU

Earlier this week, Frey called for the arrest of the four officers involved in the death.

BREAKING: Minneapolis Mayor Jacob Frey calls for officer seen in video with his knee on George Floyd’s neck to be charged. Floyd died shortly after the incident. “If you had done it, or I had done it, we would behind bars right now.” https://t.co/C7llqjXlBU pic.twitter.com/QyisDvqKRf

At the Wednesday news conference, Frey also took up a tweet from Trump in which the president advocated violence against the protesters and said that Frey was a “very weak Radical Left Mayor” who was showing “a total lack of leadership.”

In response, Frey said: “Weakness is refusing to take responsibility for your own actions. Weakness is pointing your fingers at somebody else at a time of crisis. Donald Trump knows nothing about the strength of Minneapolis.”

It’s not the first time Frey has been targeted by the president. After previous tweets from Trump Frey said he received anti-Semitic threats, and that his wife, who is not Jewish, was singled out in some anti-Semitic online comments that claimed she was “hiding her identity.”

Though not deeply religious, Frey has a strong Jewish cultural identity, which he credits largely to his mother, who was born Jewish (his dad converted). “Bagels and lox on Sunday wasn’t an option: we did it, my,” he told TCJewfolk, a Twin Cities Jewish news outlet, in 2017. “My mom lived by it.”

Asked about his favorite Jewish holiday, Frey answered “Thanksgiving” — he said he combines it with Jewish prayer and singing and dancing,

Judaism for Frey’s mother, he said, was firmly holding onto traditions like lighting candles on Friday evenings: “We’ve done it for hundreds of years, you’re going to do it, too,” he quoted her saying.

Meet the (Jewish) mayor in the middle of the Minneapolis maelstrom