Meet The Jewish Mayor Trump Attacked, Who Is Now Being Called A ‘Sex-Symbol’ 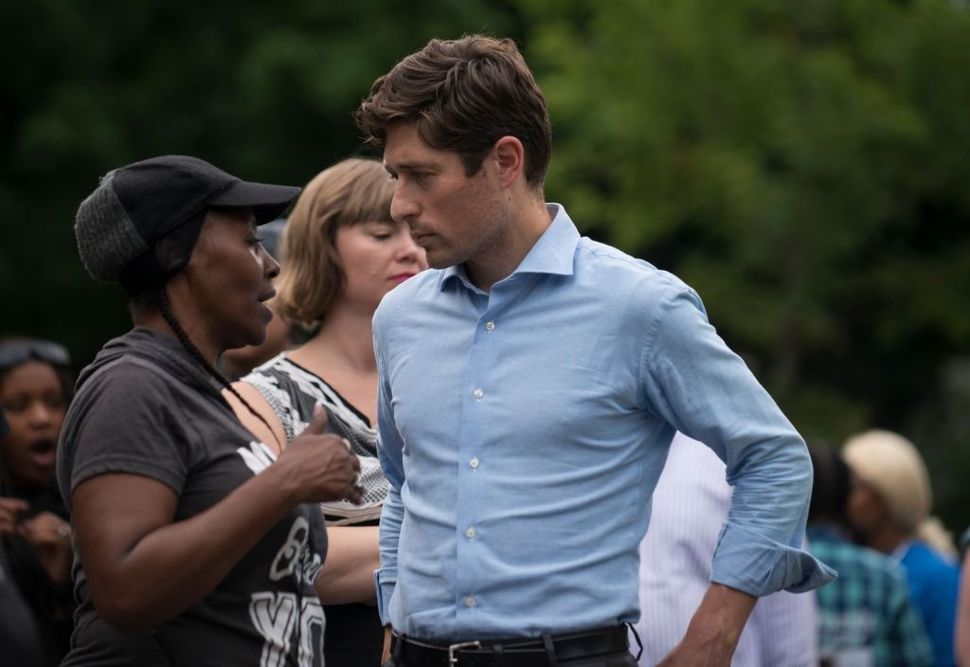 Pick your jaw up off the floor, kindly place your tongue back in your mouth, and for God’s sake stop salivating — that’s a public official you’re ogling.

Due to the actions of the President of the United States, it has been brought to our attention that Minneapolis Mayor Jacob Frey is gorgeous.

The 38-year-old mayor and former professional runner jogged into the national spotlight this week when he became the subject of a critical tweet by President Trump. “The lightweight mayor is hurting the great police and other wonderful supporters. 72,000 ticket requests already. Dump Frey and Omar! Make America Great Again!” Trump tweeted on Tuesday morning. He followed up that same day, writing, “Radical Left Dem Mayor of Minneapolis, Jacob Frey, is doing everything possible to stifle Free Speech despite a record sell-out crowd at the Target Center.”

Dump Frey? Sadly for this single Jewish journalist, he is married. But here’s the story behind the tweets:

The president has a rally scheduled this week at Minneapolis’ Target Center. After city officials told the center that the city would not pay the estimated $530,000 fee for rally security, the center threatened to cancel the event unless the Trump campaign paid, prior to the rally, The Minneapolis Star Tribune reports. (The Trump campaign has a history of sticking cities with security bills; ten cities say Trump owes them money — this is something both Democrats and Republicans have done in the past, notes the Center for Public Integrity.) Campaign manager Brad Parscale called the city’s choice “an outrageous abuse of power by a liberal mayor trying to deny the rights of his own city’s residents just because he hates the President,” and accused Frey of “looking to beef up his résumé.”

Another year begins, another chance to break the fast at Sam and Sylvia’s. Leaving with a full heart and fuller stomach. G’mar Tov! pic.twitter.com/uqnrZrkPW5

Speaking of beefing up! Frey, who took office last January after a stint on City Counsel, is a lawyer and marathon runner who used to run professionally and worked as a community organizer. The immense signal-boost he received from the President has brought on attacks on his identity as well as censure and praise. “I’ve received everything from anti-Semitic rhetoric to threats, and it it’s disconcerting to say the least,” Frey told the Daily Beast on Yom Kippur. (Later in the day, he found time to caption a tweet, “Another year begins, another chance to break the fast at Sam and Sylvia’s. Leaving with a full heart and fuller stomach. G’mar Tov!”) His wife Sarah Clarke, he noted, was also subject to anti-Jewish hatred, picked out by commenters who claimed that she must be “hiding her identity.”

Hard to imagine why you would hide a binding contract to share life and love with Frey, who the Daily Beast accurately noted looks like “Timothée Chalamet playing Justin Trudeau in a biopic from 10 years in the future.” Frey has the demeanor of a college student body president, the chest of “Smalleville”-era Tom Welling, and, best of all, the eyebrows of a young Eugene Levy. Witness their dexterous climb up his forehead as he proclaims, “I’m a proud patient at Planned Parenthood!”

Went to Planned Parenthood’s groundbreaking on their new facility. In Minneapolis, we support a women’s right to choose and access to all types of healthcare for men and women.

When Frey ran through the Minneapolis Pride Parade high-fiving constituents, his lower half was shod in jorts (jean shorts). “I have a couple of different pairs now, and you roll them at a different level for different occasions,” he told the Daily Beast.

Do we objectify? So we objectify. Jewish men are treated by our culture as weak, emasculated, and undesirable. It’s the kind of painful stereotyping that gets played for laughs on prime-time TV but comes from the same wellspring of anti-Jewish hatred shared by white supremacists and Nazis. Never mind Armie Hammer, Drake, Adam Levine, Adam Brody, Lenny Kravitz, and Jeff Goldblum. Never mind the fact that Western ideals of conventional beauty are based on people who are ethnically Western European.

Jewish men receive regular cultural messaging that they’re gross. So hell yeah, we’re going to celebrate this steaming hot knish of a mayor. You know what? Jared Kushner’s pleasant-looking, too. Yeah, we said it.

Frey has maintained that the city will not pay the security bill, and responded to Trump’s tweets with: “Yawn…Welcome to Minneapolis where we pay our bills, we govern with integrity, and we love all of our neighbors.”

Dare we suggest he was channeling the famous injunction from Leviticus to “Love your neighbor as yourself”? We do dare. If Frey can wear jorts, we can be brave, too.

Meet The Jewish Mayor Trump Attacked, Who Is Now Being Called A ‘Sex-Symbol’