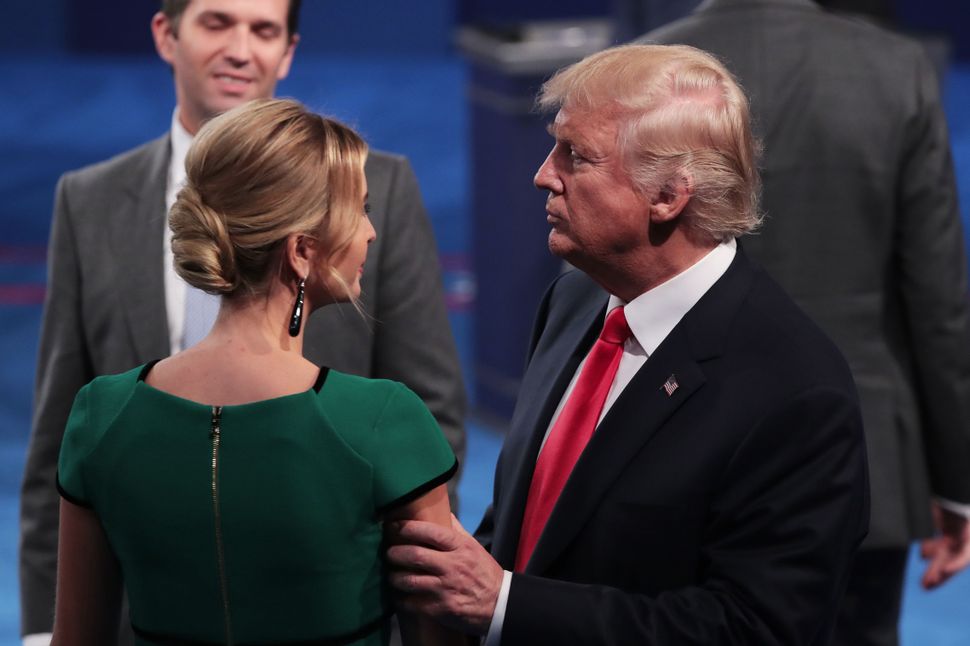 Stormy Daniels told “60 Minutes” that Donald Trump buttered her up for sex by telling her that she was super-smart, just like his daughter Ivanka.

It might have been the most cringeworthy moment (although that’s admittedly a high bar) of the CBS News interview that 22 million Americans watched on March 25.

But veteran Trump-watchers know it’s far from the first time that our mercurial mogul-turned-leader of the free world has discussed his older daughter in offensive ways. Here are some of the Donald’s most ickiest Ivanka moments:

The anecdote that Daniels offered up to Anderson Cooper was new to some. But she was basically repeating what she told InTouch magazine in 2011.

“Daniels told a magazine six years ago that she had an affair with Donald Trump starting right after his wife Melania gave birth to their son, Barron…He told me once that I was someone to be reckoned with, beautiful and smart just like his daughter,” Daniels said.

When asked what he and his daughter both consider their favorite things, Trump answered, “I was going to say sex, but I can relate to [golf and real estate].”

#5: Would Ivanka make a great Playmate?

“Ivanka posing for Playboy would be really disappointing… not really. But it would depend on what was inside the magazine…I don’t think Ivanka would [do a nude shoot] inside the magazine, Although she does have a very nice figure. I’ve said that if Ivanka weren’t my daughter, perhaps I’d be dating her.”

“You know who’s one of the great beauties of the world, according to everybody? And I helped create her. Ivanka. My daughter, Ivanka. She’s 6 feet tall, she’s got the best body.”

Journalist Julia Ioffe’s Politico contract was terminated during the presidential transition after she tweeted, “Either Trump is fucking his daughter or he’s shirking nepotism laws. Which is worse?” The tweet linked to a report in The Hill that claimed Ivanka Trump was eyeing the White House office space traditionally reserved for the First Lady.

That evening, Ioffe posted a series of messages on her personal account, apologizing for what she had written. She later landed a new gig at the Atlantic.

It was a tasteless, offensive tweet that I regret and have deleted. I am truly and deeply sorry. It won’t happen again.

“Yeah, she’s really something, and what a beauty, that one. If I weren’t happily married and, ya know, her father….”

“Is it wrong to be more sexually attracted to your own daughter than your wife?”