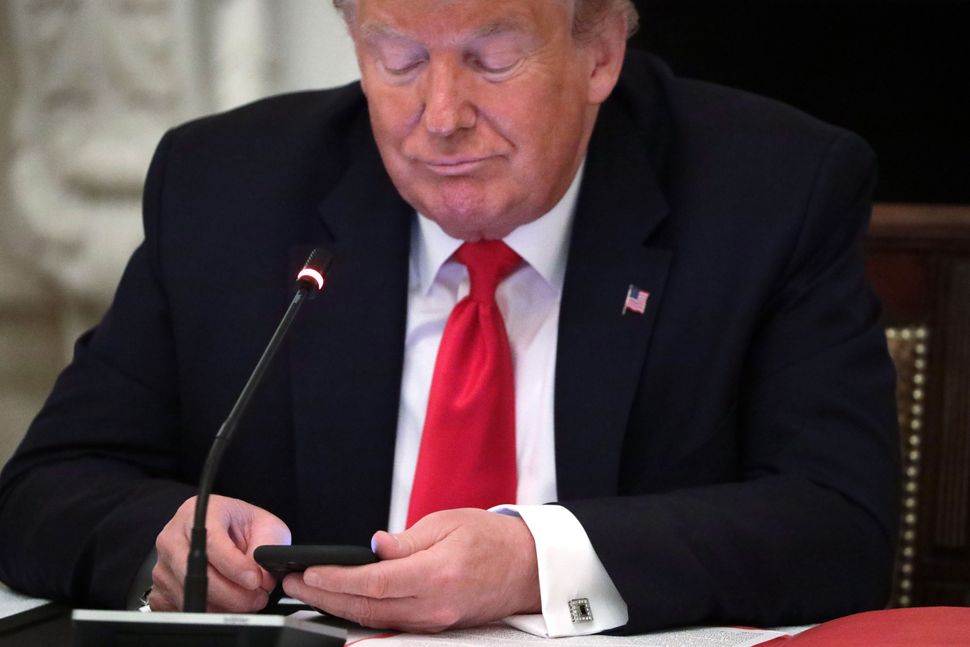 President Trump has again provided fodder for the critics who have accused him of using Nazi and anti-Semitic symbols to signal his sympathies with white nationalist supporters.

His campaign posted the latest example on Facebook on Thursday: an ad featuring an inverted red triangle — used by Nazis to denote political prisoners in concentration camps. Its first sentence had 14 words, which could be a reference to the 14-word credo of white supremacists. And and the campaign ran it 88 times. “H” is the eighth letter of the alphabet, and white supremacists use the number “88” to mean “Heil Hitler.”

“Dangerous MOBS of far-left groups are running through our streets and causing absolute mayhem,” the post begins.

The confluence of possible references to the Nazi regime and white supremacist movements set off alarm bells among Jewish groups and even at Facebook, which took the rare step of deleting the red triangle posts, saying that they violated the site’s policy against “organized hate.”

“Putting those symbols out there does dangle a certain set of possibilities in front of the public,” said Doris Bergen, a professor of Holocaust studies at the University of Toronto. “It’s a deliberate provocation, that’s for sure. Is it a sign that the next thing is mass arrests? Not necessarily.” 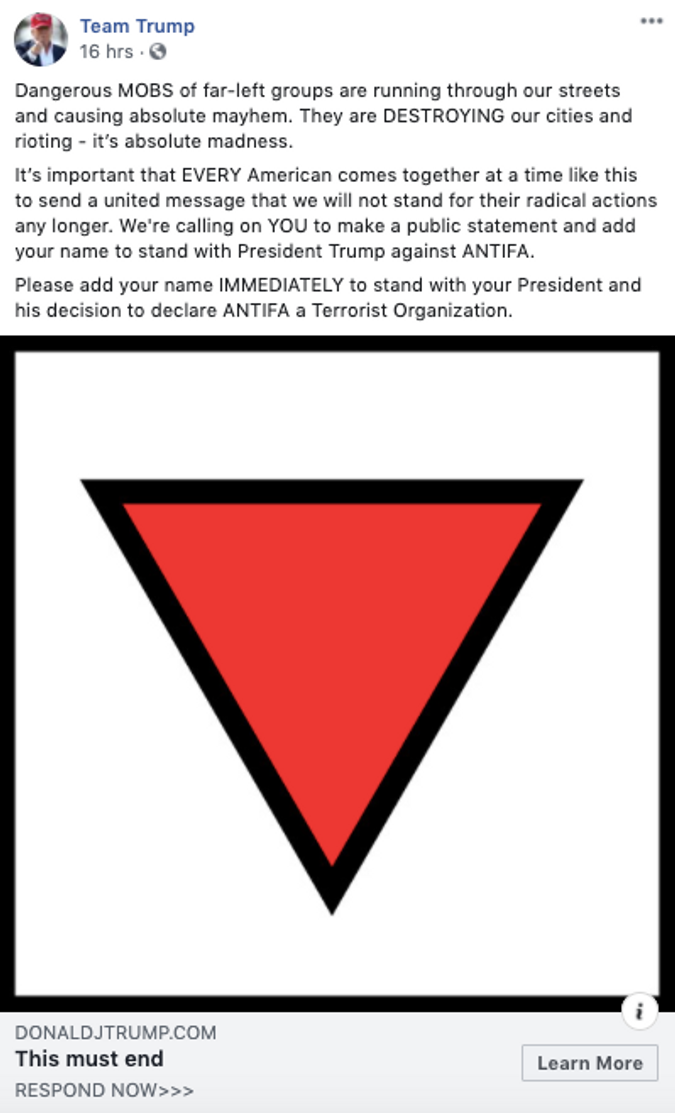 In its defense of its use of the triangle symbol, a Trump campaign spokesman claimed the red triangle was an Antifa symbol, and pointed to the fact that the red triangle is not in the Anti-Defamation League’s database of hate symbols. In an email, an ADL spokesperson answered that their database is made up of hate symbols used by white supremacists and extremists in the United States, not historical symbols used by the Nazi regime.

In a statement, ADL CEO Jonathan Greenblatt called the use of the triangle “offensive and deeply troubling.”

“We implore the Trump campaign to take greater caution and familiarize themselves with the historical context before doing so,” Greenblatt said. “Ignorance is not an excuse for appropriating hateful symbols.”

Bergen, the professor of Holocaust studies, said that the use of the red triangle was most pernicious not simply because it harkens back to Nazism and concentration camps, but because of the moment in Nazi history it represents.

Most Jews are familiar with the yellow star patches that Nazis forced Jews to sew into their clothes. But those were not required in Germany until 1941.

When Hitler moved to seize dictatorial power in Germany in February 1933, the first people arrested en masse were communists, suspected communists and their supporters, she said. They were rounded up in the first concentration camp — Dachau — and labeled with the red triangle. With the communist members of the German parliament imprisoned, Hitler’s legislative allies were able to pass a law that gave him near-complete control of what had until recently been a free German society.

“It’s a political symbol of a means that was used to crush a democratic process,” Bergen said of the triangle.

Allegations that Trump’s presidential campaign has used images tied to anti-Semitic conspiracies and Nazism have dogged him since 2015. In July of that year, he ran an ad that used a stock photograph of Nazi soldier re-enactors in a place that many would have expected to see American soldiers: layered under the American flag. Trump said the image was the fault of a “young intern.”

In 2016, Trump tweeted an image of Hillary Clinton’s face superimposed over a pile of money with a six-pointed star — often identified by Jews as a Star of David — that contained the words “Most Corrupt Candidate Ever!” The graphic had been shared on a Nazi internet forum, and critics considered it a “dog whistle” to white supremacist supporters. Trump defended the tweet by saying that the star could have been a Sheriff’s star or a “plain star.” He later used a poster of graphic earlier shared by David Duke, a former Klu Klux Klan leader and anti-Semite.

More examples have cropped up during his presidency. In August 2019, his official Twitter account posted a video supporting his reelection campaign that featured a stylized lion icon, one tied to the white nationalist website VDARE and white supremacist groups.

In May, he praised the “good bloodlines” of Henry Ford, a notorious anti-Semite with strong ties to the Nazi regime.

Last week Trump referred to the Secret Service as the “S.S.”, which one Jewish group deemed a “dog whistle to white supremacists and neo-Nazis” for its apparent reference to the Nazi paramilitary police responsible for enforcing the regime’s racial policies.

In response to the triangle ad, Bend the Arc, a Jewish social justice group, noted that it was not an anomaly.

“This is dozens of carefully targeted ads from the official pages of Mike Pence, Donald Trump, and Team Trump,” the group said in a tweet. “All paid for by Trump and the Republican National Committee. All spreading lies and genocidal imagery.”

Defenders of the president have maintained that the red triangle is an Antifa symbol. Some people aligned with Antifa carry a flag used by anarchist movements, which is solid red and black, bisected on the diagonal, creating one red and one black triangle. One Antifa Facebook page, based in Utrecht, in the Netherlands, has a red triangle in its logo.

This is an emoji. ? It’s also a symbol widely used by Antifa. It was used in an ad about Antifa. It is not in the ADL’s Hate Symbols Database. pic.twitter.com/SLEsSdLu3y

“Antifa has been and is very threatening to Jewish houses of worship and schools, et cetera,” Menken said. “The fact that Trump is fighting so hard against Antifa is only to the benefit of the Jewish community.”

Menken defended the six-pointed star and “S.S.” tweets as well, saying they were mistakes — and that these tweets would not affect Trump’s support in the Orthodox Jewish world, were Trump enjoys a nearly 90% approval rating.

Among Trump’s most vocal critics, however, the red triangle ads have stoked fear that his actions mirror those of Hitler.

Bergen said that she felt that that kind of thinking — whether Trump is provoking it, or people are just scared — is a historical trap, and his critics need to focus on the present.

“What makes history so terrifying is that you don’t know what’s gonna happen next,” she said. “It’s like, let’s get people fussed up and talking about, ‘Oh my God, is Trump Hitler?’ When what we really need to be scared of is, who is Trump?”