This Yom Kippur, Istanbul’s Karaites look back on a proud past and forward into an uncertain future 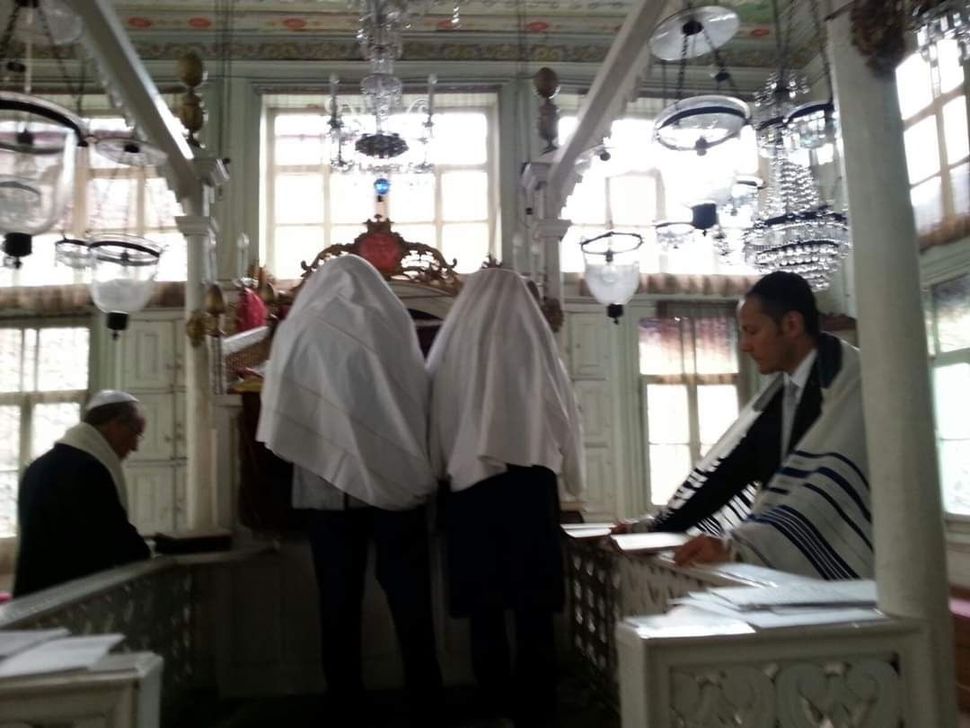 Worshipers at the Karaite Qahal in Istanbul’s Haskoy neighborhood. Image by Avraham Ishdjen

Will one of Judaism’s oldest communities survive another generation?

For the past two years, the Karaite Qahal in Istanbul’s Haskoy neighborhood has been almost empty for the High Holidays. This Yom Kippur will likely be no different. For an overwhelmingly elderly community, the novel coronavirus pandemic hasn’t helped, nor has the fact that in 2017, they lost a beloved cantor.

Karaism is one of the oldest denominations of Judaism and separates itself from Rabbinic Judaism by rejecting the very idea of rabbinic law or an oral Torah as transmitted through the Talmud.

As such, followers acknowledge patrilineal, rather than matrilineal, descent when defining who is a Jew, and have many divergent practices such as praying without shoes and with full prostration.

There are some 40,000 Karaites today, mostly in Israel but also with notable communities in Lithuania, Crimea, Poland and outside of San Fransisco in the United States.

Though there is some debate on its origins and various sola scriptura groups have existed throughout Jewish history, the most widely held origin story traces Karaism and rabbinic Judaism’s split to the 9th century and a dispute between two brothers, sons of the rosh galuta or exilarch who lead the Jewish community in Babylon and later the Abbasid empire.

A Karaite community has existed in Istanbul for almost as long.

The current state of the community hasn’t always been the case. In years past Istanbul had been a major center of the Karaite world, so much so that one of Istanbul’s hippest neighborhoods still bears their name today. Karakoy, which sits just across the Golden Horn from old Constantinople, literally means dark village in Turkish, but is likely a corruption of Karaykoy, meaning village of the Karaites, known as Karay in Turkish.

“It’s an oral tradition,” acknowledged Avraham Ishdjen, who grew up in the Karaite community in Istanbul. “but what we know from our fathers and grandfathers is that there were once 85 Karaite communities in Turkey.” The largest of those was in Constantinople, or as it was known in the Karaites’ languages, Kushta.

By the height of the Ottoman era, Constantinople was the capital of an empire that bridged the other centers of the Karaite world, Egypt, Crimea and Syria. Those traditions have influenced Istanbul’s community and several languages are spoken by its less than a hundred members. Those whose families have been in Istanbul since Byzantine times, known as Constantinoplian Karaites, speak a language called Karaitika or Kareao-Greek, a form of ancient Greek mixed with Hebrew, Aramaic, Latin and Turkic influences. 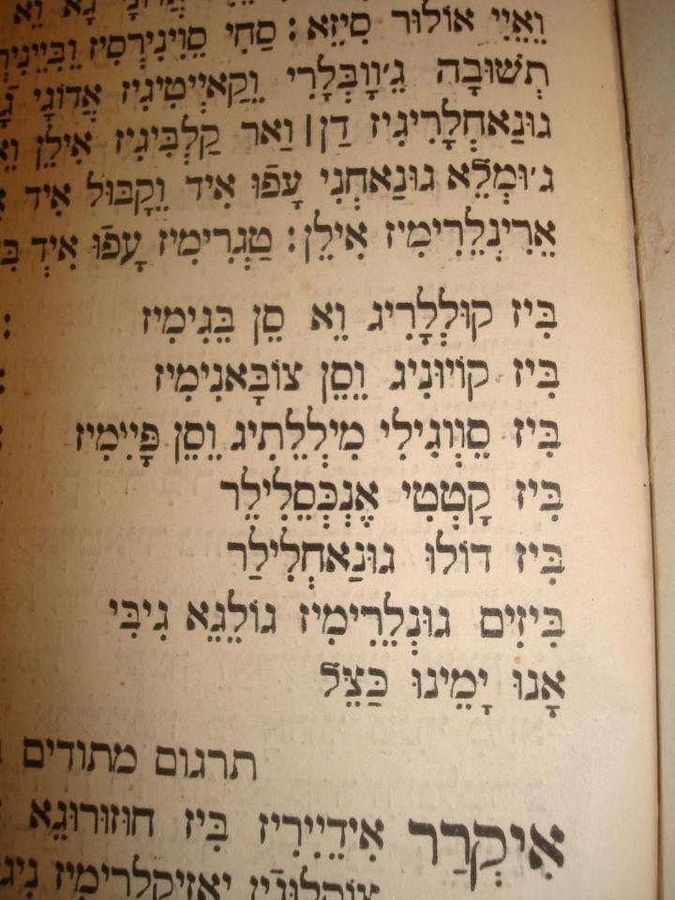 Yom Kippur prayers in Qarayca, the Judeo-Turkic language of the Crimean Karaites. Image by Avraham Ishdjen

However today, the majority of Istanbul’s Karaites, are descended from Crimean immigrants who came over around the time of the Bolshevik Revolution in Russia. They speak a Judeo-Turkic language called Qarayca or Qaraim.

The Crimean Karaites believe themselves and their language to be the descendants of the Khazar Khaganate, a medieval Turkic empire which stretched from the Ukrainian steppe, across the Caucasus Mountains and into Central Asia as far as modern Kazakhstan. Sometime between the 8th century and 10th century, shortly before their civilization was conquered and dispersed by the nascent Russian empire, the Khaganate’s nobility converted to Judaism.

Little is known about what Khazar Judaism looked like, but Crimea’s Jewish communities, both Rabbinite and Karaite, provide possible hints.

This year, on Rosh Hashana, or Yom Teruah as it is known to Karaites, only a small handful of worshippers, less than 10, came to the Qahal, the Karaite term for a synagogue. On Yom Kippur it will likely be the same while For Sukkot and other holidays, it is unlikely the building will be opened at all this year.

Like every Jewish community in the world, the turnout this year was affected by the novel coronavirus pandemic, but Ishdjen also believes it has also been low in recent years due to the loss of the cantor.

“He was an old Istanbulite gentleman who knew how to joke and how to motivate people to come,” Ishdjen recalled. Explaining that for him, that the cantor was like a walking library of their history.

“He grew up around the hakhams” said Ishdjen, using the Karaite term for rabbi. “He was the one who knew our tradition very well, he knew it from his childhood, a time when the community was much more organized.” 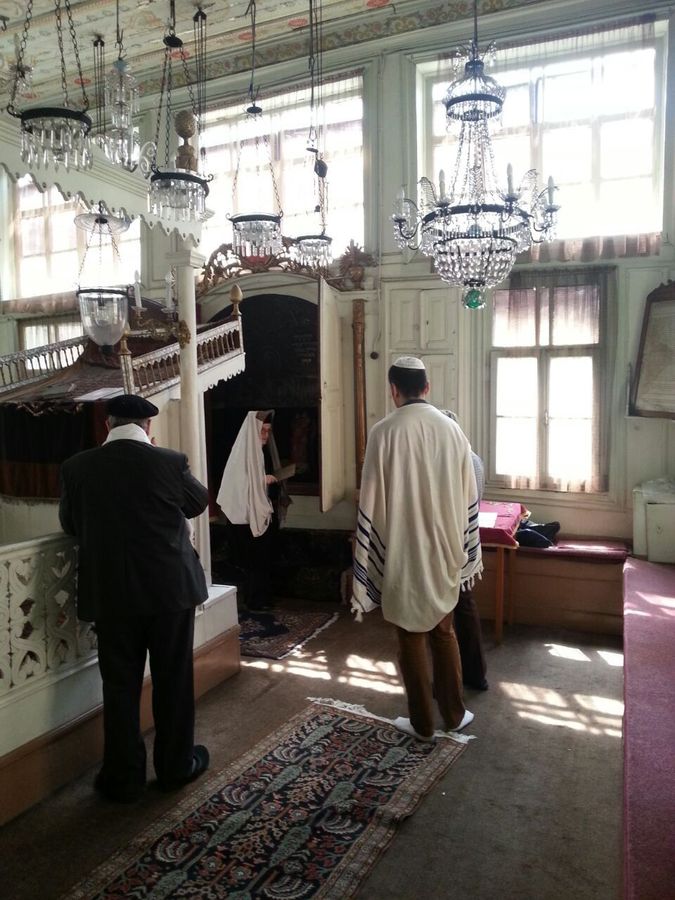 Worshipers at the Karaite Qahal in Istanbul’s Haskoy neighborhood. Image by Avraham Ishdjen

In that time, more than half a century ago, life in the community looked very different to today.

“When I was a child in the qahal, it was full, 100, even 120 people coming, the community was that big.” Said Mihael Orme, who is 87 years old and serves as president of Istanbul’s Karaite community.

Nonetheless, emigration, assimilation and secularization has whittled down the community.

Without enough young people, most youth intermarry either with Turkish Muslims or occasionally Istanbul’s Rabbinite Jews. Turkey’s secularization over the course of the 20th century also affected the Karaite community as it did all of Turkey’s religious communities, and like Turkey’s Rabbinite Jewish community the establishment of the state of Israel led to significant emigration.

Today there are no more hakhams in Istanbul, though the community was once home to scholars and theologians such as Aaron ben Elijah, a contemporary and Karaite equivalent to Maimonides.

Even a few years ago though, dozens still attended the Qahal on holidays, and the occasional Shabbat drawn by the cantor’s energy. “He was an old man, but 80% of the energy in the Qahal came from him.” Ishdjen said.

As the community dwindles, the same is true of their languages. While Qarayca, has many native speakers and in its heyday, had a robust printed culture with many books for scholars to study, if the last of the Constantinoplian Karaites die out, there will be little left to remember Karaitika.

“What will happen in 50 years? I can’t answer. We are so few it will be difficult for us to continue, but we aren’t interested in fusing with the [Rabbanite] Jews of Istanbul, our traditions are too different,” said Orme. “Maybe someday there will be no one to fill the Qahal, for us though, until our last person, we will continue to keep our religion and traditions.“

This Yom Kippur, Istanbul’s Karaites look back on a proud past and forward into an uncertain future