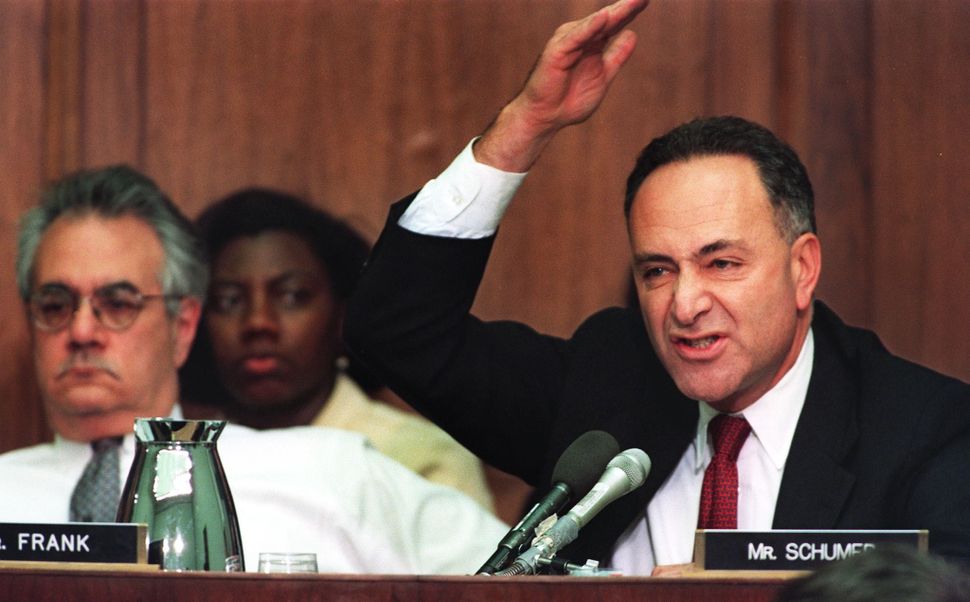 Then-Representative-elect Charles Schumer (D- NY) argued for a no-vote on the first article of impeachment presented during the Clinton impeachment hearings on Capitol Hill in Washington, DC. Photo by PAUL J. RICHARDS/AFP via Getty Images

Schumer has come a long way.

Now, after victories for Jon Ossoff and Raphael Warnock in competitive Senate runoffs in Georgia, Schumer — whose career took off from the depths of dirty Holocaust digs and Yiddish swears — will become the first-ever Jewish Senate Majority leader.

“The fact that he will be elevated to that position by the victories of a Jewish and Black candidate in the South should give us all hope for a more just world,” said Rob Raich, a longtime former president of Schumer’s Park Slope synagogue, Congregation Beth Elohim, in an email. “I believe Senator Schumer will be a strong leader of our country and its constitution, and a staunch defender of Israel and the Jewish people.”

Schumer’s political career started inauspiciously. The son of an exterminator in Flatbush, Brooklyn, he lost his bid for the presidency of his junior high school, but rose to the top of his class at James Madison High. Schumer’s neighbor was Stanley Kaplan, later the founder of a test-prep empire, and Schumer spent hours mimeographing practice S.A.T.s.

He won admission to Harvard, where he started in 1967, and established a reputation for moderation — political and otherwise. He did not smoke marijuana or wear jeans, according to his friends.

During his run for senator, his Jewishness became a source of controversy.

“Senator, did you call Congressman Schumer at ‘putzhead’?” a reporter asked D’Amato.

New Yorkers debated — Did D’Amato mean “fool” or “penis-head”? Was this a disqualifying offense? — and discussed a previous gaffe during which D’Amato accused Schumer of not caring about the Holocaust because he missed a votes related to Holocaust victims and commemorations (Schumer’s great-grandmother and seven of her nine children were killed in the Holocaust). Then-New York State Assembly Speaker Sheldon Silver accused D’Amato of running antisemitic attack ads that portrayed Democrats from New York turning into sharks, swimming upstate and eating taxpayers’ money.

Al D’Amato vs. Chuck Schumer
At 10:20 debate focuses on use of Yiddish word “putz” …
Pressman: “Have you ever called anyone a putz yourself?”
Schumer: “I may have, but I wouldn’t lie about it”https://t.co/6XXl6AFM9n pic.twitter.com/DbHKwpRxwv

This very Jewish political back-and-forth upended D’Amato’s campaign and drove Schumer to a two-decade-long tenure in the Senate.

“Senator Schumer, like me, believes in the values of Tikkun Olam – repairing the world,” said Sen. Jacky Rosen of Nevada, who is Jewish, in an email. “During a period of increased antisemitism and bigotry, this newly broken barrier also gives a signal of hope and resilience to those looking to fight back against hate in all its forms.”

Schumer was known earlier in his career for his cozy relationships with Wall Street bankers, his role in writing the 1994 crime bill, his “yes” vote for the Iraq War and his opposition to the Iran nuclear deal during Barack Obama’s presidency and other pro-Israel stances — opposition to the Boycott, Divestment and Sanctions movement and support for the Taylor Force Act, which bars American money from flowing to the Palestinian Authority as long as it provides financial support “for acts of terrorism against U.S. and Israeli citizens,” says the bill. He also supported moving the U.S. embassy to Jerusalem.

On issues besides Israel, he’s adapted to the shifting ground beneath his feet, the result of shock waves triggered by colleagues like Rep. Alexandria Ocasio-Cortez of New York.

Nowadays, his priorities include “income and wealth inequality, climate, racial justice, health care, and improving our democracy,” he told Politico in August. He’s kept Democrats on a short leash and ensured consensus on issues like the Obamacare repeal, Trump’s impeachment trial and coronavirus relief. He’s earned praise from colleagues across the ideological spectrum, including Sen. Bernie Sanders of Vermont and Sen. Elizabeth Warren of Massachusetts.

Schumer is old-school and nebbishy in more ways than one — besides sometimes eating cold cereal for dinner and matching his green kippah to his daughter’s shoes at her wedding, he established a tradition during that first year in the Senate, visiting each of New York’s 62 counties every year. He managed to pull it off again in 2020 despite the pandemic. He takes his parents to Stella Ristorante, an Italian joint in Floral Park on Long island to “take the temperature” of the “very middle class” patrons, he told the New Yorker in 2017.

Schumer has been building toward this moment since 1998. But besides a new schedule and a new title, he is dealing with a new party. Fractures among members on issues like health care and yes, Israel, will test his ability to build consensus without the uniting force of Donald Trump.

Schumer’s appearance on a conservative Jewish talk radio show in 2010, the Nachum Segal Show, about the Obama administration’s effort to pressure Israel regarding negotiations with the Palestinians offered a window into Schumer’s rigidity on Israel.

“I called up the White House and I said, ‘If you don’t retract that statement you are going to hear me publicly blast you on this,’” he said.

But if history is a guide, there’s no question Schumer will push back.