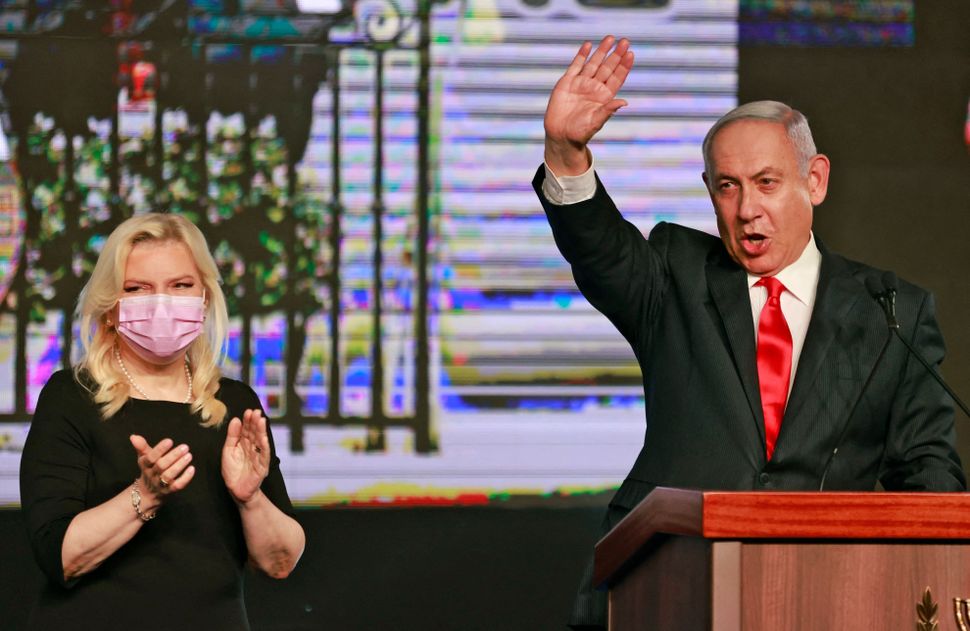 Israeli Prime Minister Benjamin Netanyahu, leader of the Likud party, appears with his wife Sara to address supporters at the party campaign headquarters in Jerusalem. Photo by Menahem Kahana/Getty Images

The television exit polls show that the main event of the past year – the coronavirus – didn’t influence Israeli voters at all.

What hasn’t happened to us since the last election? Lockdowns, quarantines, more than 6,000 deaths, face masks, cellphone tracking by the Shin Bet security service, huge deficits, soaring unemployment, Saturday night demonstrations and a closed airport. And all this was on top of an intensifying political crisis.

Nevertheless, at the polls, we were left with the same yes-Bibi/no-Bibi. All that happened was that the internal composition of the blocs changed.

The voters didn’t settle accounts with Prime Minister Benjamin Netanyahu for his flawed, flip-flopping management of the entire coronavirus crisis. Nor did they reward him with enthusiastic support for having obtained the vaccines that ended the lockdowns.

The changes in the political map stemmed solely from the relationships between other politicians and Netanyahu. These were the reason for the splits in Likud, Labor, the religious Zionist right, the Joint List and Kahol Lavan. The coronavirus played almost no role in politicians’ rise and fall in this election.

So what did? As always, this time, too, voters were motivated at the polls by their tribal loyalties and socioeconomic class. This translated into voting “only Bibi” or “anyone but Bibi,” with Naftali Bennett – who tilts ideologically toward Netanyahu but personally against him – as the one who could tip the scales.

Most parties’ campaigns identified the public mood and, at a relatively early stage, put the coronavirus aside and focused on sowing panic about what would happen to their bloc if the other side won. That was the message of the two surprises of the exit polls, Meretz and Kahol Lavan; both appealed to their voters’ fears. Even Bennett – who built his return to the heart of the political world on the campaign slogan “If it’s not about earning a living, it’s not interesting,” and on lauding himself as a talented manager who would know how to deal with the virus – returned to his old talking points prior to the election.

Netanyahu tried to leverage the reopening of the economy and the decline in incidence of the virus with his “Back to Life” campaign. The fact that a majority of the population has been vaccinated, allowing schools and stores to reopen, may – together with the spring weather – have saved his Likud party from defeat.

But Netanyahu didn’t win the victory he had hoped for. And if he does manage to form a governing coalition, he’ll be utterly dependent on his rival, Bennett, who will be able to topple him at any moment.

On the other hand, Netanyahu’s opponents didn’t manage to exploit his failures during the year-long coronavirus crisis to oust him. For a moment, it had seemed as if the ultra-Orthodox community’s revolt against enforcement of the lockdowns, with cover from a prime minister dependent on ultra-Orthodox support, would drive away voters who were outraged by the blatant discrimination and lead them to prefer a “statesmanlike right” to the pro-Haredi Likud. That was the hope of both Gideon Sa’ar and Avigdor Lieberman.

But this hope was disappointed because the reopening of the economy took this issue off the public’s agenda, and because Likud voters already knew their party was a loyal partner to Shas and United Torah Judaism, whose voters don’t serve in the army or study the core curriculum and, in many cases, don’t work.

Thus the coronavirus was neutralized as a factor in Israelis’ voting considerations. Instead, they went to the polls to express their tribal loyalties.

If the virus had any impact, it was in the unprecedented connection between the Arab community and the Israeli mainstream, thanks to a pandemic that hurt everyone, the prominence of Arab medical staff at hospitals and the fading of the violent conflict with the Palestinians.

Netanyahu, who understood this, for the first time campaigned in Arab towns and, at least in slogans, addressed the problems that preoccupy their residents. He thereby managed to break up the Arab parties’ Joint List – his fiercest opponent – and consequently benefited from a decline in Arab turnout compared to the two previous elections.

The visits to Nazareth, Umm al-Fahm and Bedouin tents by “Abu Yair,” as Netanyahu called himself, were the most surprising and innovative development of this election. And perhaps they even tipped the scales in favor of him remaining in power.