‘It’s going to be a rough road’: In Surfside, the Jewish community braced for bad news on a somber Shabbat 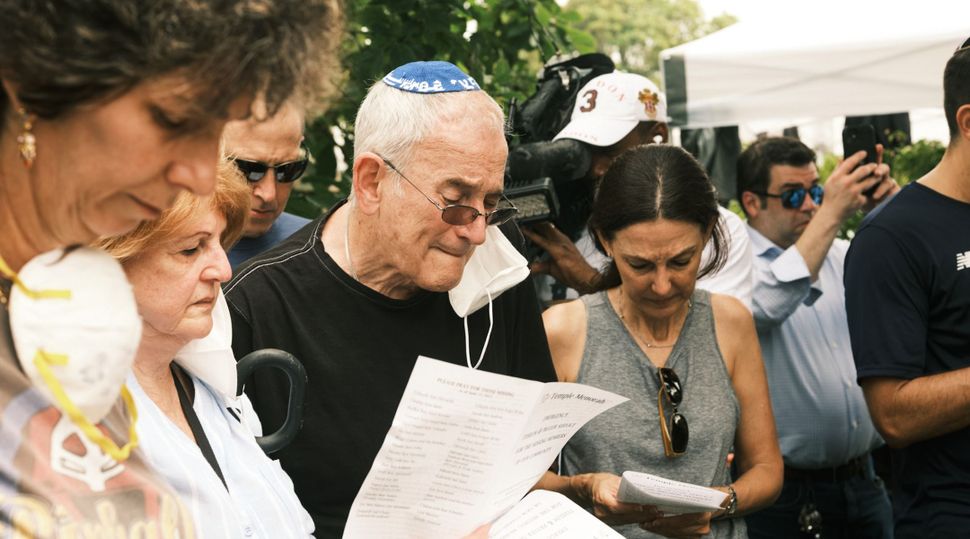 Jewish congregants in Surfside, Fla., in the wake of the collapse of the Champlain Towers, June 25, 2021. (Zack Wittman for The Washington Post via Getty Images)

SURFSIDE, Fla. (JTA) — One kind of disaster, volunteer medic Baruch Sandhaus said, has a “lot of patients” — a harrowing scene with many people and their injuries to treat.

The sudden collapse of one of the residential Champlain Towers buildings this week in Surfside, Florida, a town in Miami-Dade County with a large Jewish population, was not that kind of disaster.

“It was the minimal amount of patients,” he said.

Sandhaus has for decades volunteered with Hatzalah, the Jewish rescue organization, and the aftermath of this disaster remind him of another national tragedy.

“Unfortunately, you know, you have to start thinking of something else,” he added, referring to the Sept. 11 attacks, which killed close to 3,000 people.

The “something else,” the prospect that the 159 people known to be missing in the building collapse are likely dead, is not an outcome anyone wants to contemplate yet. But the idea haunts the blocks surrounding the building’s remains, where crowds of people waited and watched the rescuers working from a distance on Friday evening, an acrid stench permeating the air and smoke and dust carpeting the streets.

It has made for a somber Shabbat for the Jews of Surfside and the surrounding towns that make up a heavily Jewish area called North Beach, on the north end of Miami Beach. Together with the other towns of Bal Harbour, Bay Harbor Islands and Indian Creek, North Beach has about 14,000 residents, and more than 5,000 of them are Jews.

In The Shul of Bal Harbour, a nearby stately Chabad-Lubavitch synagogue where just 10 days earlier Gov. Ron DeSantis had signed a bill extending first responder privileges to private emergency responders (Hatzalah is the only faith-based private volunteer emergency service in the state, and the Orthodox Jewish community led lobbying for the bill), Friday evening prayers were quieter than usual. Worshippers mumbled about the incident on their way out of the building.

Chani Lipskar, whose husband Sholom Lipskar leads The Shul, said they know 40 of the 159 declared missing to be Jewish; Chabad is broadcasting their names for prayers.

Uncertainty also stalks the families waiting at a reunification center, set up a few blocks away from the building scene at the Town of Surfside Community Center. Shimshon Tzubeli, a cantor who has led Sephardic services at The Shul, walked through the crowd with a notebook on Friday, soliciting contact information from evacuees and volunteers to match families for Shabbat meals.

“We’re done with the questions”

Volunteers convened at the community center on Friday, called together by a WhatsApp network set up for Jewish events, said Arielle Aronson, who spent the morning Friday distributing food, bedding, and clothes to evacuees.

The tight-knit South Florida Jewish community was wired and in peak communication mode, she said.

“Our rabbis put out Instagram posts, social media, WhatsApp messages,” said Aronson, 32,  a second-grade teacher at a local Jewish day school. The network was activated most recently to counterprotest pro-Palestinian groups who came out during last month’s Israel-Gaza conflict.

“I went to all the protests, Boca, Fort Lauderdale,” she said.

The mix of people who gathered on Friday — religious, secular, Latinos, Hebrew speakers — was a perfect cross-section of the area’s diverse Jewish community. The Miami area has a large percentage of Hispanic Jews, many of whom come from families that left countries such as Cuba, Colombia, Argentina, Venezuela and elsewhere. According to demographer Ira Sheskin, the area’s Jewish community is 30% Hispanic.

A question is already surfacing about how to plan for burials of people who are not yet known to be dead, said Jacob Solomon, the president of the Greater Miami Jewish Federation.

“It’s very difficult to say it but I’m guessing that there will be a significant number of people who need help with setting up funeral arrangements,” he said in an interview.

But at the community center, many families and friends still did not want to acknowledge any finality in the situation, whispering their anxieties to one another and turning away from strangers.

“I was going to get married to his father,” said Rebecca Pollack, who was standing with him. “We’re done with the questions, we’re done, we’re done. It’s very hard for us.”

Lev Parnas — the businessman involved in Jewish causes who was charged in Donald Trump’s Ukraine scandal with campaign finance violations in an alleged bid to help reelect the former president — was on hand.

“This is my community, I’ve lived here 25 years, and when I saw what was happening I felt it was my duty to come down here and help any way I could,” he said. He came across a friend whose sister, Cassandra Stratton, was among the missing, and he began consoling her.

Staff from the Israeli consulate in Miami were present, offering guidance to Hebrew speakers. The federations deployed rabbis who work as chaplains at local hospitals to attend to the evacuees.

“It’s going to be a rough road and a long road,” said Rabbi Jonathan Tabachnikoff, a chaplain at a local children’s hospital, who approached families and asked in soft tones whether they wanted to talk. “They’re going to need counseling, they’re going to need trauma facilitators and people to help because this —  we don’t even know who to blame or what happened yet.”

Reports have emerged since the collapse that structural engineers found damage at the complex, in 2018 and previously. The building management was planning to launch repairs when the building collapsed.

In the immediate shock of the aftermath, some of the survivors described their experiences to TV crews who rushed to the scene.

Ofi Osin-Cohen, the Miami federation’s director for Jewish volunteers, lived in the building. She described on NBC’s Today Show on Thursday being awoken by a loud boom, looking out the window, seeing smoke, and then opening the door to her apartment and seeing a corridor layered with debris.

“It was just surreal, really surreal,” she said.

Osin-Cohen, her husband and some elderly neighbors tried to exit the building but couldn’t find a way out through the debris and mounting water; they returned to their apartment and firemen extracted the four people with a ladder.

In a letter to the community, Solomon said Osin-Cohen and her husband, Barry, are staying with her son and daughter-in-law in Miami.

Despite the muted feeling helped by the air’s foggy wet heat that has descended on Surfside since Thursday, the fears are occasionally made explicit.

“When the backhoes come,” said a man leaving The Shul on Friday evening, “it’s over.”

Big earthmovers throughout the scene of the incident may signal that hope for survivors has lapsed. But as long as individual searchers are still undertaking the meticulous work of picking through the rubble there is hope, however thin.

As of Saturday, passersby still search the photos of the missing plastered to a fence. Bursts of torrential rain occasionally stop the searching and send rubberneckers scattering for awnings or for their cars. Then, when the sun reemerges, they come out again.

A rescue organization founded in 2005 by the Mexican Jewish community, called Cadena, has deployed volunteers who are specialists in finding survivors. They are standing by, awaiting permission from local authorities to join in the search.

“We have a professional rescue team, they are professionally trained in Israel. We have life locator devices, rescue dogs,” said Dana Gurvich, a Cadena team leader who lives in Miami and who is originally from Mexico City. “They’re not in place because we’re not allowed to” help, pending permission from Miami authorities.

“But we’re trying to give as much support and to be as handy as possible.”

The post ‘It’s going to be a rough road’: In Surfside, the Jewish community braces for bad news on a somber Shabbat appeared first on Jewish Telegraphic Agency.

‘It’s going to be a rough road’: In Surfside, the Jewish community braced for bad news on a somber Shabbat