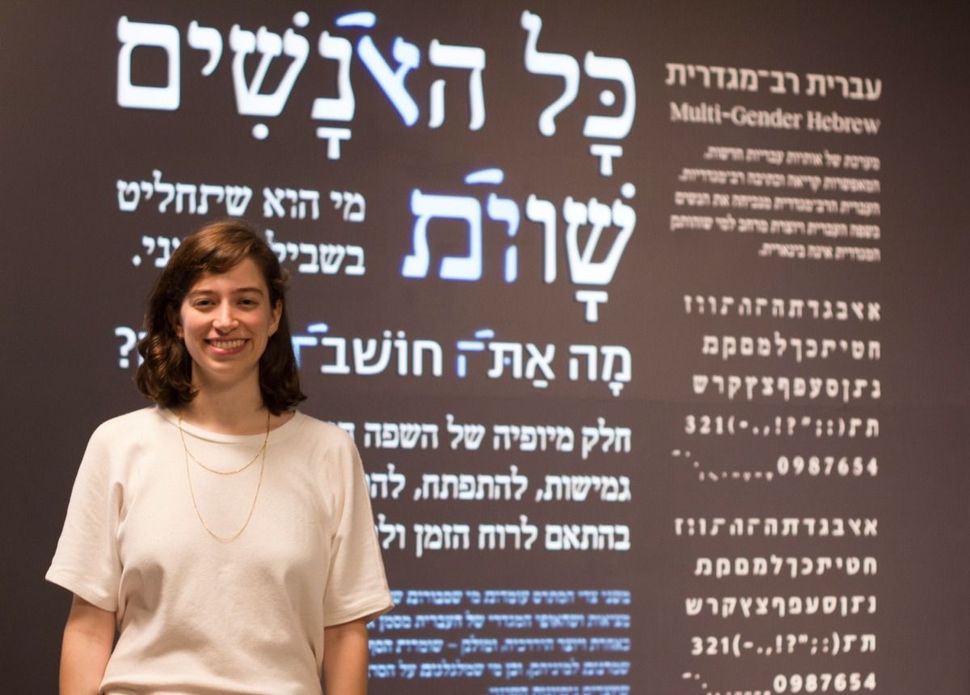 Israeli graphic artist Michal Shomer created 12 new Hebrew letters that allow the language to be read in ways that better recognize both women and non-binary people. Photo by Alon Sarid

As part of her capstone project at her Tel Aviv-area college, graphic artist Michal Shomer revamped the Hebrew alphabet — adding a dozen new letters to make the 3,000-year-old language more inclusive of both women and non-binary people.

She made what she calls multi-gender Hebrew free to anyone in the past year, and 10,000 have downloaded it from her website so far. It’s now popping up all over Israel — at secular schools, on wedding invitations and even in offices in the Knesset. 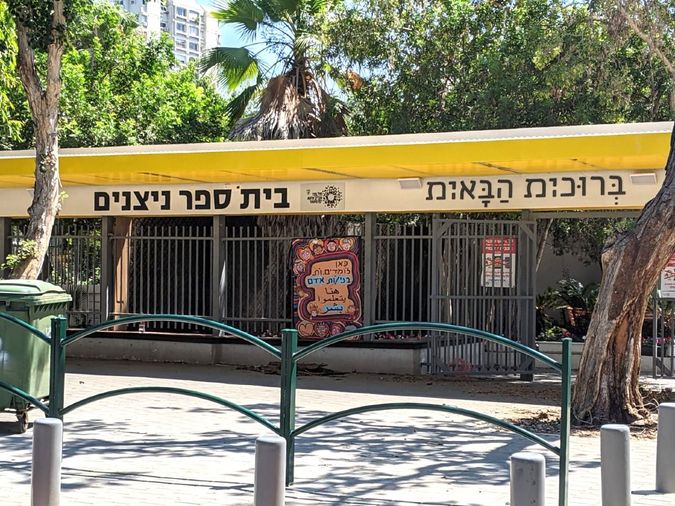 A school in the Tel Aviv area has adopted Michal Shomer’s “multi-gendered” Hebrew letters in a sign that welcomes children to school. Courtesy of Michal Shomer

“As a feminist, and as a citizen, I am committed to using my skills and my education for social change,” said Shomer, 30. “That’s why I designed these letters.

But as many have applauded Shomer for revising Hebrew to reflect more modern views of gender, conservative critics accuse her of taking part in an anti-religious, radical plot to undermine traditional Jewish values. And some have organized successful campaigns to convince groups that had embraced Shomer’s alphabet to stop using it.

“I never thought so many people would object so strongly to my project,” said Shomer, who received a bachelor’s degree in visual communication design in 2019 at the Holon Technology Institute, a college in a suburb of Tel Aviv. “The letters are meant to make a contribution to inclusivity and equality in Israeli society. How can anyone be opposed to that?”

His and hers grammar

Like Spanish and French, Hebrew is a gendered language: nouns are either masculine or feminine. Verbs, adverbs, numbers and adjectives are written and pronounced to agree with the gender of the noun.

What many find sexist in Hebrew is that when speakers or writers refer to a group of people, the male form predominates. Even when there are hundreds of women and only one man in a room, they are all addressed in the male plural.

“Women are supposed to get used to the idea that whenever we walk into a classroom, a public building — even when we read signs on public transportation – we are supposed to see ourselves as ‘included,’” Shomer said.

But the reality, she continued, is that Hebrew excludes women, and non-binary people too: “The language says that if you are not male, you are not there, or are not supposed to be there.”

The predominance of maleness in Hebrew is not just tradition. According to the Academy for the Hebrew Language, established by law in 1953 to oversee the development of the language, the male form should be regarded as both male and neutral – and is therefore appropriate for use for females.

Shomer and others point to the work of linguists who have concluded that language that makes male the default reinforces the idea that the male is standard and powerful. The graphic artist decided that she could help Hebrew evolve to give women and non-binary people equal standing.

Hebrew has 22 letters and five vowels. To that Shomer’s aleph bet adds 11 consonants and one vowel. The new letters may look quizzical to some, but at the same time familiar to Hebrew speakers in that they visually combine existing letters. One of her new letters, for example, looks like a mash-up of a “yud” and “vav.”

“All People Are Equal” using new Hebrew letters that allow the words in the gendered language to be read as male or female. Traditional Hebrew calls for the male form only.

But the new letters don’t have their own pronunciations. It’s up to the reader to choose which part of the letter — the masculine or feminine — to apply for any given word. Visually, Shomer said, they include everybody.

“Anyone who reads these letters can visually identify both the masculine or feminine forms – but knows that, at the same time, they refer to all genders simultaneously,” explained Shomer.

She hopes they will make people think about inclusivity and that gender equality is a problem yet to be solved. “I think that our language is developing and, over the years, we will come to solutions for the spoken word, too,” she added.

Shomer is not the first to try to adapt the language to be more inclusive. Other attempts include the use of a slant (somewhat akin to s/he) and a strategically-placed dot. But many find these markings awkward and Shomer’s aleph bet easier to use. Just weeks after she published them online, they began showing up in advertising and welcome signs in public buildings.

Some school systems invited students to use Shomer’s letters in classrooms, the Knesset Committee for Gender Equality put them on office signs and the Israeli Air Force — where women are clearly in the minority — began to use them on its bases. 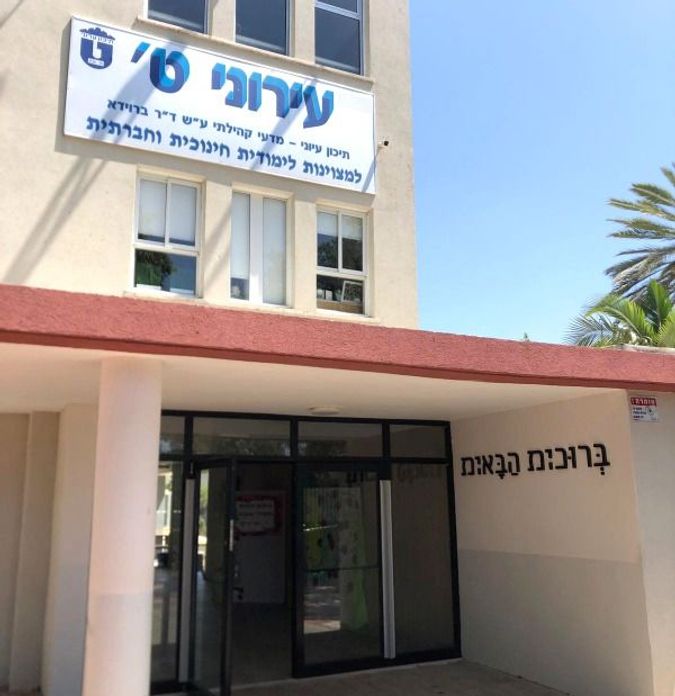 A school in the Tel Aviv area posted a welcome sign next to its front doors using Michal Shomer’s multi-gendered Hebrew letters. Courtesy of Michal Shomer

‘A Marxist and radical feminist’ plot

But as many began to embrace Shomer’s work, it was also stridently denounced, evidence to some of Israel’s growing anti-feminist movement.

Critics called Shomer’s letters a degradation and abuse of the Hebrew language, and warned that they are part of an American-backed, left-wing conspiracy to undermine traditional Jewish values. There were complaints about public funds being used to impose fringe political ideologies on Israelis. And one conservative critic called it an affront to the victims of the Holocaust.

“We must constantly be vigilant,” said Na’ama Sela, an attorney who heads The Forum for the Protection of the Family, a conservative umbrella group. “Radical feminists and their allies, who want to destroy our world as we know it, are encroaching on us. They are extremely well-funded, especially by groups from abroad and Jewish groups from America, who want to impose their life views on us here in Israel and destroy the Jewish family.”

Furthermore, she added, “After the catastrophe of the Holocaust, it is our duty to hold on to our national characteristics, to increase our numbers, to inculcate our children with pride in their tradition, our state, and our religion.”

Dalit Suter, an editor and translator who heads the Shapira Forum, a right-wing group of intellectuals, denounced Shomer’s alphabet as an example of how “Marxist and radical feminist” ideologies are infiltrating Israeli society.

“We see what is happening in America, and it will happen here, too,” she warned. “[Former U.S. President Donald] Trump was able to keep the anarchists and the radical feminists at bay, but now that [President Joe] Biden is in, we see that they have invaded the classrooms. Young children, including Jewish children, are forced to declare their so-called gender identity in school, and to ‘decide’ if they are male or female, as if that were ever a decision or a question.”

Sela sent a letter to the head of an HMO that had adopted it, writing that, “This isn’t merely about a cute little dot or a set of nice letters, it’s about protecting our society from a radical feminist agenda that wants to erase the difference between men and women.”

Initially, the HMO responded that it was “proud to lead the way in the use of multi-gendered language….We love the Hebrew language deeply and love to see it change and develop.”

But then Sela organized a letter-writing campaign, and after the HMO received some 1,500 letters, it reversed course, explaining that it had consulted with the Academy for the Hebrew Language, and would respect its authority. 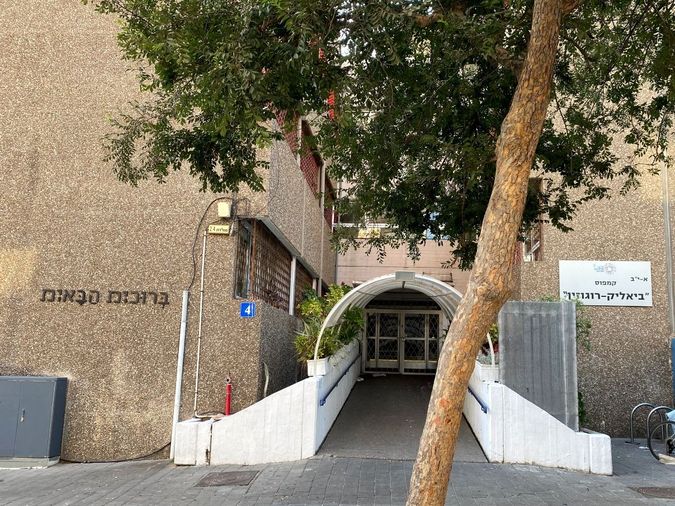 To the left of its entrance, a school in the Tel Aviv area posted a welcome sign using Michal Shomer’s multi-gendered Hebrew. Courtesy of Michal Shomer

And having heard that some teachers and students were beginning to use multi-gendered Hebrew signs, Sela contacted Shosh Nagar, head of religious schools within the Ministry of Education. In response, Nagar formally forbade the use of any form of multi-gender writing in all levels of religious schools, stating that this “phenomenon must be uprooted from the source.”

In the same vein, lawyers from B’Tzalmo, which describes itself as a human rights organization guided by Jewish values, wrote to the chief of staff and commander of the Air Force: “The Israel Defense Forces must realize that its strength does not come from fighting ideological fights for marginal groups in society.”

And to the heads of the Home Front Command, who had put up a welcoming sign at a COVID-19 vaccination center, they wrote, “This ‘language’ was invented in the gender departments, with the purpose of encouraging multiple and non-binary sexual identities…the Hebrew language is part of our national and Zionist identity.”

The IDF did not respond to questions from the Forward about Shomer’s alphabet, but a soldier serving in the Air Force revealed, on condition of anonymity, that signs using it had been taken down at several bases.

Elana Sztokman, author of The War on Women in Israel: A Story of Religious Radicalism, said she is not surprised at the intensity of the backlash.

“Using egalitarian, multi-gender and non-binary language is something that we all can and must do, to create social change. It may seem small, but it’s huge, and that is why it creates such a ferocious response.”