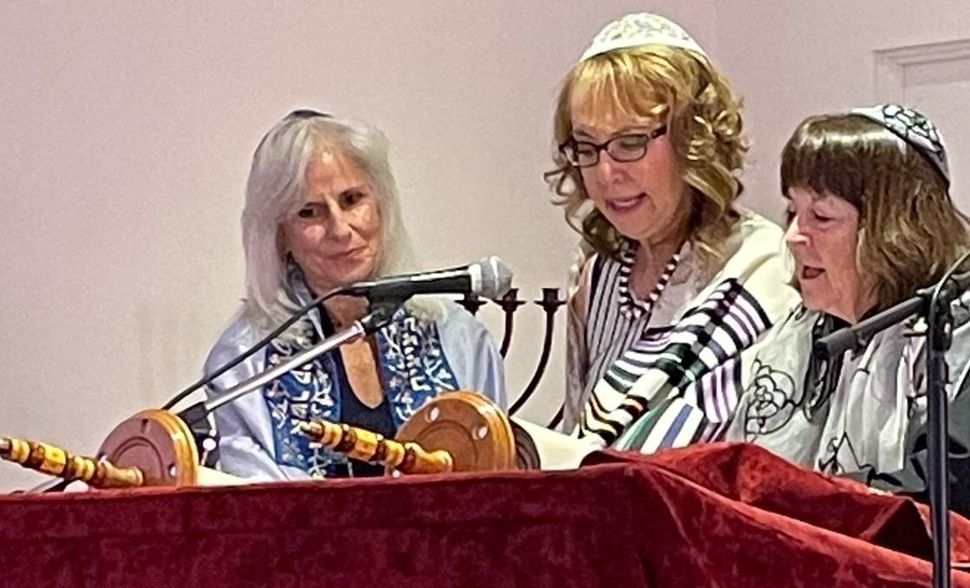 As former U.S. Rep. Gabby Giffords stood before the congregation of Temple Chaverim in Tucson, Ariz., and kissed her tallit, preparing to chant from the Torah for her bat mitzvah, Rabbi Stephanie Aaron placed her hand atop Giffords’ hand, her voice rising and falling along with Giffords’ own.

It was an emotional moment two decades in the making.

Learning to chant a Torah portion in Hebrew, studying the meaning of the text and offering an interpretation to the congregation, not to mention memorizing all the prayers that accompany the ceremony, can be a lot for anyone, whether you’re 13 or 51. But Giffords’ bat mitzvah, held on the last Saturday of November, also came with additional challenges, and concluded a long, hard journey.

Giffords first approached Aaron in the early 2000s, when the politician was serving in the Arizona legislature, wanting to know more about her Jewish roots. Her mother is a Christian Scientist, her father was Jewish. His father was a rabbi, descended from a long line of Lithuanian rabbis.

Aaron and Giffords began to study together.

Then life – and a near-fatal injury – got in the way. 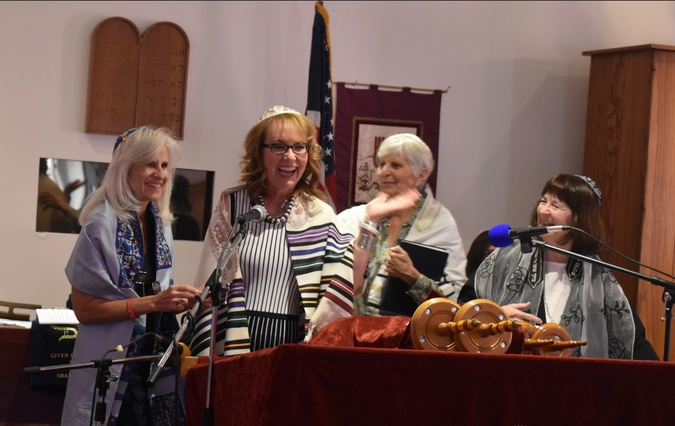 In 2011, Giffords was shot in the head in an attack that left six people dead and 13 injured at a Saturday morning constituent meet-and-greet outside a Safeway grocery store on the outskirts of Tucson. Giffords left office, but her work as an advocate continues as she lobbies for gun control and supports her husband, Mark Kelly, who was elected to the U.S. Senate in 2020.

Giffords had to learn to stand again in all kinds of ways. She continues to struggle with her speech.

“Gabby was shot through the left side of her brain,” her spokesperson Brian Wesolowski wrote in an email. “Her injuries include paralysis on the right side of her body and aphasia, which limits her ability to express her thoughts. Gabby continues to work on her recovery by committing many hours to speech and physical therapy.”

Giffords and Aaron stayed in touch through the years, and the topic of becoming a bat mitzvah came up several times. Then, two years ago, Giffords recruited three friends to stand alongside her and become b’nai mitzvah. Their meetings moved online during the pandemic.

The hard work resulted in a bat mitzvah service filled with “cascading joy,” as Aaron put it. Giffords and her friends prayed, chanted and shared the meaning of the experience with friends and family both in person and on Zoom.

That makes perfect sense to Aaron, who calls Giffords and her friends “she-roes,” a term she coined after rejecting the word heroine, as it sounds like an illegal drug, she said.

Aaron got as much out of studying with the women as they did from studying with her, the rabbi said. Amanda Freed, Giffords’ friend and yoga teacher, was part of the group, so they began each session with a chanted prayer but Aaron also incorporated mussar, an ancient practice incorporating self-reflection and meditation.

“We studied a lot of Jewish values. We studied justice and the pursuit of justice,” Aaron said.

When Ruth Bader Ginsburg died, they spoke of her work and its meaning, incorporating current events into the discussion whenever possible. They discussed the Torah portion of the week, and eventually studied their own.

“My Torah portion is from Genesis, from the story of Joseph,” Giffords wrote in response to questions from the Forward. “If you know Vayeshev you know it begins `And he lived.’ Any story that begins ‘and he lived’ is good with me. I lived. Everything afterwards is a gift.

“My portion is about Joseph’s dream. It’s complex. The dream gets Joseph in a lot of trouble. But Joseph is also brave, he speaks of his dreams whether they get him in trouble or not. I am guided by a dream—the belief that we can, if we keep working, live in a safer America without so much gun violence. My dream is important, even when it isn’t easy.”

A longtime fan of Giffords, Aaron recalled leaving the lawmaker’s home after one of their first meetings and telling her husband, “We left the home of the woman who would have been the first female Jewish president.”

And now, Aaron added, “She’s just one of the most brilliant humans I’ve ever encountered. I know that’s still in there. And she’s able to sing.”

Giffords chanted her Torah portion along with Aaron and the rabbi read Giffords’ bat mitzvah speech for her, but Giffords chanted the prayers, sang along with the congregation and played “Amazing Grace” on the French horn near the conclusion of the service. 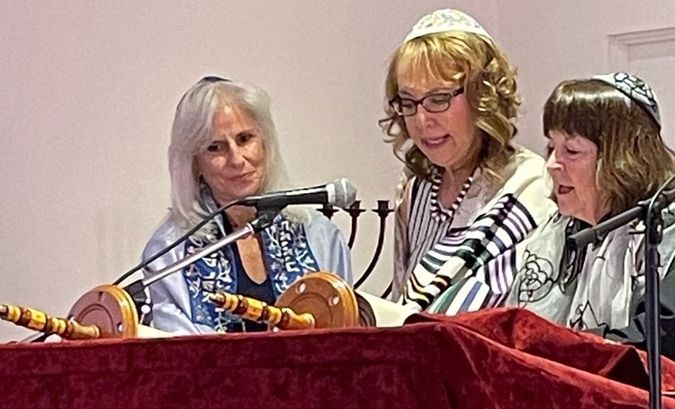 “She picks up the melodies, just like the French horn,” Aaron said.

Giffords wrote, “I am a person who is always looking for ways to grow, to keep moving and find new paths. I am proud and honored to become a bat mitzvah as an adult. It is never too late to explore faith, to learn the stories of the past and reflect on their meaning today.”

The event came at a particularly important time for Aaron, whose synagogue was defaced earlier this year, the target of antisemitic hate crimes. The once open space is now protected by security guards.

It’s the rabbi’s job to pick up the pieces and move on, Aaron said. Giffords’ bat mitzvah helped Aaron with that, she said.

“I learned so much from them,” she said of the women. “I learned a lot about courage, persistence.”

One can’t help but ask, how does a rabbi make sense of a God who would allow such a senseless act to rob a gifted leader of her ability to speak, to serve?

“It’s that ultimate question people ask. It’s not one of my questions,” Aaron said.

For Giffords, her Jewish studies have been an important source of strength.

“The story of the Jewish people is one of endurance, of bravery, of the will to keep going—and learning those stories has been a source of comfort and inspiration to me,” she wrote. “I’ve had to keep going, to believe I could keep moving, in my own life. So many people who’ve been injured, or suffered a loss, struggle to keep moving. I have the stories of Ruth, Rachel, and Deborah, among others, to guide me.”