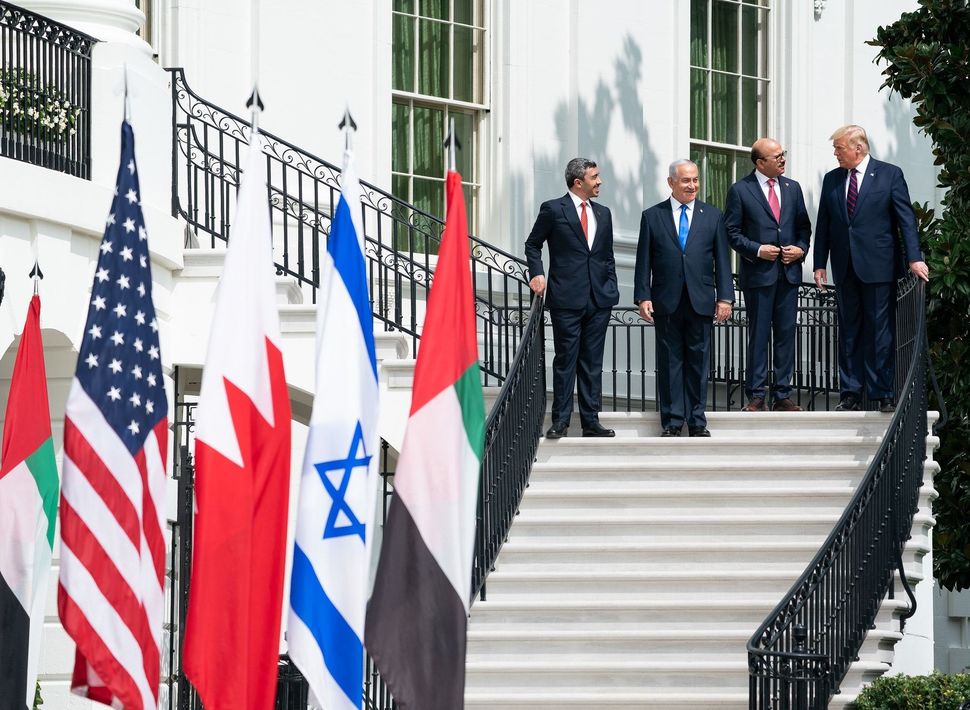 Former President Donald Trump worked on expanding the Abraham Accords from his hospital bed where he was being treated for a life-threatening case of COVID-19, hoping the positive news coming out of the Middle East would distract the country’s attention away from his illness, his former chief of staff reveals in a new memoir.

“Still in Walter Reed, President Trump turned his attention to the Abraham Accords,” Mark Meadows, who served as Trump’s fourth chief of staff during the 2020 election year, writes in his forthcoming book, titled “The Chief’s Chief,” set to be released on Tuesday and reviewed by the Forward.

In the book, Meadows details a meeting he had with Trump on Saturday afternoon, a day after the former president was admitted to the Walter Reed National Military Medical Center and ahead of his address to the nation. Trump was obsessed about what was written about him in the daily newspapers. White House staff used to cut out the positive articles for the president, who would write a note in a black sharpie and mail it to the person who wrote it. On the table of the room in the presidential suite that day, he writes, were stacked newspapers that the Secret Service had brought in for him.

“He saw the press’s initial burst of enthusiasm as a wave that we could ride to a complete deal, which he hoped would eventually include participation from Sudan, Morocco, and Saudi Arabia,” Meadows writes.

While the administration was making progress with Morocco and Sudan, Trump seemed worried at the time about losing momentum in the final weeks of the presidential campaign. The negotiations between Jared Kushner, Trump’s son-in-law and senior advisor, his aides and Saudi Arabia “were moving very slowly,” Meadows recounts. “The boss knew that there had been back-channel negotiations that could normalize the relationship between Saudi Arabia and Israel, and he was eager to turn these into a public show of support.”

Meadows writes that he told Trump “the team would work on it, and the president went back into his room to rest.”

Meadows writes that when he entered the Oval Office after Trump’s return to the White House to inform him that Sudan had agreed to become the fourth country to normalize relations with Israel, Trump “had a certain raising of his eyebrows and a subtle nodding of the head that let me know he was pleased.”

Meadows writes that “to many outside the West Wing” the efforts that Trump’s team put in to secure the Abraham Accords “was a fool’s errand.”

The media “and even some conservatives believed that if professional politicians — many of whom had made it their life’s work to achieve peace — couldn’t get it done then how were a businessman from New York and his son-in-law ever going to do it?” he writes.

“All through the spring and the summer of 2020, I listened in on meetings between Jared and his team, giving reports to President Trump about the progress we were making.”

According to Meadows, by the time Trump delivered his 4th of July speech at Mount Rushmore in South Dakota, “we were on the verge of breakthrough.”

Kushner and Berkowitz, the White House Mideast peace envoy, he writes, “had arranged high-level meetings between emissaries of several Arab countries and Israel, and we were planning on holding the signing ceremony sometime in the fall.” 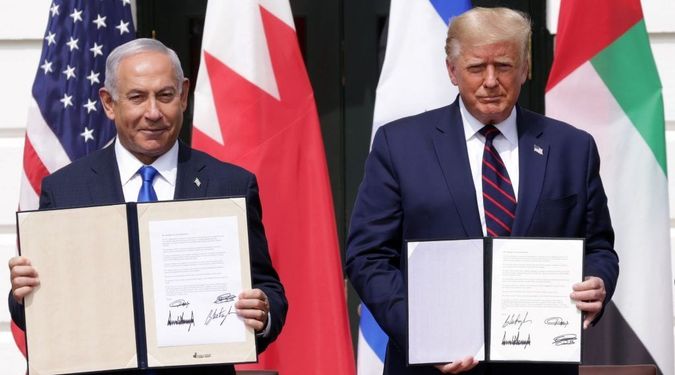 Israel Prime Minister Benjamin Netanyahu and U.S. President Donald Trump participate in the signing ceremony of the Abraham Accords on the South Lawn of the White House in Washington, D.C., Sept. 15, 2020. Photo by Alex Wong/Getty Images

The announcement that Israel and the United Arab Emirates agreed to normalize relations occurred on August 13, 2020. Bahrain, Sudan and Morocco followed with similar announcements, which were dubbed as the Abraham Accords. A signing ceremony with then Israeli Prime Minister Benjamin Netanyahu and representatives of the UAE and Bahrain took place at the White House in September. The Sudan deal was announced during a phone call with the leaders of Israel and Sudan on October 23.

“Once again, President Trump and his team had done the impossible,” Meadows concludes the chapter.

Also in the book, Meadows details his role, in his previous job as a congressman from North Carolina and chair of the House Freedom Caucus Chairman, in lobbying Trump to recognize Jerusalem as Israel’s capital and move the U.S. embassy from Tel Aviv to Jerusalem.

It was after Trump signed his first and only national security waiver on June 1, 2017, to delay the relocation of the embassy by six months as required by law, that Reince Priebus, the then-White House chief of staff, and advisor Steve Bannon urged him to bring up the issue that he had advocated for with the president. 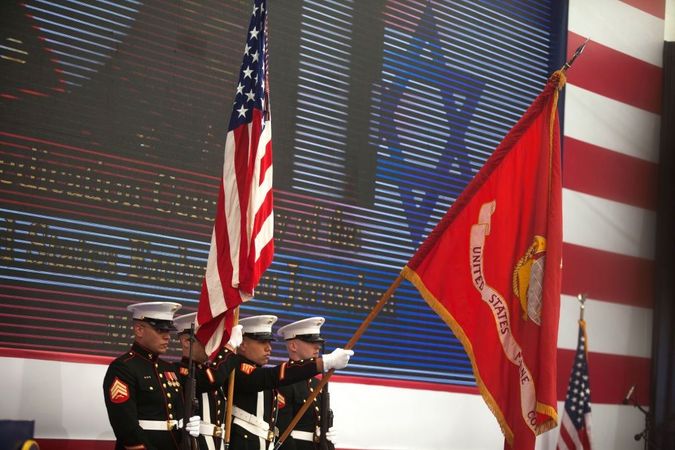 White House senior advisor Ivanka Trump and US Treasury Secretary Steven Mnuchin arrive to the opening of the US embassy in Jerusalem on May 14, 2018 in Jerusalem, Israel. Image by Getty Images

It was during that Oval Office meeting — at which he first discovered Trump’s “Diet Coke button,” a little red box on his desk that resembles the nuclear button that he used to summon a butler to bring in a Diet Coke on a silver platter — that Trump assured him he wouldn’t issue another waiver.

Among the questions that Trump asked him about was “which of his constituents believed it was the right thing to do?” Meadows writes.

During the 2020 presidential campaign, Trump boasted that the embassy move was done to satisfy his Evangelical base. “The Evangelicals are more excited about that than Jewish people,” he said at an August 18 campaign rally.